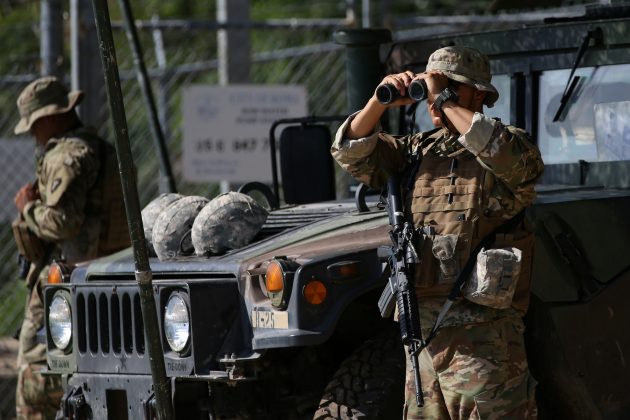 FILE PHOTO: Members of the Texas National Guard watch the Mexico-U.S. border from an outpost along the Rio Grande in Roma, Texas, U.S., April 11, 2018. REUTERS/Loren Elliott

WASHINGTON (Reuters) – The state of California has opted not to take part in the Trump administration’s effort to send National Guard troops to the country’s southern border with Mexico, a Defense Department official said on Monday.

Robert Salesses, a deputy assistant secretary at the Defense Department, said at a media briefing that California has declined a request to commit more than 200 troops to the effort. Salesses said talks with California are ongoing.

Lieutenant Colonel Tom Keegan, a spokesman for the California National Guard, said in a statement that “state officials have not rejected anything” since California Governor Jerry Brown responded last week with a proposed agreement.

Tyler Houlton, a spokesman for Homeland Security, said Brown “shares our interest in securing our southern border. DHS and our federal partners are committed to working with the governor to mobilize the California National Guard to assist DHS’s frontline personnel in our vital missions.”

Ronald Vitiello, acting deputy commissioner at U.S. Customs and Border Patrol, said Monday California may be willing to take part in other missions but Brown had determined that some tasks sought for assistance were “unsupportable.”

Trump has been unable to get the U.S. Congress or Mexico to fund his proposed wall along the border. National Guard troops will not construct any sections of a proposed border wall, officials said Monday.

National Guard troops are not taking part in direct border security and are not performing law enforcement work.