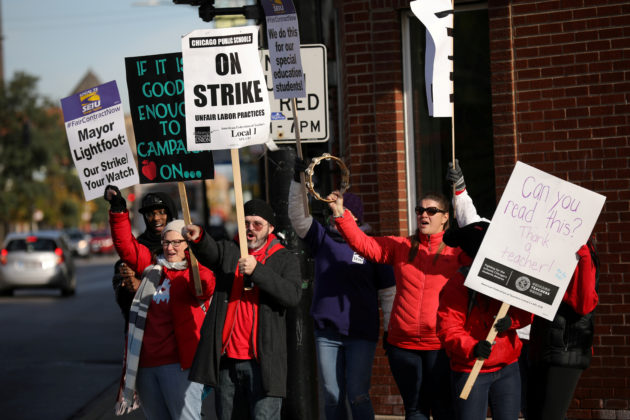 CHICAGO (Reuters) – Chicago teachers threatened to stop working altogether if the district retaliates against any of them who failed to report to school buildings on Wednesday to prepare to resume in-person learning for tens of thousands of students next week.

Chicago Teachers Union (CTU), which represents 25,000 public school educators, has been locked in negotiations with Chicago Public Schools (CPS) for months over a plan to gradually reopen schools for the system’s 355,000 students. Teachers are demanding stronger safety protocols to prevent the spread of the coronavirus inside the classroom.

The labor dispute came to a head on Sunday when the rank and file union membership voted 71% in favor of a resolution not to return to the classroom and to remain teaching remotely until a stronger health and safety agreement is reached.

Despite the vote, the district ordered some 10,000 teachers to report to work on Wednesday, instead of Monday as initially planned. Some 70,000 elementary and middle school students who opted to take classes both in-person and online are due to return at the beginning of next week.

“Of course we take your health and safety incredibly seriously,” Chicago Mayor Lori Lightfoot said to teachers during a news conference on Tuesday night. “But you need to work with us, you need to talk to your leadership, because we can’t get there unless we get there together.”

As of early Wednesday afternoon, it was unclear how many teachers reported for work at their schools. The district and union were not immediately available for comment.

The district has yet to announce when high school students will have the option to return to school buildings.

Similar labor battles have unfolded across the country, pitting teacher unions against district officials over conditions for reopening, almost a year after the virus shut down schools for 50 million students nationwide.

In the current dispute, the union contends that classrooms lack proper ventilation and that the district has failed to provide cleaning supplies and personal protective equipment. The district says ventilation meets industry standards for classroom learning and that it would provide schools with adequate PPE.

The union also wants the district to make accommodations for teachers who have family members who have medical conditions. It also wants the CPS to spell out metrics to determine when to open and close schools, according to the union.