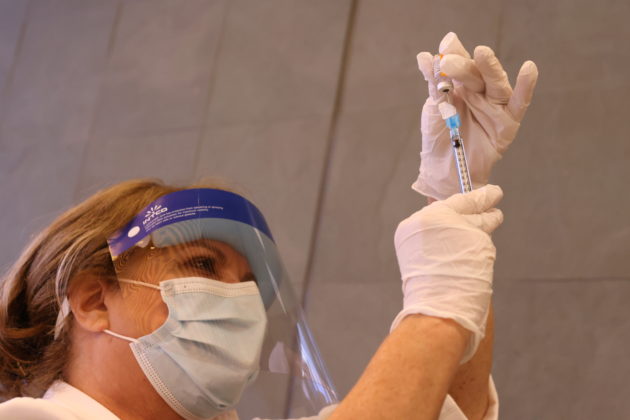 By Susan Heavey and Sharon Bernstein

WASHINGTON (Reuters) – An unrelenting U.S. coronavirus surge pushed besieged hospitals further to the brink as the United States pressed on with its immunization rollout on Thursday and prepared to ship nearly 6 million doses of a new vaccine on the cusp of winning regulatory approval.

COVID-19 hospitalizations rose to record heights for a 19th straight day, with nearly 113,000 coronavirus patients counted in U.S. medical facilities nationwide on Wednesday, while 3,580 more perished, the most yet in a single day.

The virus has claimed over 311,000 lives in the United States to date, and health experts have warned of a deepening crisis this winter as intensive care units (ICUs) fill up and hospital beds spill over into hallways.

“We expect to have more dead bodies than we have spaces for them,” Los Angeles Mayor Eric Garcetti said at a briefing on Thursday, adding that the country’s second-largest city had fully exhausted its ICU capacity.

The number of U.S. cases rose by at least 239,018 on Thursday, according to a Reuters tally, the highest one-day increase since the pandemic began, driving the number of known infections nationally to more than 17 million.

The tolls mounted as U.S. regulators weighed whether to grant emergency use authorization for a vaccine developed by Moderna Inc, just a week after an earlier vaccine from Pfizer Inc and German partner BioNTech SE won consent for mass distribution.

A panel of outside advisers to the U.S. Food and Drug Administration overwhelmingly endorsed Moderna’s vaccine candidate for emergency use after a daylong meeting on Thursday. FDA authorization could come as soon as Friday.

Both vaccines require two doses, given three or four weeks apart, for each person inoculated.

The initial 2.9 million doses of the Pfizer/BioNTech vaccine began shipping on Sunday and were still making their way to hospitals across the country and into the arms of doctors, nurses, and other frontline medical professionals.

Some of the first shots were also going to residents and staff of long-term care facilities. Other essential workers, senior citizens and people with chronic health conditions will be next on the list.

It will take several months before vaccines are widely available to the public on demand, and opinion polls have found many Americans are hesitant about getting inoculated.

Some are distrustful of immunizations in general, and some are wary of the unprecedented speed with which the first vaccines were developed and rolled out – 11 months from the first documented U.S. cases of COVID-19.

Health authorities have sought to reassure Americans that large-scale clinical trials and rigorous scientific review found the vaccines to be safe as well as highly effective at preventing illness.

Those messages have been combined with urgent pleas for Americans to remain diligent about social distancing and mask-wearing until immunizations become widely available.

Data shows infections continuing to spread virtually unabated across much of the country, apparently fueled by increased transmissions of the virus as many Americans disregarded warnings to avoid social gatherings and unnecessary travel over the Thanksgiving holiday last month.

California has been hit particularly hard in recent weeks, with many of its hospitals reporting ICUs at or near capacity, a dire situation that triggered a renewal of sweeping stay-at-home orders across much of the state.

“Hospitals and healthcare workers continue to be stretched to the limit, as we continue to surge beyond even what we anticipated. And we’re not even through the holidays yet,” said Adam Blackstone, a spokesman for the Hospital Association of Southern California.

In San Bernardino County, where available ICU space was down to zero, newly admitted patients at Arrowhead Regional Medical Center were lined up in beds in corridors waiting for care, spokeswoman Justine Rodriguez told Reuters.

With the strain taking a growing toll on medical staff, the race to expand vaccinations is seen as critical to preventing a collapse of healthcare systems.

Health and Human Services Secretary Alex Azar told CNBC on Thursday that 5.9 million Moderna vaccine doses had been allotted for state governments to receive and were ready to distribute nationwide starting at the weekend.

The Moderna vaccine has less onerous cold storage requirements than the Pfizer/BioNTech shot, making it a better option for remote and rural areas.

Nevertheless, ambivalence over the vaccine has emerged even among pockets of healthcare workers designated as first in line for inoculation.

“Some are on the fence. Some feel that we need to get it done. It’s split down the middle,” Diego Montes Lopez, 28, a phlebotomist at Martin Luther King Jr. Community Hospital in South Los Angeles, said of co-workers after getting injected himself.

But Dr. Simon Mates, an ICU co-medical director at Dignity Health California Hospital Medical Center in downtown Los Angeles, said the physicians and nurses he knows view the vaccine as having arrived at a crucial moment.

“Our biggest concern was: ‘What if one of us gets sick?’ But now with the vaccine, that concern seems to be ebbing,” said Mates, who learned Wednesday that he had already received the vaccine, rather than a placebo, as a participant in the Pfizer trials. “It’s one less thing to worry about.”