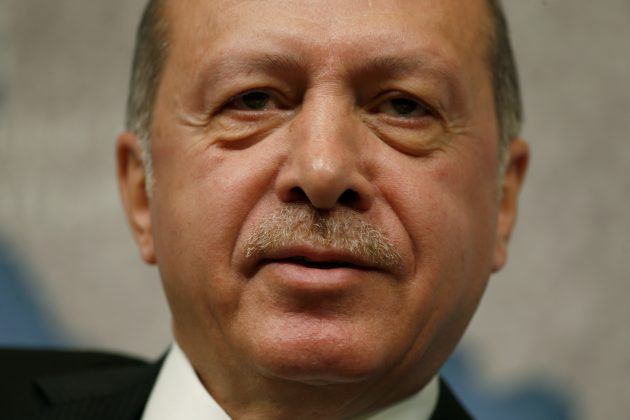 By Dominic Evans and Birsen Altayli

ISTANBUL (Reuters) – President Tayyip Erdogan is driving Turkey “to the cliff” through ideological politics and a determination to control the central bank, the main opposition party’s presidential candidate said on Wednesday as the lira hit new record lows.

Muharrem Ince, who seeks to end Erdogan’s 15-year hold on power in next month’s elections, said the central bank and other economic institutions must be able to operate independently.

Erdogan said this week he plans to take greater control of the economy after the June 24 presidential and parliamentary polls, comments which drove the lira to fresh record lows. It is down 15 percent against the dollar this year.

“He’s taking the country to the cliff. The central bank needs to be independent, and the other economic bodies need to be autonomous. The rules need to operate,” Ince told Reuters in an interview.

The victor in next month’s election, held under a state of emergency imposed after a failed coup in 2016, will exercise sweeping new executive powers after Turks narrowly approved a constitutional overhaul in a referendum last year. The changes come into effect after the June vote.

Polls show Erdogan is comfortably the strongest candidate, though he could face a challenge if the presidential vote goes to a second round in July and his opponents rally around the other remaining candidate.

Ince, 54, a combative parliamentarian and former physics teacher, has energized his secularist opposition Republican People’s Party (CHP) since he started campaigning and may emerge as the leading opposition candidate – although he faces competition from former interior minister Meral Aksener.

Aksener’s nationalist Iyi (Good) Party and the CHP have joined with two other smaller parties in an opposition alliance for the parliamentary election. She and Ince are competing separately in the presidential vote.

Ince said the president was driven by “ideological obsessions” and pushing Turkey in the wrong direction.

Erdogan, a self-described “enemy of interest rates”, wants lower borrowing costs to boost credit and new construction, and has said the central bank will not be able to ignore the president’s wishes. That has fueled concerns about the bank’s ability to fight double-digit inflation.

Since his Islamist-rooted AK Party swept to power in 2002, Erdogan has dominated Turkish politics. His power is reinforced by a near-monopoly of broadcast media coverage. Most TV channels show nearly all his campaign rallies, but rarely offer a platform to his opponents.

“The state of the media is heartbreaking. They have surrendered, they have kneeled,” Ince said, adding he had told broadcasters that unless they started to cover his speeches, he would hold a rally directly outside their offices to shame them.

If elected, Ince pledged to reverse some of the powers granted to the new presidency, saying it handed total control of the budget, judiciary and executive to one person.

Several European Union countries have expressed alarm that those changes are pushing Turkey deeper into authoritarian rule. Turkey is still a candidate for EU membership, though negotiations have stalled over rights concerns and other issues.

Erdogan says the increased powers are necessary to tackle security threats following the failed coup and conflict on Turkey’s southern borders with Syria and Iraq.

“No mortal should be given such authority,” Ince said. “It shouldn’t be given to me either.”

Against Erdogan, a skilled campaigner, the CHP has struggled to win support beyond its core base of secular-minded voters. In the last parliamentary election in November 2015 it took 25.3 percent of the vote.

Ince has pledged to be a non-partisan leader if elected, styling himself as “everyone’s president” and promising not to live in the 1,000-room palace built by Erdogan in Ankara.

“I see that a wind of change is blowing,” he said, pointing to what he described as a new atmosphere at his political rallies compared to last year’s referendum campaign.

“The momentum I have garnered is very different – there is a strong wind and people feel excitement,” he said.