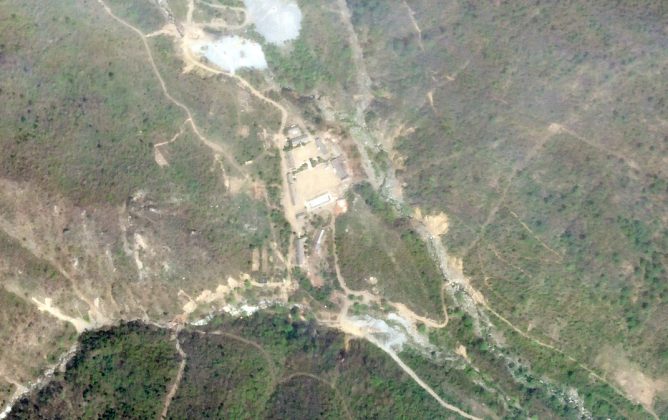 A satellite photo of the Punggye-Ri nuclear test site in North Korea May 14, 2018. Planet Labs Inc/Handout via REUTERS

SEOUL (Reuters) – Satellite imagery shows North Korea dismantling facilities at its nuclear test site, but experts say the images can’t reveal whether it is the first step toward full denuclearization, or an attempt to cloak nuclear capabilities from outside observers.

North Korea’s intentions were thrown further into doubt on Wednesday, when it abruptly announced it may “reconsider” meeting with U.S. President Donald Trump in June if the United States continues to insist on unilateral denuclearization.

Commercial satellite imagery – including photos taken by Planet Labs as recently as May 14 – show North Korea removing some structures around its nuclear test site at Punggye-ri, experts say.

“So far it looks like the surface-level support structures are being dismantled,” said Scott LaFoy, an open source imagery analyst. “This would be consistent with the site being closed, as you need engineers and working teams on-site to prepare and maintain the site.”

Among the facilities that appear to have been razed are an engineering office, as well as buildings housing the air compressor used to pump air into the tunnels where the bombs were detonated, said non-proliferation expert Frank Pabian.

“This is entirely in keeping with the official North Korean news report that ‘technical measures’ associated with the shutdown were underway,” Pabian said.

North Korea has said it plans to use explosives to collapse the tunnels; “completely” block up the tunnel entrances; and remove observation facilities, research institutes and guard structures.

A limited number of foreign media have been invited to view the ceremonial closure of the site, but so far no international inspectors, leading some experts to suspect that North Korea is seeking to hide details of its nuclear capabilities.

“North Korea might seem like they’re being generous in holding this event, but this is the actual testing ground we’re talking about here – The smoking gun,” said Suh Kune-yull, professor of nuclear energy system engineering at Seoul National University. “It seems like they’re trying to erase any evidence of the nuclear capabilities they have.”

Bolton has proposed Trump and North Korean leader Kim Jong Un make a deal similar to the one that led to components of Libya’s nuclear program being shipped to the United States in 2004.

In 2011, Libyan leader Muammar Gaddafi was captured and killed by rebel forces backed by a NATO air campaign.

While the technical aspects of a North Korea deal could mirror some aspects of the Libya effort, Pyongyang has a much more advanced weapons program and Gaddafi’s fate is not encouraging, Andreas Persbo, the executive director of VERTIC, a London think tank that focuses on disarmament verification and implementation, said in a recent interview.

“Libya is a horrible example to make out of that perspective because of course the North Koreans have their own teams advising Kim Jong Un on what this meant, and they will highlight the fact that this is not a good solution for North Korea,” he said.

North Korea appears instead to be proposing a longer-term general commitment to “denuclearization of the Korean peninsula,” which could take years even under the best circumstances, experts say.

LaFoy said North Korea’s actions so far are “not necessarily nefarious,” but that it does raise some “red flags” about complete permanent denuclearization.

“That imagery tells us the site appears to be in the process of decommissioning,” he said. “But we can’t yet tell if it is going to be closed for years or something that can ultimately be reversed in a few weeks or months.”

(Additional reporting by Christine Kim in SEOUL and Malcolm Foster in TOKYO. Editing by Lincoln Feast.)