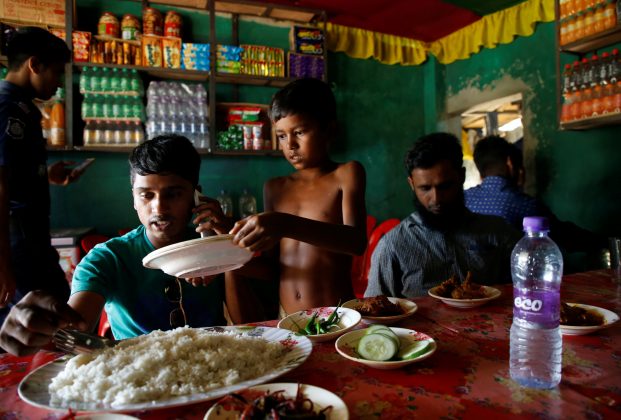 By Tom Allard and Tommy Wilkes

COX’S BAZAR/KUTUPALONG, Bangladesh (Reuters) – Rohingya refugee children from Myanmar are working punishing hours for paltry pay in Bangladesh, with some suffering beatings and sexual assault, the International Organisation for Migration (IOM) has found.

Independent reporting by Reuters corroborated some of the findings.

The results of a probe by the IOM into exploitation and trafficking in Bangladesh’s refugee camps, which Reuters reviewed on an exclusive basis, also documented accounts of Rohingya girls as young as 11 getting married, and parents saying the unions would provide protection and economic advancement.

About 450,000 children, or 55 percent of the refugee population, live in teeming settlements near the border with Myanmar after fleeing the destruction of villages and alleged murder, looting and rape by security forces and Buddhist mobs.

Afjurul Hoque Tutul, additional superintendent of police in Cox’s Bazar, near where the camps are based, said 11 checkpoints had been set up that would help prevent children from leaving.

“If any Rohingya child is found working, then the owners will be punished,” he said.

Most of the refugees have arrived in the past two and a half months after attacks on about 30 security posts by Rohingya rebels met a ferocious response from Myanmar’s military.

Described by the United Nations human rights commissioner Zeid Ra’ad Al Hussein as a “textbook example of ethnic cleansing”, Myanmar’s government counters that its actions are a proportionate response to attacks by Rohingya “terrorists”.

The IOM’s findings, based on discussions with groups of long-term residents and recent arrivals, and separate interviews by Reuters, show life in the refugee camps is hardly better than it is in Myanmar for Rohingya children.

The IOM said children were targeted by labor agents and encouraged to work by their destitute parents amid widespread malnutrition and poverty in the camps. Education opportunities are limited for children beyond Grade 3. 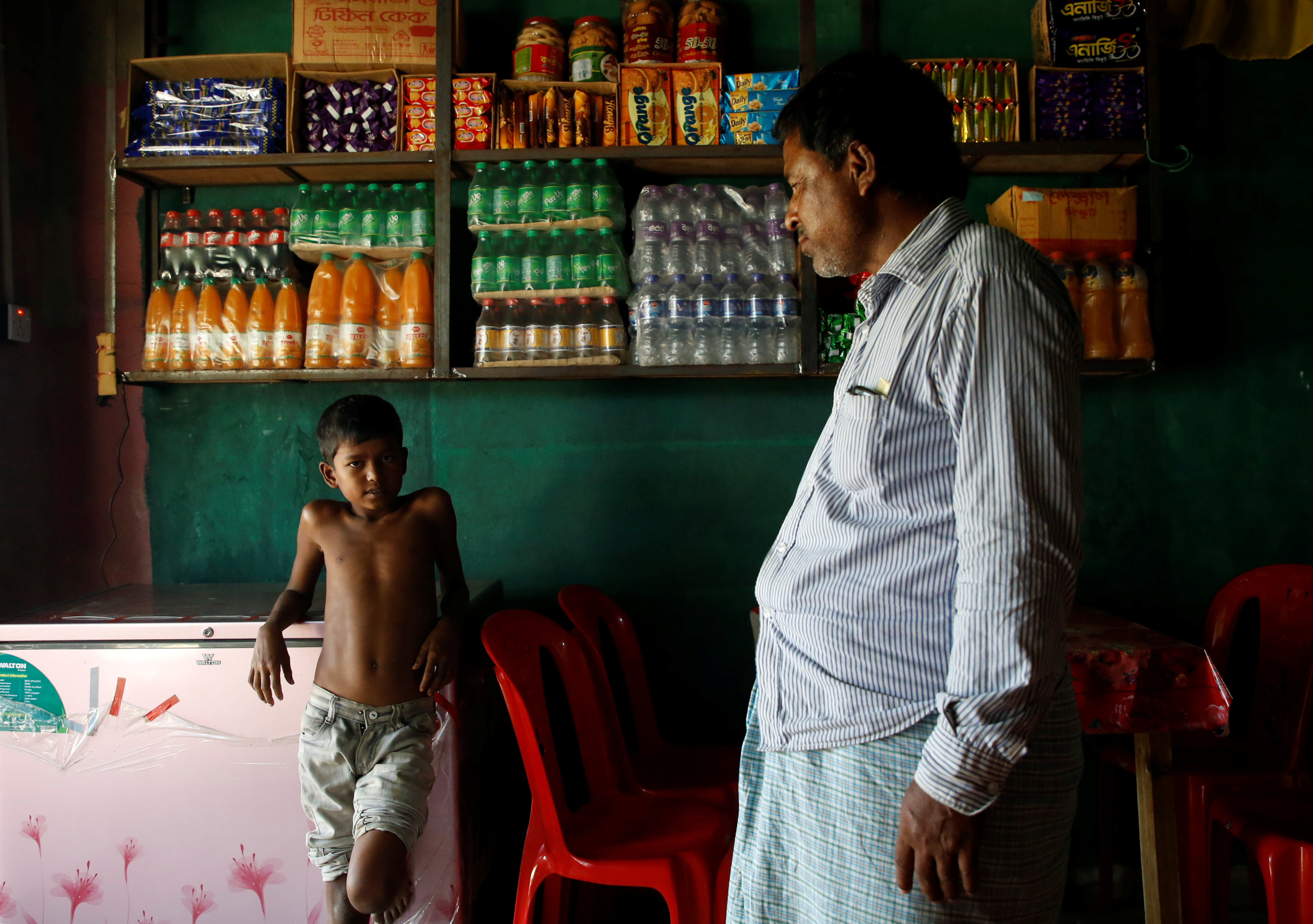 Rohingya boys and girls as young as seven years old were confirmed working outside the settlements, according to the findings.

Boys work on farms, construction sites and fishing boats, as well as in tea shops and as rickshaw drivers, the IOM and Rohingya residents in the camp reported.

Girls typically work as maids and nannies for Bangladeshi families, either in the nearby resort town of Cox’s Bazar or in Chittagong, Bangladesh’s second-largest city, about 150 km (100 miles) from the camps.

One Rohingya parent, who asked not to be identified because she feared reprisals, told Reuters her 14-year-old daughter had been working in Chittagong as a maid but fled her employers.

When she returned to the camp, she was unable to walk, her mother said, adding that her daughter’s Bangladeshi employers had physically and sexually assaulted her.

“The husband was an alcoholic and he would come to her bedroom at night and rape her. He did it six or seven times,” the mother said. “They gave us no money. Nothing.”

The account could not be independently verified by Reuters but was similar to others recorded by the IOM.

Most interviewees said female Rohingya refugees “experienced sexual harassment, rape and being forced to marry the person who raped her”, the IOM said. 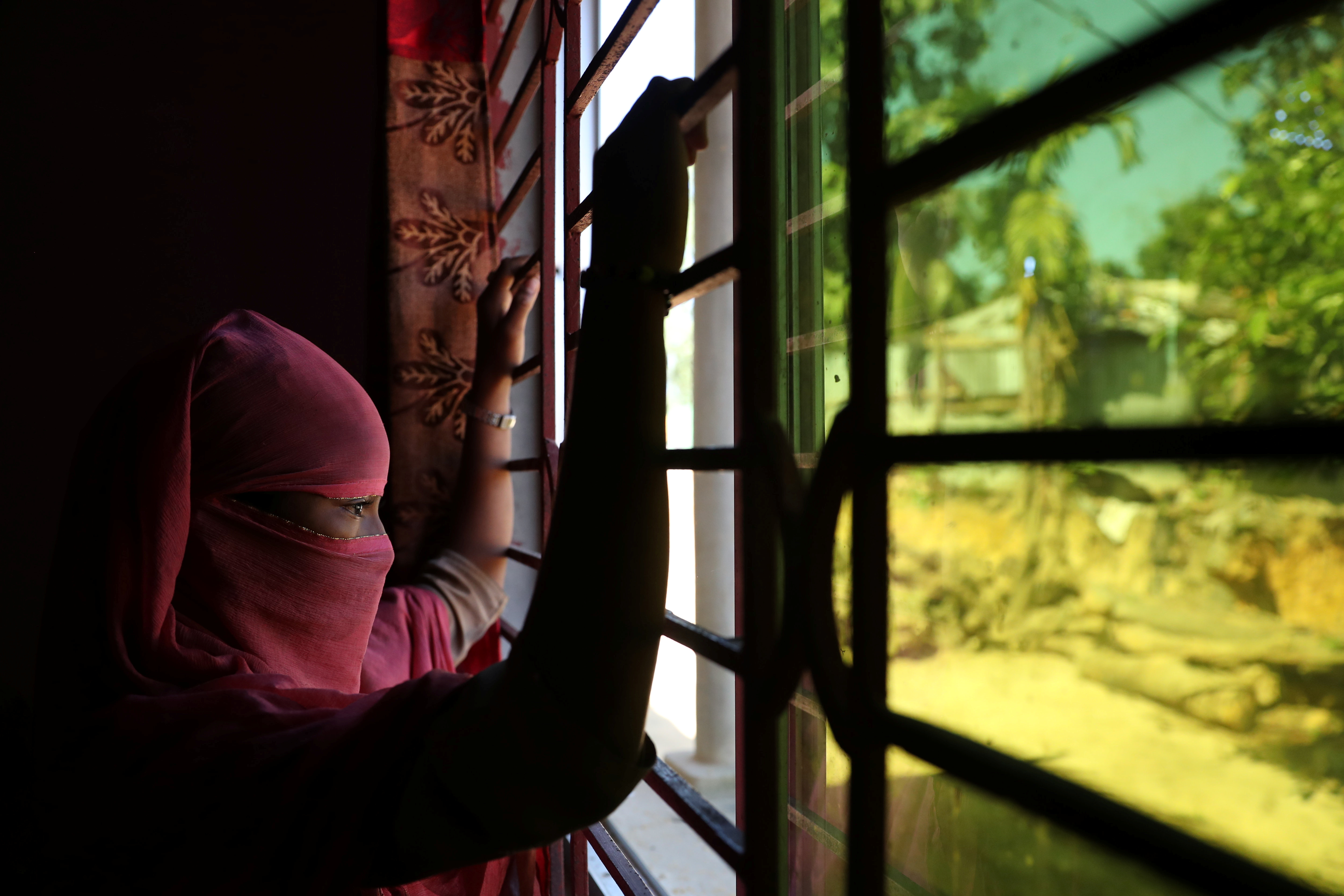 A 12 year old Rohingya girl who worked as domestic help in a house in Bangladesh, looks out the window at an undisclosed location near Cox’s Bazar, Bangladesh, November 8, 2017. REUTERS/Mohammad Ponir Hossain

PAID A PITTANCE, IF AT ALL

The Inter Sector Coordination Group, which oversees UN agencies and charities, said this month it had documented 2,462 unaccompanied and separated children in the camps. The actual number was “likely to be far higher”, it said.

A preliminary survey by the UNHCR and Bangladesh’s Refugee Relief and Repatriation Commission has found that 5 percent of households – or 3,576 families – were headed by a child.

Muhammad Zubair, dressed in a dirty football shirt, his small stature belying his stated age of 12 years old, said he was offered 250 taka per day but ended up with only 500 taka ($6) for 38 days work building roads. His mother said he was 14 years old.

“It was hard work, laying bricks on the road,” he said, squatting in the doorway of his mud hut in the Kutupalong camp. He said he was verbally abused by his employers when he asked for more money and was told to leave. He declined to provide their identities.

Zubair then took a job in a tea shop for a month, putting in two shifts per day from 6am to past midnight, broken by a four-hour rest period in the afternoon.

He said he wasn’t allowed to leave the shop and was only permitted to speak to his parents by phone once.

“When I wasn’t paid, I escaped,” he said. “I was frightened because I thought the owner, the master, would come here with other people and take me again.”

Many parents also pressure their daughters to marry early, for protection and for financial stability, according to the IOM findings. Some child brides are as young as 11, the IOM said.

But many women only became “second wives,” the IOM said. Second wives are frequently divorced quickly and “abandoned without any further economic support”.

“Human traffickers usually adapt faster to the situation than any other response mechanism can. It’s very important we try to do prevention.” Ardanyan said.

“Funding dedicated to protecting Rohingya men, women and children from exploitation and abuse is urgently needed.”