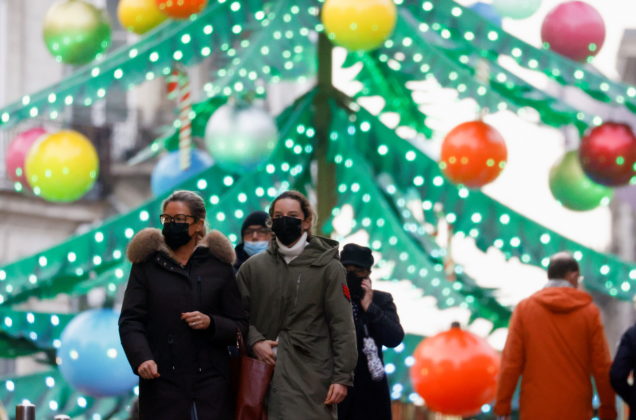 (Reuters) – A federal judge on Tuesday blocked the last of the Biden administration’s COVID-19 vaccine mandates for businesses, saying the government exceeded it authority with a requirement that millions of employees of federal contractors be inoculated.

* EU health ministers discussed measures to try to halt the spread of the Omicron variant, with the Netherlands calling for negative tests for incoming travelers from outside the bloc and France urging tests even for those arriving from EU states.

* France on Tuesday registered a surge in COVID-19 hospitalizations as a rise in new infections in mid-November led to an increase in patient numbers.

* Portugal’s health authority DGS gave the green light for the use of the Pfizer-BioNTech’s COVID-19 vaccine for children between the ages of five and 11.

* The party is over for Poles this holiday season with nightclubs set to close in the face of high COVID-19 case numbers, the government said, with the exceptions of, New Year’s Eve and New Year’s Day.

* The Norwegian government introduced stricter rules on Tuesday to limit the spread of COVID-19, including a cap on the number of visitors in private homes and shortening the hours bars and restaurants can serve alcohol.

* Canada will soon crack down on COVID-19 mandates, forcing banks, telecommunications companies and all other federally regulated workspaces to ensure their employees are inoculated.

* Mexico City officials will begin offering a third vaccine dose to residents over the age of 60, officials said.

* The Philippines economy is likely to grow faster than previously thought this year, but downside risks caused by the pandemic persist, the World Bank said.

* A nascent recovery in Asia-Pacific international travel demand has been set back by the Omicron variant as governments tighten rules, but airline bosses say they hope any backward moves will be short-lived.

* Up to one million COVID-19 vaccines are estimated to have expired in Nigeria last month without being used, two sources told Reuters, one of the biggest single losses of doses that shows the difficulty African nations have getting shots in arms.

* The African Union on Tuesday called for an urgent end to travel restrictions imposed on some of its member states, saying the measures effectively penalize governments for timely data sharing in line with international health regulations.

* The head of the European Medicines Agency said it could soon approve the vaccine developed by U.S. biotech company Novavax.

* New travel restrictions prompted by the Omicron variant have dealt a setback to the nascent recovery in international flights, creating delays and headaches in some regions, according to airline and airport officials.