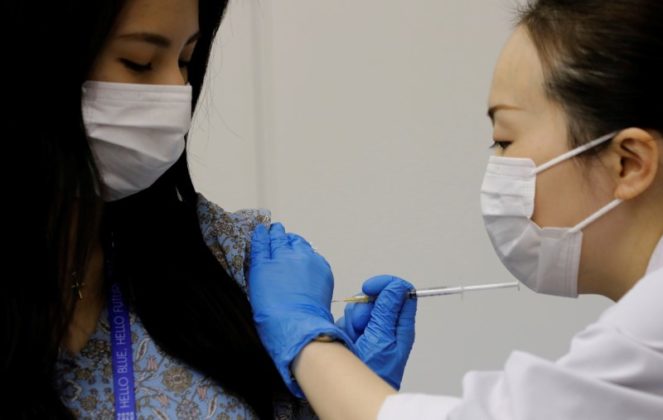 A staff of All Nippon Airways (ANA) receives a dose of the Moderna coronavirus disease (COVID-19) vaccine at the company's facility at Haneda airport in Tokyo, Japan June 14, 2021. REUTERS/Kim Kyung-Hoon

(Reuters) – Olympics organizers capped the number of spectators at 10,000 for each venue of the 2020 Tokyo Games, days after experts said holding the event without fans was the least risky option during the pandemic.

* President Vladimir Putin said the coronavirus situation in some Russian regions was getting worse as authorities began promoting the idea of regular revaccinations to try to halt a surge in cases.

* French nightclubs will be allowed to re-open from July 9, government minister Alain Griset said, allowing the industry to operate for the first time since it was shut during the France’s COVID-19 lockdown in March 2020.

* As the Delta coronavirus variant continues to spread, Portuguese authorities are scrambling to bring a spike in cases under control and said they would accelerate vaccinations and increase testing.

* India’s government is in talks with Pfizer and other vaccine manufacturers to import their COVID-19 vaccines in accordance with local laws, a senior government official said.

* Indonesia passed the mark of 2 million coronavirus cases after a record number of new infections, as authorities announced a tightening of restrictions to contain the spread in the world’s fourth most populous country.

* Hong Kong said it would shorten the quarantine period for vaccinated people arriving in the city to seven days from 14, provided travelers show sufficient antibodies against the novel coronavirus.

* Taiwan welcomed 2.5 million vaccine doses from the United States on Sunday as help from a true friend. China’s foreign ministry urged the United States not to seek “political manipulation” in the name of vaccine assistance.

* Well above 80% of the athletes and officials residing in the Olympic village will be vaccinated when the Games kick off, the International Olympic Committee President said.

* Canada will start cautiously lifting border restrictions for fully vaccinated citizens and other eligible people on July 5 but U.S. and other foreign travelers will still be excluded, the government said.

* U.S. land borders with Canada and Mexico will remain closed to non-essential travel until at least July 21, the U.S. Homeland Security Department said.

* An Israeli health official urged more 12- to 15-year-olds to be vaccinated, citing new outbreaks that he attributed to the Delta variant.

* Qatar will only allow people fully vaccinated to attend next year’s World Cup and is in talks to secure one million doses, the prime minister said.

* GlaxoSmithKline and Vir Biotechnology said final results from a late-stage study of their monoclonal antibody confirmed it significantly reduced hospitalization and death among high-risk COVID-19 patients when given early in the disease.

* Global stocks dropped to a four-week low after last week’s surprise hawkish shift by the U.S. Federal Reserve reduced the allure of riskier assets, while the dollar held gains and stood near a 10-week high.