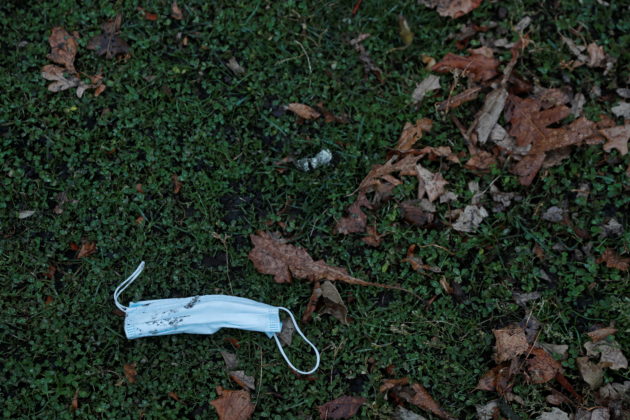 FILE PHOTO: A protective face mask lays, as the global outbreak of the coronavirus disease (COVID-19) continues, beside leaves at the lakefront in Chicago, Illinois, U.S., December 6, 2020. REUTERS/Shannon/File Photo

(Reuters) -At least seven people in five U.S. states were infected with the novel coronavirus weeks before those states reported their first cases, a large new government study showed, pointing to the presence of the virus in the country as early as December 2019.

Participants who reported antibodies against SARS-CoV-2 were likely exposed to the virus at least several weeks before their sample was taken, as the antibodies do not appear until about two weeks after a person has been infected, the researchers said.

The positive samples came from Illinois, Massachusetts, Mississippi, Pennsylvania and Wisconsin and were part of a study of more than 24,000 blood samples taken for a National Institutes of Health research program between Jan. 2 and March 18, 2020.

Of the seven samples, three were from Illinois, where the first confirmed coronavirus case was reported on Jan. 24, while the remaining four states had one case each. Samples from participants in Illinois were collected on Jan. 7 and Massachusetts on Jan. 8.

The data suggests that the coronavirus was circulating in U.S. states far from the initial hotspots and areas that were considered the virus’ points of entry into the country, the study noted.

The data also backs a Centers for Disease Control and Prevention study that suggested the virus may have been circulating in the United States well before the first COVID-19 case was diagnosed on Jan. 19, 2020.

“This study allows us to uncover more information about the beginning of the U.S. epidemic,” said Josh Denny, one of the authors of the study, which was published in the journal Clinical Infectious Diseases.

The United States has so far reported 33.6 million cases, according to a Reuters tally.

The infections were confirmed using two antibody tests, which were granted emergency use authorization by the U.S. Food & Drug Administration.

(Reporting by Mrinalika Roy in Bengaluru; Editing by Anil D’Silva)