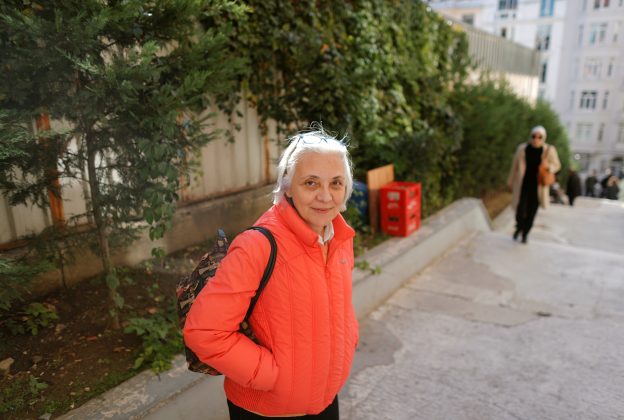 Idil Eser, the director of Amnesty in Turkey, poses during an interview with Reuters in Istanbul, Turkey, October 31, 2017. REUTERS/Osman Orsal

ISTANBUL (Reuters) – Amnesty International’s Turkey director, freed from four months detention but still facing trial on terrorism charges, said the case against her and other human rights activists was “absurd and surreal”.

Idil Eser was one of eight activists freed last week on bail, in a case which has become a flash-point in Turkey’s tense relations with Europe. Their trial has brought condemnation from rights groups and some Western governments concerned by what they see as creeping authoritarianism in the NATO member state.

The activists were detained by police in July as they attended a workshop on digital security and information management on an island near Istanbul.

The charge against them, of aiding a terrorist organization, is similar to those leveled against tens of thousands of Turks detained since a failed military coup by rogue soldiers in July 2016, in which at least 240 people were killed.

“I cannot even find words to describe the absurdity, the surreality of the situation. It’s total nonsense,” Eser said when asked about the charges. She was speaking to Reuters in her first interview since being released.

Turkey rejects foreign criticism of the trials and says its judiciary operates independently of the government.

“Turkey is a state of law and our judges are independent and impartial,” Deputy Prime Minister Bekir Bozdag told reporters earlier this week when asked about the case.

At the time of the activists’ detention, President Tayyip Erdogan said the eight had gathered on the island for a meeting “that might be considered as a follow-up” to last year’s failed coup, which he has cast as part of a foreign-backed plot.

Erdogan was quoted by several Turkish newspapers on Thursday as telling reporters on his plane that the judiciary was acting independently in the case. “We cannot know how the court will rule in the end,” the Hurriyet newspaper quoted him as saying.

The indictment also brought charges against Swedish national Ali Gharavi and Peter Steudtner, a German, prompting an angry response from Berlin, which threatened to put curbs on economic investment in Turkey and said it was reviewing arms projects.

The day after their release last week, Steudtner and Gharavi left Turkey, but the trial continues on Nov. 22. Prosecutors have sought jail sentences of up to 15 years for all of the defendants.

Steudtner and Gharavi told the court during the trial that they were shocked by the allegations against them. They could not immediately be reached for further comment.

Authorities have jailed more than 50,000 people pending trial in a crackdown following the abortive coup. Erdogan says the purges across society are necessary to maintain stability in Turkey, a NATO member state bordering Iran, Iraq and Syria.

European allies fear he is using the investigations to check opposition and undermine the judiciary.

Eser said her time in jail had marked a turning point in her life. Less than a week after her release, the 54-year-old made an appointment at a tattoo parlor in central Istanbul.

“With other defendants, we had decided to go to a Turkish bath when we got out, and the other decision was to get a tattoo,” she said. “So I started right away.”