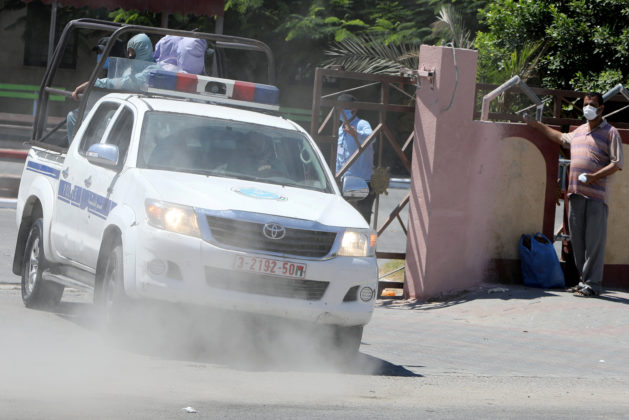 Members of Palestinian security forces wearing protective clothings riding on a truck arrive at a hospital where a 61-year-old man died after contracting the coronavirus disease (COVID-19), in the northern Gaza Strip August 26, 2020. REUTERS/Mohammed Salem

GAZA (Reuters) – Gaza reported one coronavirus death and at least 10 new cases of infection on Wednesday as the blockaded Palestinian enclave sought to control its first public outbreak of the disease.

Hamas-controlled security forces enforced a lockdown in all cities in the coastal territory, warning people to stay at home or to wear face masks if they had to go out for emergencies.

Health officials said the 61-year-old man who died had pre-existing conditions and had been on a respirator.

Ten more cases were reported on Wednesday, six of them in Maghazi refugee camp where the first four infections were discovered on Monday, and another four in Gaza City and the northern area of the enclave of 2 million people.

Until Monday the 360 square-kilometre (139 square-mile) coastal strip had reported no infections outside border quarantine facilities for new arrivals.

Facing for the first time a situation that the rest of the world has been dealing with for months, Gazans have been going online to share experiences and voice their concerns.

“We are now alone with Corona, with the blazing sun and the power supply being cut off. Corona came to empty pockets and homes on the brink of sadness and anger,” wrote one Gaza resident on Twitter.

The 40 kilometre-long territory is sealed off from the outside world by Israeli walls, watchtowers and gunboats along 90% of its border and coastline, and by Egypt along a narrow strip to the south.

Both countries impose tight restrictions on movement in and out of Gaza, citing security concerns over Hamas, which is regarded as a terrorist organization by Israel and the United States.

The blockade is thought to be one reason why Gaza remained relatively virus-free, with many of its residents comparing their situation to a permanent lockdown.

The United Nations agency dealing with Palestinian refugees, UNRWA, said it was considering alternative plans to continue under lockdown the health, education and food services it provides to more than half Gaza’s population.

UNRWA spokesman Adnan Abu Hasna said clinics remained open but staffers were providing medical consultations over the phone, and some medication was being delivered to homes.