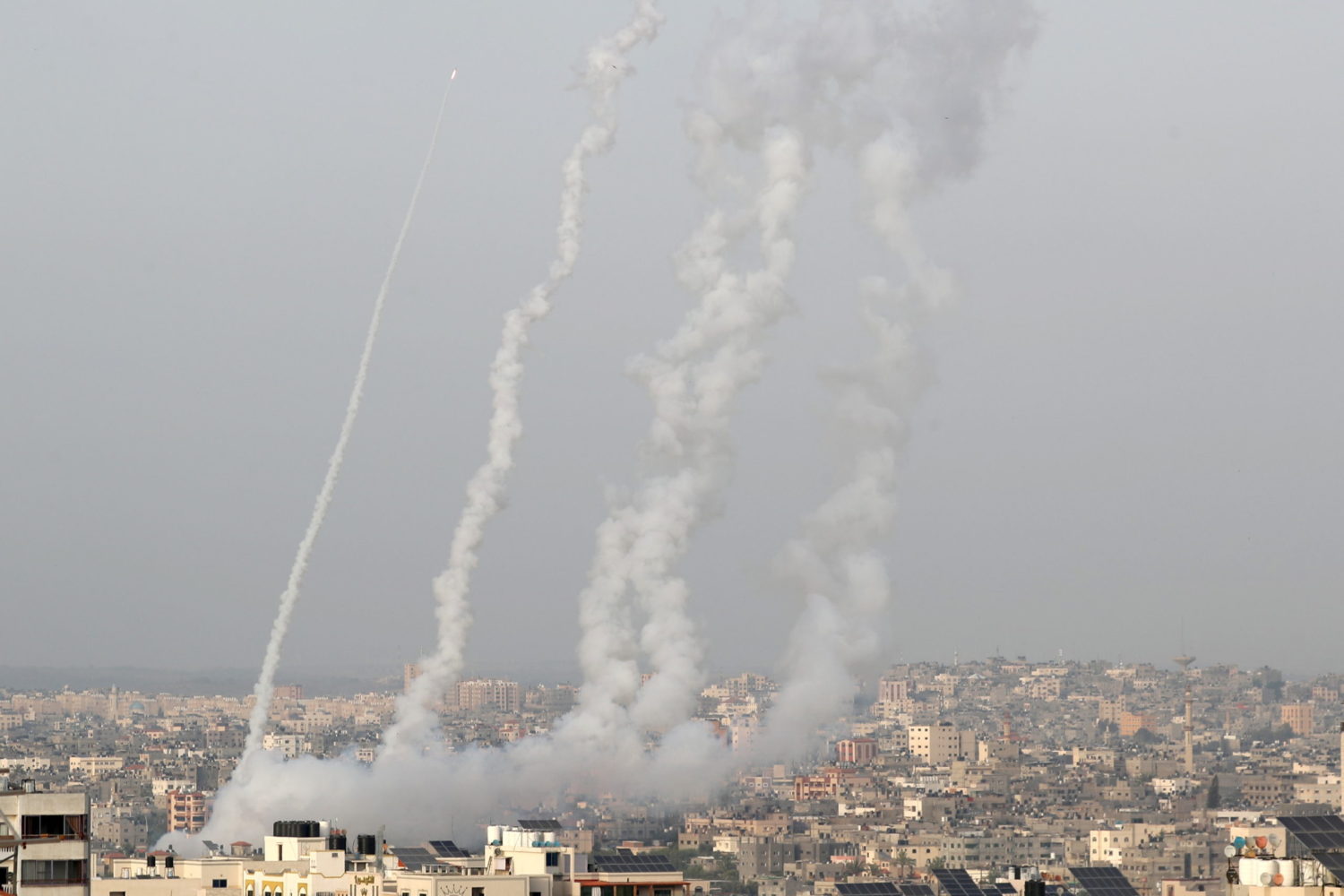 By Jeffrey Heller and Nidal al-Mughrabi

JERUSALEM/GAZA (Reuters) -Palestinian militants in the Gaza Strip fired rockets toward the Jerusalem area and southern Israel on Monday, carrying out a threat to punish Israel for violent confrontations with Palestinians in Jerusalem.

The Gaza health ministry said nine Palestinians were killed in Israeli air strikes in the Palestinian territory after the barrages against Israel. The Israeli military issued no immediate comment on any action it had taken in the enclave.

Rocket sirens sounded in Jerusalem, in nearby towns and in communities near the Gaza minutes after an ultimatum from the enclave’s ruling Islamist Hamas group demanding Israel stand down forces in the al Aqsa mosque compound and another flashpoint in the holy city expired.

There were no immediate reports of casualties from the rocket fire in Israel, but local media reported that a house in the Jerusalem hills had been damaged, in the most serious outbreak of hostilities with Hamas in months.

Along the fortified Gaza-Israeli border, a Palestinian anti-tank missile fired from the tiny coastal territory struck a civilian vehicle, injuring one Israeli, the military said.

“This is a message the enemy should understand well,” said Abu Ubaida, a spokesman for Hamas’s armed wing.

As Israel celebrated “Jerusalem Day” earlier on Monday, marking its capture of eastern sections of the holy city in the 1967 Arab-Israeli war, violence erupted at the al Aqsa mosque, Islam’s third most sacred site.

The Palestinian Red Crescent Society said more than 300 Palestinians were injured in clashes with police who fired rubber bullets, stun grenades and tear gas in the compound, which is also revered by Jews at the site of biblical temples.

The skirmishes, in which police said 21 officers were also hurt, at al Aqsa had died down by the time Hamas issued the 6 p.m. (1500 GMT) ultimatum.

The hostilities caught Israeli Prime Minister Benjamin Netanyahu at an awkward time, as opponents negotiate the formation of a governing coalition to unseat him after an inconclusive March 23 election.

For Hamas, some commentators said, its challenge to Israel was a sign to Palestinians, whose own elections have been postponed by President Mahmoud Abbas, that it was now calling the shots in holding Israel accountable for events in Jerusalem.

Recent clashes in Jerusalem have raised international concern about wider conflict, and the White House called on Israel to ensure calm during “Jerusalem Day.”

The Sheikh Jarrah neighborhood in East Jerusalem has also been a focal point of Palestinian protests during the Muslim holy month of Ramadan.

In an effort to defuse tensions, police changed the route of a traditional Jerusalem Day march, in which thousands of Israeli flag-waving Jewish youth walk through the Old City. They entered through Jaffa Gate, bypassing the Damascus Gate outside the Muslim quarter, which has been a flashpoint in recent weeks.

Police rushed the marchers to cover at Jaffa Gate after the sirens went off.

Israel views all of Jerusalem as its capital, including the eastern part that it annexed after the 1967 war in a move that has not won international recognition. Palestinians want East Jerusalem to be the capital of a state they seek in Gaza and the Israeli-occupied West Bank. 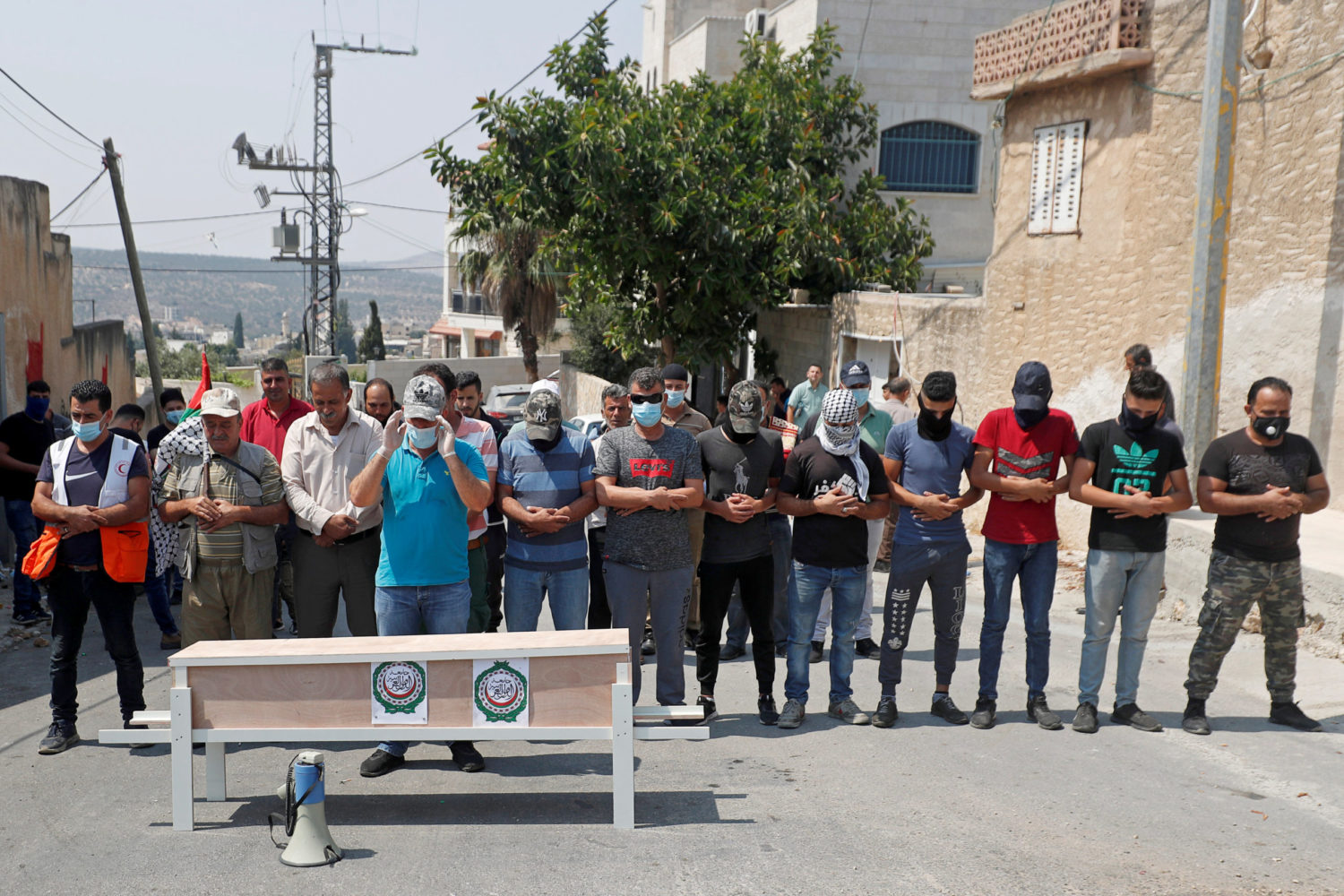 As the United Arab Emirates and Bahrain prepare to sign normalization accords with Israel at a White House ceremony on Tuesday, Palestinian leaders face calls to overhaul their strategy to avoid becoming marginalized in a region where Israel and most Sunni Arab regimes share a fear of Iran.

The Palestinian approach to securing freedom from Israeli occupation has for years relied on a longstanding pan-Arab position that called for Israeli withdrawal from the occupied West Bank and Gaza and Israel’s acceptance of Palestinian statehood, in return for normal relations with Arab countries.

But the Palestinians last week failed to persuade the Arab League to condemn nations breaking ranks.

Shtayyeh said the Palestinians are now discussing whether to “adjust Palestine’s relationship with the Arab League.”

But critics say the proposed move is too little too late, with President Mahmoud Abbas facing mounting criticism for their increasingly isolated position.

“There is very little indication that the (Palestinian) leadership is contemplating a break from its approach,” Tareq Baconi, an analyst with the International Crisis Group, told Reuters.

The Palestinians’ strategy centers on holding Israel to account in international legal tribunals, and trying to break the United States’ dominance over the Israeli-Palestinian peace process, Baconi said.

“Arab and European support in that strategy is crucial, but it is questionable that the Palestinians will be able to secure either to the level required to ensure a just peace.”

Despite signs of shifting Arab support, Saeb Erekat, Secretary General of the Palestine Liberation Organization (PLO), said the underlying Palestinian strategy for achieving a state in the West Bank, East Jerusalem and Gaza would not change.

“To stay on the grounds of international law, international legality, to seek peace based on ending Israeli occupation and a two-state solution … we cannot depart from these squares,” he told Reuters.

While conceding difficulties faced by a Palestinian leadership under Israeli occupation, analysts nevertheless say Abbas does have some options.

After years of in-fighting between the two main Palestinian factions, Abbas’s Fatah and Islamist Hamas, long-overdue elections would refresh the president and parliament’s mandate and boost their leverage abroad by increasing their legitimacy at home, analysts say.

“We need to … rebuild the PLO’s institutions from the ground up and cement relations between Palestinians here and in the diaspora,” Gaza analyst Talal Okal said.

Over six million diaspora Palestinians, he said, “can influence the communities they live in so the Palestinian cause has a place on the agendas of their host governments.”

One area where Abbas has widespread public support – 70% in recent polls – is his two-year boycott of the Trump administration, which he accuses of pro-Israel bias over its recognition of Jerusalem as Israel’s capital and endorsement of Israel’s West Bank settlements.

Frustrated by the Palestinians’ refusal to take part in Trump-led talks, the White House has sought to bypass Abbas and his team, apparently hoping they will see the deals with the UAE and Bahrain as incentives to return to negotiations.

For more than two years Trump’s son-in-law Jared Kushner has tried sidestepping Abbas to appeal to Palestinians directly, telling Al-Quds newspaper in 2018: “The world has moved forward while you have been left behind. Don’t allow your grandfather’s conflict to determine your children’s future.”

That has had little apparent success. And the Palestinian leadership at first engaged with the Trump administration. Until, said Erekat, they concluded that “these people want to dictate a solution, not negotiate a solution … they’re the ones who are departing from international law.”

Dennis Ross, who served as a Middle East adviser under Republican and Democratic administrations, had cautionary words for both sides.

While the Gulf deals served notice that Palestinians “don’t have a veto on normalization as regional dynamics shift” the Israelis, he said, “cannot wish the Palestinians away — and standing pat also means increasing the risk of one state for two peoples.” 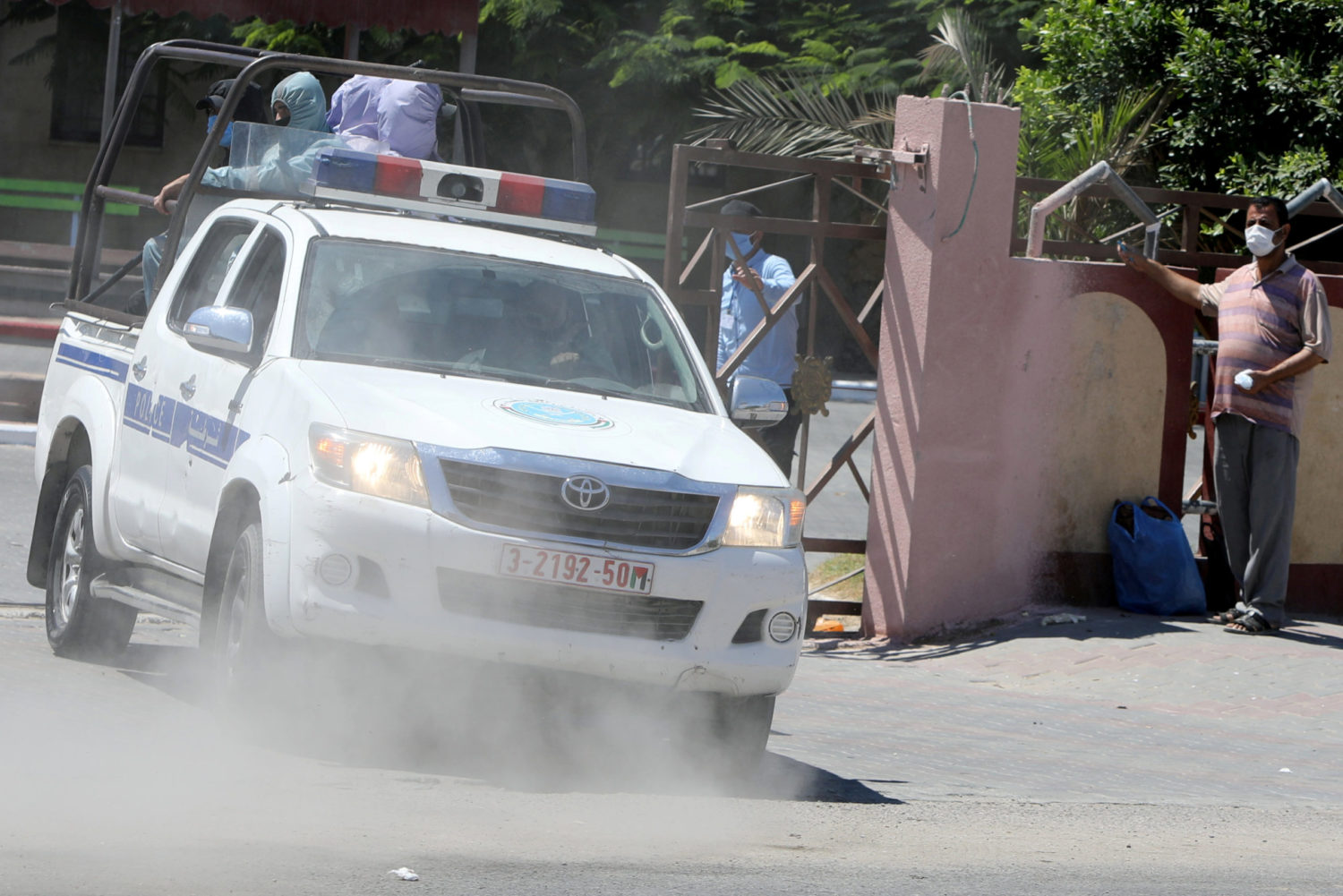 GAZA (Reuters) – Gaza reported one coronavirus death and at least 10 new cases of infection on Wednesday as the blockaded Palestinian enclave sought to control its first public outbreak of the disease.

Hamas-controlled security forces enforced a lockdown in all cities in the coastal territory, warning people to stay at home or to wear face masks if they had to go out for emergencies.

Health officials said the 61-year-old man who died had pre-existing conditions and had been on a respirator.

Ten more cases were reported on Wednesday, six of them in Maghazi refugee camp where the first four infections were discovered on Monday, and another four in Gaza City and the northern area of the enclave of 2 million people.

Until Monday the 360 square-kilometre (139 square-mile) coastal strip had reported no infections outside border quarantine facilities for new arrivals.

Facing for the first time a situation that the rest of the world has been dealing with for months, Gazans have been going online to share experiences and voice their concerns.

“We are now alone with Corona, with the blazing sun and the power supply being cut off. Corona came to empty pockets and homes on the brink of sadness and anger,” wrote one Gaza resident on Twitter.

The 40 kilometre-long territory is sealed off from the outside world by Israeli walls, watchtowers and gunboats along 90% of its border and coastline, and by Egypt along a narrow strip to the south.

Both countries impose tight restrictions on movement in and out of Gaza, citing security concerns over Hamas, which is regarded as a terrorist organization by Israel and the United States.

The blockade is thought to be one reason why Gaza remained relatively virus-free, with many of its residents comparing their situation to a permanent lockdown.

The United Nations agency dealing with Palestinian refugees, UNRWA, said it was considering alternative plans to continue under lockdown the health, education and food services it provides to more than half Gaza’s population.

UNRWA spokesman Adnan Abu Hasna said clinics remained open but staffers were providing medical consultations over the phone, and some medication was being delivered to homes.