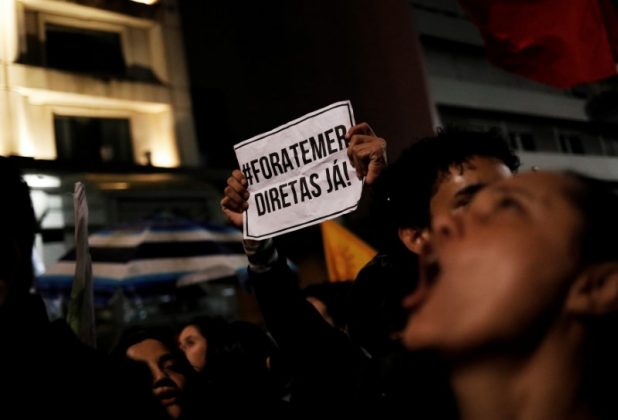 Demonstrators shout slogans during a protest against Brazil's President Michel Temer in Sao Paulo, Brazil, May 18, 2017. The sign reads "Out Temer and Elections now!." REUTERS/Nacho Doce

BRASILIA (Reuters) – Hopes Latin America’s largest economy could emerge from its worst-ever recession this year were plunged into doubt on Thursday after President Michel Temer was shaken by allegations he condoned bribing a potential witness.

Fears the scandal could force Temer to step down or derail his ambitious reform agenda drove the biggest daily drop in the Brazilian real since 1999, while the benchmark Bovespa stock index closed 9 percent lower.

Government officials, lawmakers and economists told Reuters the crisis surrounding Temer, 76, could slow the pace of interest rate cuts and diminish consumer and business confidence enough to extend the recession into a third year.

Central Bank data this week suggested Brazil’s economy finally grew in the first three months of the year after eight consecutive quarters of contraction. A second month of job growth in April also fueled hopes of a recovery.

“The government went from its best moment to its worst moment in a matter of seconds,” said a Temer aide, who asked for anonymity to speak freely. “Even the opposition was betting on the approval of the reforms. Now we need to reestablish normalcy.”

Since he took office following the impeachment of leftist President Dilma Rousseff a year ago, Temer has regained investors’ confidence with measures to stop hemorrhaging in public finances. The government recorded a budget deficit of more than 10 percent of gross domestic product last year.

In a defiant address to the nation, Temer insisted that he would not resign and his ministers tried to ease market alarm by promising to push ahead with reforms.

Still, the specter of renewed political uncertainty raised doubts about the recovery and senior politicians said they could not press on with reforms in the midst of calls for Temer to step down.

Senator Ricardo Ferraço, a Temer ally in charge of drafting the government’s labor reform, said he had halted his work until the political crisis was resolved.

The lawmaker sponsoring the government’s flagship pension reform, Arthur Maia, also said there was no room to advance on the legislation in the midst of the turmoil created by the allegations against Temer.

“This certainly makes approval of the reforms more difficult,” Senator Valdir Raupp, a close ally to Temer, told Reuters. “Halting legislative work is the worst path to take. We have to see how things evolve in coming days.”

Government officials also said they worry the crisis could hamper investors’ interest in multi-million dollars auctions of oil rights, hydroelectric plants and infrastructure projects later this year. Temer was betting on those investments to add momentum to the recovery

Risks that labor and pension reforms could stall will likely prompt the central bank to slow the pace of interest rate cuts, limiting a source of relief for businesses battered by the recession, economists said.

The sharp depreciation of Brazil’s real could raise inflation expectations and cut short the easing cycle, economists said. The real closed down nearly 8 percent at 3.38 per US dollar.

“Although there is still room to cut rates, the central bank will be more cautious on the pace of easing,” said Alessandra Ribeiro, partner with consultancy Tendencias.

“The scandal compromises the recovery, which could be much weaker than originally expected or even fizzle away.”

Earlier this week, many market economists expected a more aggressive 125-basis-point rate cut at the bank’s next meeting on May 31. Investment banks expected the bank’s benchmark Selic rate to drop below 8 percent this year.

A surge in Brazilian interest rate futures shows traders are scaling back their bets for steeper rate cuts.

“The chaos in the markets should serve as a warning for Congress to continue with the reforms,” Martins said. “Paralysis will send a terrible message to everyone.”