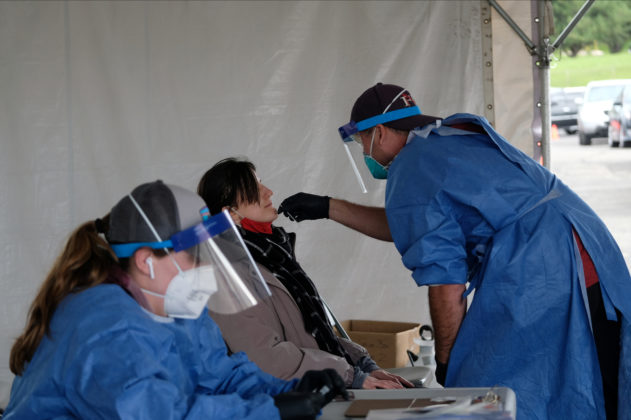 By Lisa Shumaker and Maria Caspani

CHICAGO (Reuters) – Wisconsin and other states in the U.S. Midwest are battling a surge in COVID-19 cases, with new infections and hospitalizations rising to record levels in an ominous sign of a nationwide resurgence as temperatures get colder.

More than 22,000 new cases of the novel coronavirus were reported on Wednesday across the Midwest, compared with a previous record of more than 20,000 on Oct. 9. Hospitalizations in those states reached a record high for a 10th day in a row as some hospitals began feeling the strain.

More than 86% of the beds in Wisconsin’s intensive care units were in use as of Wednesday, and a field hospital opened in a Milwaukee suburb in case medical facilities become overwhelmed.

Neat rows of makeshift cubicles enclosing beds and medical supplies occupied the fairgrounds in West Allis, which has been the home of the Wisconsin State Fair since the late 1800s.

Dr. Paul Casey, the medical director of the emergency department at Bellin Hospital in Green Bay, Wisconsin said entire wards full of COVID-19 patients were stretching resources “to the limit.”

“It’s going to get worse,” he told CNN on Thursday. “We predict it will peak mid-Novemeber.”

More than 1,000 people were hospitalized for COVID-19 in Wisconsin on Wednesday, the state’s health department said, and health authorities recorded an almost 25% spike in coronavirus hospitalizations in the past seven days compared to the previous week.

Since the start of October, North Dakota and South Dakota have reported more new COVID-19 cases per capita than all but one country in the world, Andorra.

These states are reporting three times as many new cases per capita this month than the United Kingdom, Spain or France, according to a Reuters analysis.

“It’s quite concerning,” Dr. Anthony Fauci, the nation’s top infectious disease expert, said in an interview with ABC television on Thursday. “We really got to double down on the fundamental public health measures that we talk about every single day because they can make a difference.”

Fauci also warned about the risks of holding crowded rallies as President Donald Trump returned to the campaign trail after recovering from the coronavirus.

Trump, making a push in the weeks before the Nov. 3 presidential election after being hospitalized with COVID-19, has continued to minimize the threat to public health posed by the virus that has killed more than 216,000 Americans.

New York, once the U.S. epicenter of the virus, is now dealing with a spike in infections in several “clusters.” Governor Andrew Cuomo said he expected flare-ups to continue for at least a year.

“The way of the world going forward is going to be that the virus will constantly flare up in certain locations,” Cuomo told reporters on Wednesday. “The art form is going to be identify these small sites where it flares up and be able to stop it before it spreads.”