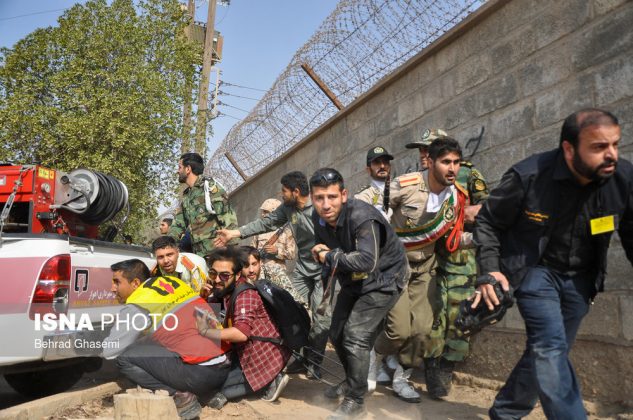 A general view shows an attack on a military parade in Ahvaz, Iran, in this September 22, 2018 photo by ISNA. The photo is watermarked from source. ISNA/Iranian Students' News Agency/Social Media/via REUTERS ATTENTION EDITORS - THIS PICTURE WAS PROVIDED BY A THIRD PARTY. NO RESALES. NO ARCHIVE. MANDATORY CREDIT.

LONDON (Reuters) – Iranian supreme leader Ayatollah Ali Khamenei said on Monday that the attackers who killed 25 people at a military parade were paid by Saudi Arabia and the United Arab Emirates, and that Iran would “severely punish” those behind the bloodshed.

The deputy head of Iran’s Revolutionary Guards also accused the United States and Israeli of involvement in the attack and he said they should expect a devastating response from Tehran.

In the southwestern Iranian city of Ahvaz, thousands packed the streets to mourn the victims of Saturday’s assault, many chanting “Death to Israel and America”. Twelve members of the elite Islamic Revolutionary Guard Corps were among the 25 dead.

The coffins, wrapped in the flag of the Islamic Republic, were carried by the mourners. Many held pictures of a four-year old boy killed in the incident, one of the worst such attacks against Iran’s the most powerful military force.

Four assailants fired on a viewing stand in Ahvaz where Iranian officials had gathered to watch an annual parade marking the start of Iran’s 1980-88 war with Iraq.

“Based on reports, this cowardly act was done by people who the Americans come to help when they are trapped in Syria and Iraq, and are paid by Saudi Arabia and the UAE,” Khamenei said on his official website.

Guards Brigadier General Hossein Salami, in a speech broadcast on state TV, said: “You have seen our revenge before. You will see that our response will be crushing and devastating and you will regret what you have done,”

Tasnim new agency also quoted Salami as saying that the “horrific crime” exposed the dark side of an alliance that the United States, Saudi Arabia and Israel had created to counter Iranian influence in the region.

The secretary of Iran’s National Security Council said Tehran needed to talk to its neighbors to avoid tensions.

“It’s essential to be fully aware and increase our constructive dialogues to neutralize the plots of enemies who want to create suspicion and disagreement among regional countries,” Ali Shamkhani said.

He also criticized the United States, saying U.S. sanctions against Iran were illegal and that President Donald Trump was using them as a tool for “personal revenge”.

The United Arab Emirates, a close ally of Saudi Arabia and Washington, rejected Iran’s allegations alluding to its involvement in the violence.

U.S. Secretary of State Mike Pompeo, asked by a Fox News interviewer if the United States played any role in the attack, said: “When you have a security incident at home, blaming others is an enormous mistake.”

The loss of innocent lives was tragic, Pompeo added. There has been no reaction yet from Saudi Arabia or Israel.

Accusations against Gulf countries will almost certainly antagonize Iran’s regional foe Saudi Arabia. The oil super-powers are waging a war for influence across the Middle East, backing opposite sides in Syria, Yemen, Iraq and Lebanon.

It is, however, highly unlikely the Guards will strike any of its foes directly and risk sparking a regional conflict.

Analyst said the violence has led to a boost in domestic support for the Guards which they could use to silence their critics, who include pragmatic President Hassan Rouhani.

Rouhani engineered Iran’s 2015 nuclear deal with world powers that ushered in a cautious detente with Washington before tensions flared anew with Trump’s decision in May to pull out of the accord and reimpose sanctions on Tehran.

Iran’s Intelligence Minister, Mahmoud Alavi, said a network of suspects had already been arrested in connection with the attack, the judiciary’s news agency Mizan reported. He did not elaborate..

The Guard Corps was set up after the 1979 Islamic revolution to protect the Shi’ite clerical ruling system and revolutionary values. It answers to Ayatollah Khamenei and has an estimated 125,000-strong military with army, navy and air units.