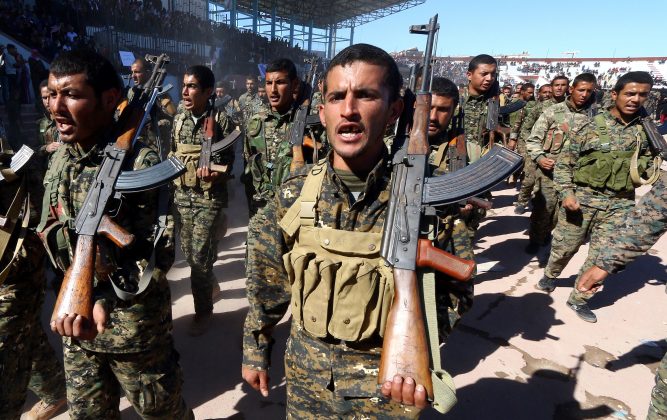 QAMISHLI, Syria (Reuters) – Islamic State fighters in eastern Syria are pinned down in a final tiny pocket with their wives and children, forcing a U.S.-backed militia to slow its advance to protect civilians, the militia said on Tuesday.

An aid agency said separately that 10,000 civilians had fled the enclave since last week and were arriving hungry and desperate at a camp.

The Kurdish-led Syrian Democratic Forces, which have been backed by 2,000 U.S. troops and air support, are preparing for a final showdown with Islamic State in eastern Syria after helping to drive the fighters from the towns and cities that once formed the group’s self-proclaimed caliphate.

SDF spokesman Mustafa Bali said Islamic State fighters were now confined to a pocket of just 5-6 square km (around 2 square miles) by the Euphrates River. The presence of their wives and children meant the U.S.-backed militia could not launch an all-out storm of it, and was using slower, more precise tactics instead.

“There are thousands of Daesh families there. They are civilians at the end of the day,” Bali told Reuters, using an acronym for Islamic State. “We cannot storm the area or put any child’s life in danger.”

The SDF had refused an offer from the jihadists via mediators to surrender the territory in return for safe passage out, Bali said.

Clashes had slowed because of the presence of the civilians, and “precise operations” were taking more time. “Calm prevails on the frontlines but there’s a state of caution and waiting.”

The International Rescue Committee (IRC) charity said it was helping tend to a sudden influx of more than 10,000 people, almost all women, children and elderly, who had arrived at a camp in northeast Syria since last week.

Most were exhausted, extremely hungry, and thirsty as they fled Islamic State territory, the global aid agency said. Many arrived barefoot. The United Nations confirmed that 12 young children had died after reaching the al-Hol camp or on the dangerous journey there, the IRC added on Tuesday.

The SDF, spearheaded by the Kurdish YPG militia, has seized much of north and east Syria with U.S. help. It has been battling Islamic State remnants near the Iraqi border for months.

Last month, U.S. President Donald Trump declared that Islamic State had been defeated and announced the abrupt withdrawal of the U.S. troops, over objections of top advisors including Defense Secretary Jim Mattis who quit in protest.

The SDF vowed to escalate its operations against Islamic State this month after a bomb attack killed several people including two U.S. soldiers in northern Syria. SDF officials have warned of an Islamic State revival if Washington withdraws.

Kurdish leaders also fear a U.S. pullout would give Turkey, which sees the YPG as a threat on its border, the chance to mount a new assault. Washington has since said it will make sure its allies are protected when it leaves.

(Reporting by Rodi Said in Syria and Ellen Francis in Beirut; Editing by Peter Graff)