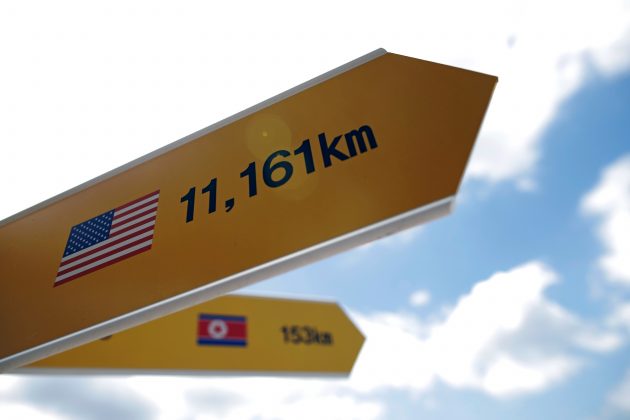 GENEVA (Reuters) – North Korea said on Tuesday that relations with the United States will develop “wonderfully at a fast pace” if Washington responds to its efforts on denuclearization with trustworthy measures and practical actions.

North Korea’s ambassador to the United Nations in Geneva, Han Tae Song, told the U.N.-sponsored Conference on Disarmament that Pyongyang would continue working to establish a “permanent and durable peace mechanism on the Korean peninsula”.

The landmark summit between North Korean leader Kim Jong Un and U.S. President Donald Trump last June produced a promise to work toward the complete denuclearization of the divided peninsula. Progress since then has been patchy.

Washington is demanding concrete action, such as a full disclosure of North Korea’s nuclear and missile facilities, before agreeing to key goals of Pyongyang – easing international sanctions and declaring an official end to the 1950-53 Korean War that ended with an armistice.

The summit had brought about a dramatic turn in relations that had been “the most hostile on earth” and contributed to ensuring peace and security on the peninsula, Han said..

He referred to the two leaders’ joint statement issued after their meeting in Singapore and Kim’s New Year’s Address, adding:

“Accordingly we declared that we would neither make and test nuclear weapons any longer nor use and proliferate them and we have taken various practical measures.

“If the U.S. responds to our efforts with trustworthy measures and corresponding practical actions, bilateral relations will develop wonderfully at a fast pace through the process of taking more definite and epoch-making steps,” he said.

Han told Reuters that he had no information on a possible second summit between Kim and Trump, which the White House has said would be held in late February without saying where.

“As we open a new year, we are determined to seize this hard-won unprecedented window of opportunity of diplomacy,” South Korea’s deputy ambassador Lee Jang-Keun told the Geneva forum on Tuesday.

“The recent announcement by the U.S. of holding a second U.S.-DPRK summit meeting in late February is another harbinger of hope,” he said.

South Korea’s foreign minister Kang Kyung-wha told Reuters at Davos last week that North Korea must make concrete pledges toward curbing its nuclear weapons program, such as dismantling its main nuclear complex and allowing international inspections to confirm the process, when leader Kim meets Trump as soon as next month.