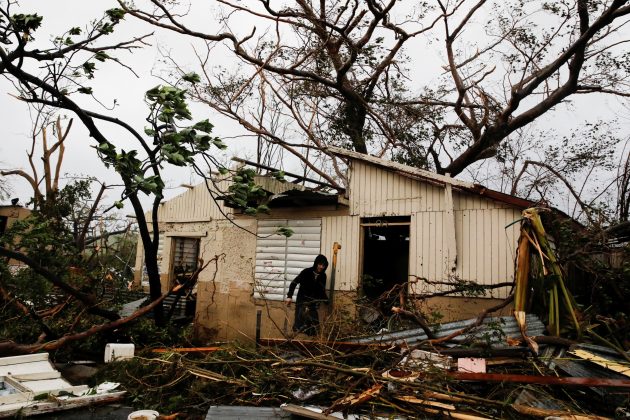 A man looks for valuables in the damaged house of a relative after the area was hit by Hurricane Maria in Guayama, Puerto Rico September 20, 2017. REUTERS/Carlos Garcia Rawlins

SAN JUAN, Puerto Rico (Reuters) – Hurricane Maria lashed parts of the Dominican Republic with heavy rain and high winds and headed northwest in the Caribbean on Thursday after making a direct hit on Puerto Rico that caused severe flooding and cut power to the entire island.

Maria has killed at least 10 people as it raged through the Caribbean, the second major hurricane to do so this month.

Maria was carrying sustained winds of up to 115 miles per hour (185 km per hour) as it moved away from the Dominican Republic on a track that would take it near the Turks and Caicos Islands and the southeastern Bahamas on Thursday night and Friday, the U.S. National Hurricane Canter said in an 8 a.m. ET (1200 GMT) advisory.

Maria was ranked a Category 4 storm, near the top of the five-step Saffir-Simpson scale, with winds of up to 155 mph (250 kph), when it made landfall on Puerto Rico on Wednesday as the strongest storm to hit the U.S. territory in nearly 90 years.

It ripped apart homes, snapped power lines and turned roads into raging debris-laden rivers as it cut across the island of 3.4 million people. 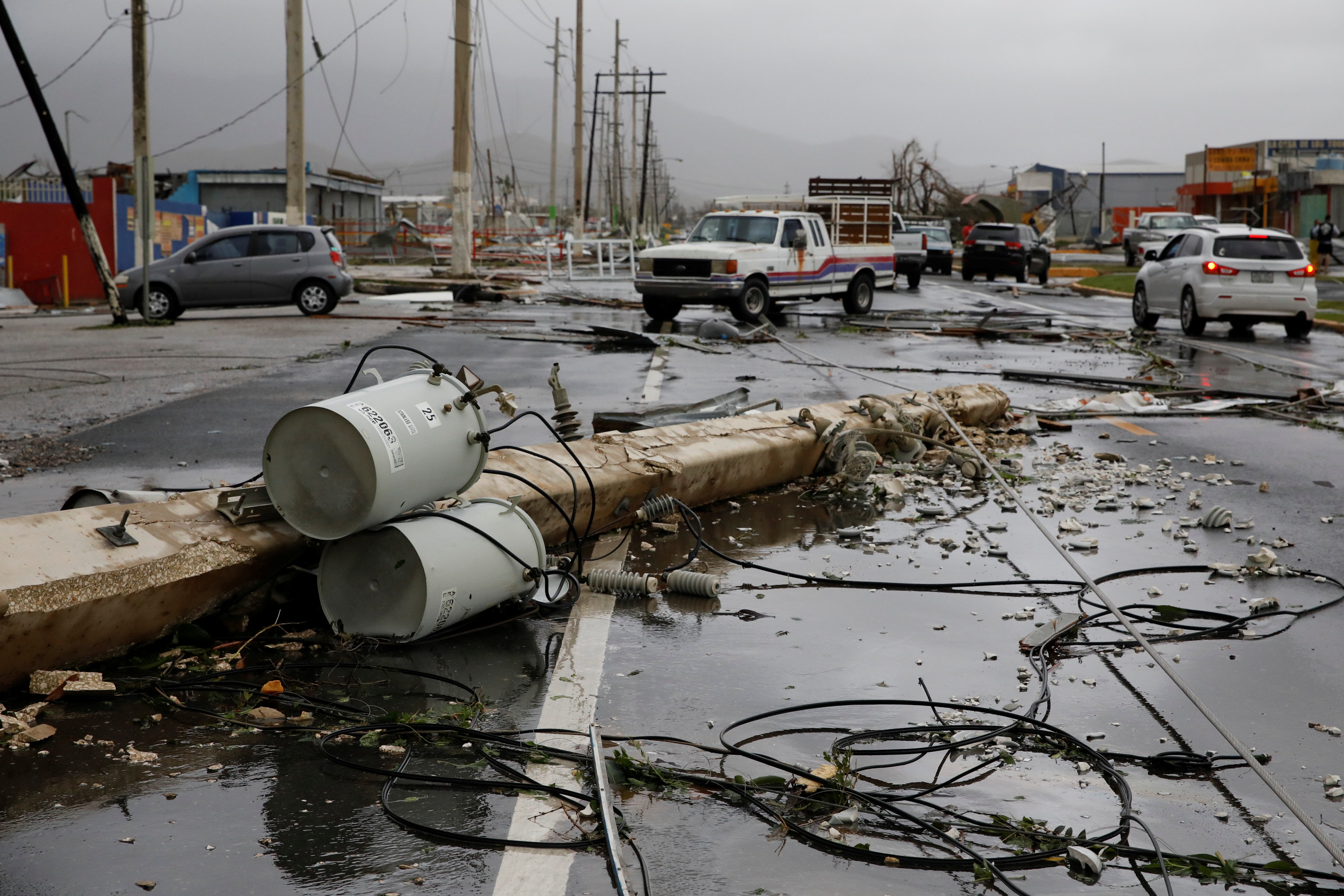 In Old San Juan, Plaza de Colon, one of the grand squares adorning the colonial heart of the capital, was choked with broken branches and trees felled by the storm. Pigeons paced the square looking for scraps, their plumage threadbare.

Aiden Short, 28, a debris management worker from London, said he had headed to the British Virgin Islands to help clean up the devastation of Hurricane Irma when Maria trapped him in San Juan.

“I was supposed to have come as a professional, but now I’ve just had to weather the storm,” Short said. “But now it looks like I might be useful here.”

All of Puerto Rico was under a flash flood warning early on Thursday as the tail end of the storm could bring another 4 to 8 inches (10-20 cm) of rain on Thursday, bringing the storm’s total to 35 inches (89 cm) in parts of the island, the NHC said.

Puerto Rico Governor Ricardo Rossello said there was one death reported so far, a man struck by a piece of lumber hurled by high winds.

“It’s nothing short of a major disaster,” he said in a CNN interview, adding it might take months for the island’s electricity to be completely restored. He imposed a dusk-to-dawn curfew that runs through Saturday. 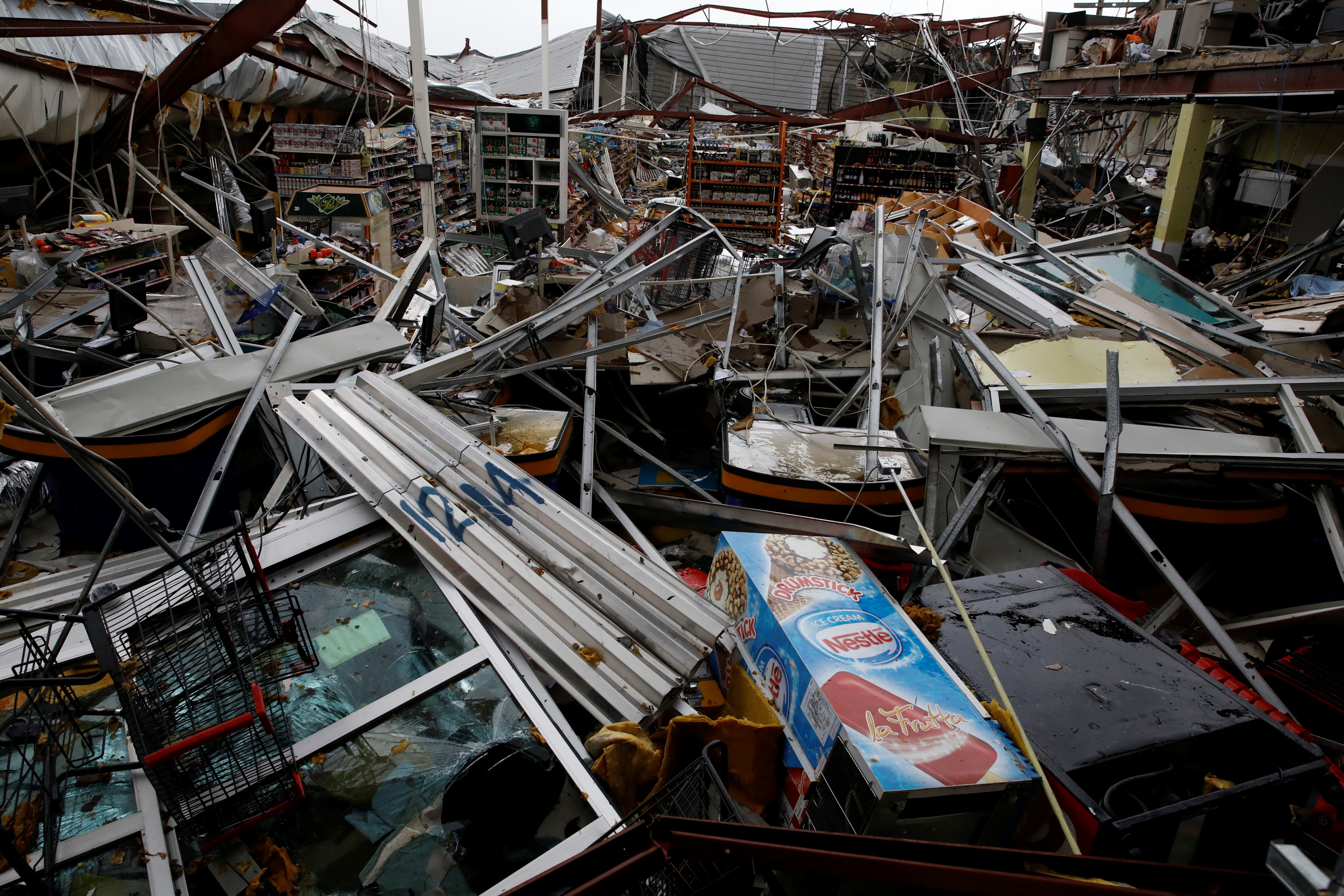 Damages are seen in a supermarket after the area was hit by Hurricane Maria in Guayama, Puerto Rico September 20, 2017. REUTERS/Carlos Garcia Rawlins

The government did not yet have an estimate of how many homes and businesses were destroyed by the storm. But authorities expected to see more people go to shelters on Thursday as they realized how badly their homes were hit, said Pedro Cerame, a spokesman for Rossello.

Thousands went to government shelters during the storm.

The island’s recovery could be complicated by its financial woes as it faces the largest municipal debt crisis in U.S. history. Both its government and the public utility have filed for bankruptcy protection amid disputes with creditors.

Maria was about 95 miles (150 kms) north of Punta Cana, on the east coast of the Dominican Republic on Thursday morning, the NHC said.

Punta Cana, a popular tourist area, was hit with wind gusts of 58 mph (93 kph) and Maria was forecast to bring storm surges, when hurricanes push ocean water dangerously over normal levels, of up to 6 feet (1.83 m) in the Dominican Republic, it said.

Maria was forecast to move north in the Atlantic Ocean over the weekend. It currently looked unlikely to hit the continental United States.

It was a rare Category 5 storm when it struck Dominica on Monday night, damaging about 95 percent of the roofs on the island of 73,000 people, one of the poorest in the Caribbean, the U.N. Office for the Coordination of Humanitarian Affairs said.

The U.S. and British Virgin Islands were also hit this month by Hurricane Irma, which ranked as one of the most powerful Atlantic storms on record. It left a trail of destruction in several Caribbean islands and Florida, killing at least 84 people.