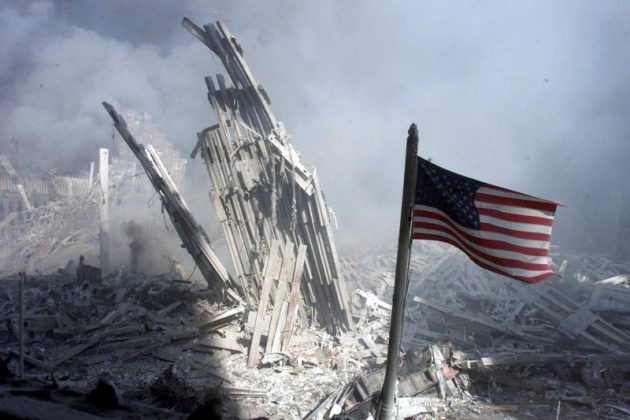 An American flag flies near the base of the destroyed World Trade Center after planes crashed into each of the two towers, causing them to collapse in New York, U.S. on September 11, 2001. REUTERS/Peter Morgan/File Photo

“If you want to know the future you must know the Word of the Living God.”       Jim Bakker

In every moment, the events that Jesus spoke of are evident all around us.  In the vastness of this world, it is sometimes difficult to see the big picture of what is happening NOW!  We must keep our eyes and ears open.

Matthew 24:6-8 (MEV) You will hear of wars and rumors of wars. See that you are not troubled. For all these things must happen, but the end is not yet. 7 For nation will rise against nation, and kingdom against kingdom. There will be famines, epidemics, and earthquakes in various places. 8 All these are the beginning of sorrows.

NATION WILL RISE AGAINST NATION, KINGDOM AGAINST KINGDOM –FROM GLOBAL CONFLICT TRACKER –   Total of 25 conflicts in the world.  Below are listed most significant to U.S. and linked to the history of each conflict

War against Taliban in Afghanistan

Tensions in the East China Sea

War Against Islamic State in Iraq

Conflict between India and Pakistan

This is an increase of 11 million people – an 11 percent rise in the last year – in the number of food-insecure people needing urgent humanitarian action across the world.

Last year’s Global Report on Food Crises identified 108 million people in Crisis food security or worse across 48 countries. The rise in numbers are attributed to increasing instability and conflict as well as drought and very poor harvests. Some countries are suffering from economic conditions that contribute to the malnutrition of their people. The country of Venezuela is now suffering from  lack of food sources or money to purchase necessary food and medicine. Thousands are fleeing to neighboring countries to feed their families.

Approx. 21,000 people die each day, one every four seconds, of malnutrition

Forty percent of preschool-age children who suffer from malnutrition are estimated to be anemic because of iron deficiency, and anemia causes 20 percent of all maternal deaths. In addition, it is estimated that 250 to 500 thousand children go blind from Vitamin A deficiency every year.

FLU – As of the end of February 2018 4,000 people a week in the U.S. were dying of Flu and Pneumonia according to U.S. Center for Disease Control

The levels of influenza-like illnesses being reported for the 2017-2018 flu season are as high as the peak of the swine flu epidemic in 2009, and exceed the last severe seasonal flu outbreak in 2003 when a new strain started circulating, said Anne Schuchat, the U.S. Centers for Disease Control and Prevention’s acting director. Swine flu, which swept the globe in 2009 and 2010, sickened 60.8 million Americans, hospitalized 274,304 and killed 12,469, according to CDC data. Deaths from the current outbreak will likely far outstrip those of the 2009-2010 season.  It is April and the Flu season continues.

AIDS –AIDS is now second only to the Black Death as the largest epidemic in history. (From the World Health Organization) Aids or HIV was originated with non human primates (monkeys) in Central and West Africa

AIDS kills roughly 1.5 million people a year, or about one person every 20 seconds.

MALARIA  –Approximately a half million people die from malaria each year and many millions more are seriously weakened by it. Malaria is spread by mosquitoes.

CHOLERA – Between 42,000 and 142,000 people die of cholera each year.  You can get cholera by eating or drinking contaminated water or food.

LASSA FEVER– Lassa fever, a viral hemorrhagic fever with symptoms similar to those of Ebola virus disease.  This disease is spread through contact with Rat feces and urine. Originated in West Africa. This year has generated more severe and fatal cases.  Usually an estimated 300,000 people are infected with the virus annually, with up to 5,000 deaths. But this year the fatality rate has gone to 50% of those infected.

AND EARTHQUAKES IN VARIOUS PLACES

Currently there are 33 erupting volcanoes and 55 that are having minor activity or have an impending warning issued.