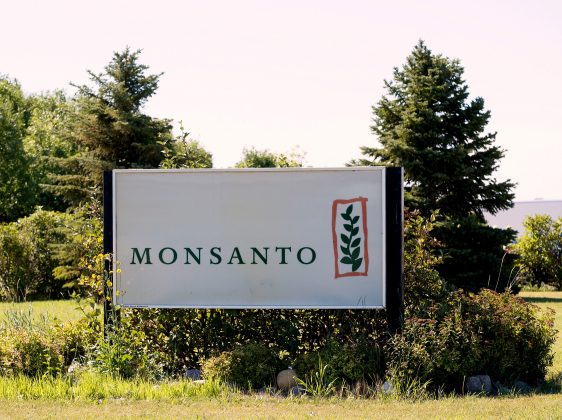 Monsanto is banking on weed killers using a chemical known as dicamba – and seeds engineered to resist it – to dominate soybean production in the United States, the world’s second-largest exporter.

The United States has faced a weed-killer crisis this year caused by the new formulations of dicamba-based herbicides, which farmers and weed experts say have harmed crops because they evaporate and drift away from where they are applied.

Monsanto and BASF say the herbicides are safe when properly applied. They need to convince regulators after the flood of complaints to state agriculture departments.

The U.S. Environmental Protection Agency (EPA) last year approved use of the weed killers on dicamba-resistant crops during the summer growing season. Previously, farmers used dicamba to kill weeds before they planted seeds, and not while the crops were growing.

However, the EPA approved such use only until Nov. 9, 2018, because “extraordinary precautions” are needed to prevent dicamba products from tainting vulnerable crops, a spokesman told Reuters in a statement last week. The agency wanted to be able to step in if there were problems, he said.

Next year, the EPA will determine whether to extend its approval by reviewing damage complaints and consulting with state and industry experts. States are separately considering new restrictions on usage for 2018.

Major soybean-growing states, including Arkansas, Missouri and Illinois, each received roughly four years’ worth of complaints about possible pesticide damage to crops this year due to dicamba use, state regulators said.

Now agriculture officials face long backlogs of cases to investigate, which are driving up costs for lab tests and overtime. Several states had to reassign employees to handle the load.

“We don’t have the staff to be able to handle 400 investigations in a year plus do all the other required work,” said Paul Bailey, director of the Plant Industries division of the Missouri Department of Agriculture.

In Missouri, farmers filed about 310 complaints over suspected dicamba damage, on top of the roughly 80 complaints about pesticides the state receives in a typical year, he said.

Nationwide, states launched 2,708 investigations into dicamba-related plant injury by Oct. 15, according to data compiled by the University of Missouri.

States investigate such complaints to determine whether applicators followed the rules for using chemicals. Those found to have violated regulations can be fined.

Monsanto has said that U.S. farmers spraying this past summer failed to follow detailed instructions of up to 4,550 words printed on labels.

The companies will change usage instructions in hopes of avoiding a repeat of the past summer’s problems.

“With significant adoption and a lot of interest in this new technology, we recognize that many states have received a number of reports of potential off-target application of dicamba in 2017,” Monsanto spokeswoman Charla Lord said last month.

State investigators try to visit fields within days after farmers report possible damage to take photos before signs of injury, such as cupped leaves on soybean plants hit by dicamba, disappear. They question farmers and the people who applied the herbicide, and often gather samples from plants to test.

In Arkansas, farmers filed about 985 complaints associated with dicamba, the most of any state. Investigators are probing about 1,200 total complaints involving pesticide use, which includes weed killers, said Terry Walker, director of the Arkansas State Plant Board.

Arkansas delayed inspections of animal feed and allowed overtime to handle the dicamba cases, which is not normal practice, Walker said. He was unable to provide a cost estimate for dealing with the complaints.

Among the farmers who reported damage was Reed Storey, who said he wanted to ensure state officials knew dicamba caused damage even when users follow the instructions.

“I’m calling strictly to let y’all know that we have an issue with this product,” Storey, who spoke last month, said he told Arkansas regulators.

Illinois received about 421 total pesticide complaints, the most since at least 1989, said Warren Goetsch, acting chief of the Bureau of Environmental Programs at the Illinois Department of Agriculture. That includes at least 245 complaints associated with dicamba, which could take until next year to finish investigating, he said.

“It’s frustrating I think for us that we’re as behind as we are,” Goetsch said.

Monsanto is betting on dicamba-tolerant soybeans to replace those that withstand glyphosate, an herbicide used for decades but which is becoming less effective as weeds develop resistance. The company aims for its dicamba-resistant seeds to account for half the U.S. soybeans planted by 2019.

Monsanto, which is in the process of being acquired by Bayer AG  for $63.5 billion, said it plans to open a call center to help customers use dicamba next year and is talking with states about the product.

Monsanto’s net sales increased $1.1 billion, or 8 percent, in fiscal year 2017 due partly to increased sales of its dicamba-resistant soybean seeds.

The company and BASF already face several lawsuits from farmers alleging damage to plants from dicamba used by neighbors.

The EPA provides grants to states that help fund investigations into pesticide damage and this year offered 35 states extra assistance analyzing plant samples for dicamba, according to the agency.

Minnesota and Illinois turned to the EPA for help, with the latter saying the federal agency has better equipment to detect low levels of dicamba.

In Iowa, the state’s laboratory bureau received 515 samples to test this year, up 35 percent, as dicamba use helped drive up the total number of pesticide complaints to 270 from a typical range of 70 to 120, according to the state. Each test costs up to $9.

“We are really anxious to flip the page and look ahead to 2018 and try to figure out the things that can be done to improve the situation,” said Mike Naig, deputy secretary of the Iowa Department of Agriculture and Land Stewardship.