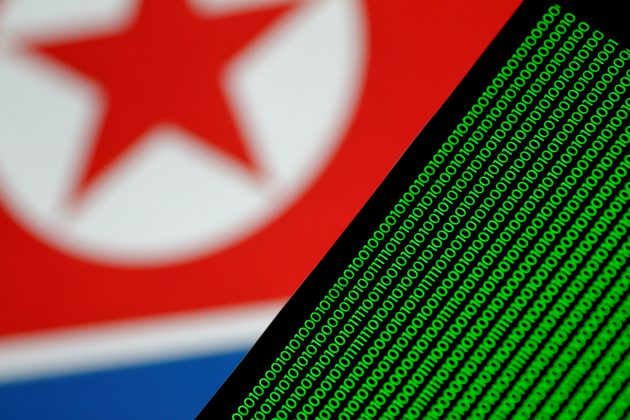 Binary code is seen on a screen against a North Korean flag in this illustration photo November 1, 2017. REUTERS/Thomas White/Illustration

By Jim Finkle and Alastair Sharp

North Korean hackers have stolen hundreds of millions of dollars from banks during the past three years, including a heist in 2016 at Bangladesh Bank that yielded $81 million, according to Dmitri Alperovitch, chief technology officer at cyber security firm CrowdStrike.

Alperovitch told the Reuters Cyber Security Summit on Tuesday that banks were concerned Pyongyang’s hackers may become more destructive by using the same type of “wiper” viruses they deployed across South Korea and at Sony Corp’s &lt;6758.T&gt; Hollywood studio.

The North Korean government has repeatedly denied accusations by security researchers and the U.S. government that it has carried out cyber attacks.

North Korean hackers could leverage knowledge about financial networks gathered during cyber heists to disrupt bank operations, according to Alperovitch, who said his firm has conducted “war game” exercises for several banks.

“The difference between theft and destruction is often a few keystrokes,” Alperovitch said.

“We know they attacked South Korean banks,” said the source, who added that fears have grown that banks in the United States will be targeted next.

Tensions between Washington and Pyongyang have been building after a series of nuclear and missile tests by North Korea and bellicose verbal exchanges between U.S. President Donald Trump and North Korean leader Kim Jong Un.

“They are thinking ‘Are we going to see an escalation in attacks from North Korea?'” said Carlin, chair of Morrison &amp; Foerster international law firm’s global risk and crisis management team.

Jim Lewis, a cyber expert with Washington’s Center for Strategic and International Studies, said it is unlikely that North Korea would launch destructive attacks on American banks because of concerns about U.S. retaliation.

Representatives of the U.S. Federal Reserve and the Office of the Comptroller of the Currency, the top U.S. banking regulators, declined to comment. Both have ramped up cyber security oversight in recent years.