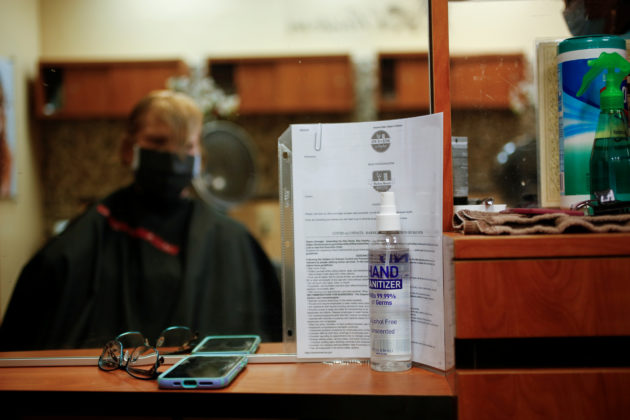 A printout of guidelines from the Arizona State Board of Barbers and a bottle of sanitizer are pictured at Donna Ferraro?s station at Passions Salon during the phased reopening from the coronavirus disease (COVID-19) restrictions, in Cave Creek, Arizona, U.S. May 11, 2020. REUTERS/Nicole Neri

DETROIT (Reuters) – Factory workers began returning to assembly lines in Michigan on Monday, paving the way for the reopening of the U.S. auto sector but stoking fears of a second wave of coronavirus infections as strict lockdowns are eased across the country.

With millions of Americans thrown out of work and economic activity cratering, a growing number of states are ending the tough restrictions that were put in place in March and April to slow the spread of the outbreak.

Some auto suppliers in Michigan, a Midwest industrial powerhouse hard hit by the pandemic and its economic fallout, reopened plants on Monday with skeleton crews to get ready for the planned May 18 restart of auto production.

“We’re starting up our foundry this week in anticipation of the orders coming in next week,” Joe Perkins, chief executive of Busche Performance Group, an engineering, casting and machining firm, said in a telephone interview. Busche had been making parts for non-auto customers deemed essential, such as Deere & Co and Emerson Electric Co, but is now firing up its furnaces for auto customers and training employees on how to be safe during the pandemic.

The auto sector accounts for 6% of U.S. economic output and employs more than 835,000 Americans. The government of Mexico, another important link in North America’s automobile production chain, is expected to make an announcement this week regarding its plans for the industry.

Overall, more than 80,000 Americans have died in the pandemic out of more than 1.34 million known U.S. infections tallied since Jan. 20, according to a Reuters tally. Michigan has counted more than 4,500 deaths related to COVID-19, the respiratory illness caused by the coronavirus, ranking fourth among the 50 U.S. states.

In Ohio, another highly industrial state, the vast majority of retail shops can start serving customers on Tuesday.

Even New York, the epicenter of the U.S. crisis, was set to relax social distancing measures by week’s end in some parts of the state outside Greater New York City.

New York Governor Andrew Cuomo said he expected several parts of the state to begin a phased-in reopening as soon as this weekend after his stay-at-home order expires on May 15.

Certain low-risk businesses and activities like landscaping, tennis courts and drive-in theaters will open, Cuomo told a news conference. “We took the worst situation in the nation and changed the trajectory,” he said.

Rural parts of New York will begin to emerge from the statewide lockdown first. But New York City and its suburbs still must clear some formidable hurdles, including forging a safety plan for its regional subway and commuter rail system.

Nearly all of the 50 states have begun loosening restrictions on daily business and social life under growing economic pressure. The pandemic has put more Americans out of work than any time since the Great Depression of the 1930s and prompted the U.S. Congress to pass trillions of dollars in emergency aid for workers and businesses.

Republican President Donald Trump, criticized by Democrats for his playing down and mishandling the outbreak, has been pushing for the reopening of the economy, which is seen as key to his chances of re-election in the Nov. 3 election.

In a Monday tweet, Trump again accused Democrats of taking their time lifting restrictions to embarrass him, a charge they have previously denied.

Public health experts have warned that moving too quickly to reopen, without vastly expanded diagnostic testing and other precautions firmly in place, risks fueling a resurgence of the virus. Polling shows a majority of Americans also concerned.

A surge of new infections in Germany and South Korea, both of which had been praised for acting aggressively after the outbreak spread from China early this year, suggested early efforts to lift restrictions could be premature.

Trump and officials from his administration scheduled a 4 p.m. (2000 GMT) news briefing on Monday to discuss testing.

The White House has directed staff to wear masks at all times in the building, except when they are at their own desks, a senior administration official said on Monday. Trump’s valet and Vice President Mike Pence’s press secretary both tested positive for the coronavirus last week.