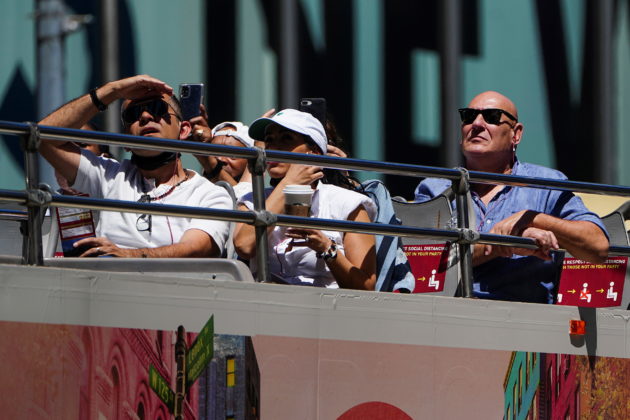 People ride a tour bus with no masks in Times Square during the coronavirus disease (COVID-19) pandemic in the Manhattan borough of New York City, New York, U.S., May 14, 2021. REUTERS/Carlo Allegri

By Jonathan Allen and Barbara Goldberg

In California, Governor Gavin Newsom said his state would keep its mask order in place for another month, despite the CDC’s new recommendations.

Cuomo and Newsom, both Democrats, have drawn criticism for their handling of the coronavirus pandemic. Newsom faces a Republican-led recall election.

New Jersey Governor Phil Murphy, also a Democrat, said he would lift mask restrictions outdoors but keep in place a mandate to wear them indoors. Murphy said schools would be required to provide full-time, in-person classroom instruction again in the fall.

On Saturday, the CDC said students in schools across the United States wear masks for the 2020-2021 academic year because not all will be inoculated.

New York will still order public transportation riders to wear face coverings and mandate them in schools and some other communal settings, Cuomo said, adding: “Unvaccinated people should continue to wear a mask.”

Cuomo said New York health officials decided to lift the mask order after reviewing the CDC’s new guidance. Some 52 percent of New York adults have been fully inoculated and 61.8 percent had received at least one shot as of Monday.

Cuomo, speaking to reporters at Radio City Music Hall, said it would be up to each business or venue how they should determine vaccination status

“I’m sure when people are coming into Radio City Music Hall, they are going to ask, ‘I’m sitting next to someone. I don’t know who they are. Are you sure they were vaccinated?'” he said. “That’s why it’s on the operator’s best interest to say ‘Yes! They had a card and they were checked when they walked in the door.'”

The three-term governor said he expected that some New Yorkers might keep wearing masks as a precaution after this week’s rule change.

Cuomo, 63, has resisted calls to resign in the face of probes by the state attorney general and legislature over accusations of sexual harassment, his office’s reporting of nursing home deaths and his use of staff members and resources in the writing of a book on his handling of the pandemic.