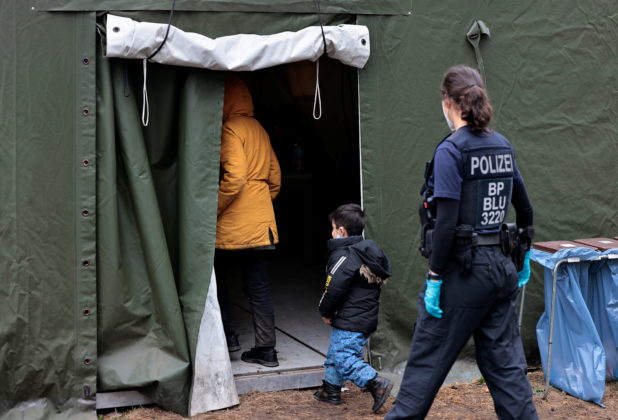 EISENHUETTENSTADT, Germany (Reuters) – Zhina ran in the dead of night through a forest near the Belarusian-Polish border. Crucifix clenched in her pocket, she slipped with her mother and younger sister through a hole cut in the wire fence by men she believed were Belarusian police.

Last week, the 17-year-old from Erbil in Iraqi Kurdistan arrived at a rapidly swelling refugee camp in eastern Germany, a few km (miles) from the Polish frontier. She was one of more than 100 refugees arriving each day as news of the Belarus corridor to Europe spreads around the Middle East.

Authorities in Brandenburg, the eastern German state that is housing most of the new arrivals, are calling for tougher action against what they see as Belarusian President Alexander Lukashenko’s hybrid war against the European Union – allowing migrants to filter through Belarusian borders into Poland or neighboring Baltic states in retaliation for EU sanctions.

“We are just managing the symptoms here,” said Michael Stuebgen, Brandenburg’s interior minister. “The actual problem is the people smuggling organized by the Belarus regime.”

All Iraqis now know about the Belarusian route to the EU, said Zhina’s mother Nihaya, who paid traffickers $15,000 to arrange the journey for herself and her daughters.

Facing crippling sanctions over his violent crackdown on protests over his disputed re-election victory last year, Lukashenko has opened his country’s borders to much of the Middle East and Africa, knowing that many will use the opportunity to pass through into the EU, starting with Poland.

In August, Stuebgen said, 200 arrived from Belarus at the camp in Eisenhuettenstadt, on Germany’s border with Poland. Now, 100-150 are arriving daily. Many are in a bad way – of 120 who arrived on Wednesday, seven tested positive for COVID-19.

Poland and Lithuania have erected fences along their border with Belarus, but few refugees want to stop in either country.

Under EU asylum rules, they have to stay in the first EU country they are registered in – so refugees wanting to live in affluent Germany – the most desirable destination for many EU-bound migrants – to dodge the authorities on the way there.

“Everything happened after midnight: it was too dangerous during the day,” said Zhina, describing how men, whom she believed to be Belarusian policemen, had trucked her and dozens of other migrants to the border and cut a hole through the fence to let them into Poland.

The three sneaked through forest on the Polish side of the border, dodging border guards flashing torches, hitching rides or getting driven by smugglers across Poland, thereby avoiding registration there, before reaching Germany.

The crucifix, a gift from her mother, was safely stowed in her pocket out of fear its chain would snag on a branch.

Her mother dreams of settling in Hamburg, where Zhina wants to study engineering at university. If successful, she and her 12-year-old sister Zhino will join the million or so migrants who settled in Germany in 2015, many of whom are now thriving.

But Brandenburg, which has the headache of settling the hundreds of new arrivals in a former police barracks that it has tripled in size with the aid of heated tents, is calling for firmer action from the German government and the EU.

Stuebgen called for “a landing ban in all of Europe for all airlines that contribute to this human trafficking” – which could include Belarus’s Belavia, which flew Zhina from Istanbul to Minsk, but also Gulf airlines, officials said.