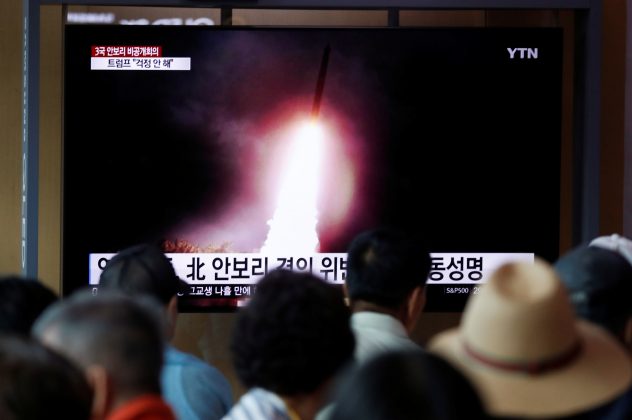 SEOUL (Reuters) – North Korea fired missiles for the third time in eight days on Friday, a series of launches that analysts say are designed to improve military capabilities and pressure the United States and South Korea as they seek to restart denuclearization talks.

U.S. officials, who have been hoping to revive the stalled talks with North Korea, played down the launches. The North has been testing missiles despite U.S. President Donald Trump’s June 30 meeting with its leader Kim Jong Un, where they agreed to revive the talks.

The diplomatic process may have some bumps but conversations with North Korea are “going on even as we speak”, U.S. Secretary of State Mike Pompeo said in Bangkok, where he is attending a meeting of the Association of Southeast Asian Nations (ASEAN).

A U.S. official said U.S. intelligence had detected at least one projectile, and possibly more, that did not pose a threat to North America. U.S. officials said initial information indicated they were similar to two other short-range missile tests by Pyongyang since last week.

North Korean state media said Kim oversaw the firing of what they described as a new large-caliber, multiple-launch guided rocket system on Wednesday. He also observed the launch of a short-range ballistic missile last week.

The launches appear intended to put pressure on South Korea and the United States to stop planned military exercises later this month and offer other concessions.

“The aim is not only to increase Pyongyang’s ability to coerce its neighbors, another goal is to normalize North Korea’s sanctions-violating tests as if they were as legitimate as South Korea’s defensive exercises.”

Trump was asked at the White House before he set off for a campaign trip to Ohio if he thought Kim was testing him and said the launches did not violate the North Korean leader’s promises.

Trump also said they were short-range missiles. “We never made an agreement on that. I have no problem,” he said.

While Trump says he never made an agreement on short-range missiles, the 15-member United Nations Security Council unanimously demanded in 2006 that North Korea suspend all activities related to its ballistic missile program and “re-establish its pre-existing commitments to a moratorium on missile launching”.

The U.N. Security Council met behind closed doors in New York on Thursday to discuss the latest missile launches.

After the meeting, representatives of Britain, France and Germany urged North Korea to engage in meaningful talks with the United States and said international sanctions need to be fully enforced until Pyongyang has dismantled its nuclear and ballistic missile programs.

“We’re working with countries all across the world, many in this region, doing great work to enforce those,” he said.

Pompeo also said he was disappointed his North Korean counterpart had canceled a planned trip to the ASEAN meet.

“I think it would’ve given us an opportunity to have another set of conversations,” he said. “I hope it won’t be too long before I have a chance to do that.”

Nuclear envoys from the United States, South Korea and Japan met on the sidelines of the ASEAN meeting on Friday, where they were expected to discuss the North’s latest tests and ways to restart working-level talks between the United States and North Korea.

Andrei Lankov, director of Korea Risk Group, a think tank, said the latest missile tests do not mean Pyongyang was no longer interested in talks with the United States.

“On the contrary, the choice of the short-range missile is a sign that, for the time being, Pyongyang remains serious about making a deal with the U.S.,” he wrote in a report for NK News, a website that monitors North Korea.