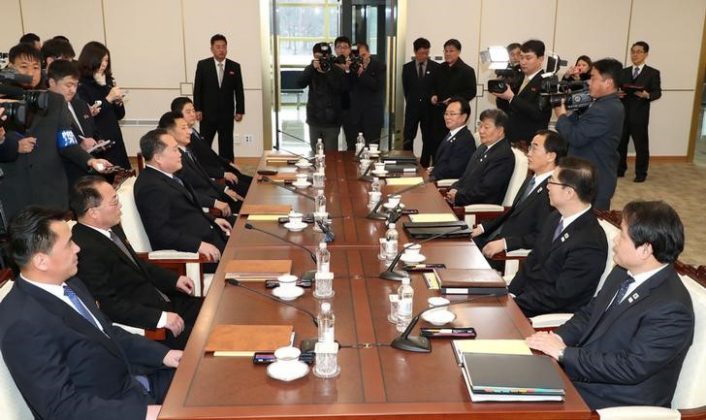 South and North Korean delegations attend their meeting at the truce village of Panmunjom in the demilitarised zone separating the two Koreas, South Korea, January 9, 2018. Yonhap via REUTERS

In a joint statement after the 11-hour talks, the North pledged to send a large delegation to next month’s Pyeongchang Winter Olympics in the South, but made a ‘strong complaint’ after Seoul proposed talks to denuclearize the Korean peninsula.

South Korea asked its neighbor to halt hostile acts that stoke tension on the peninsula, and in return, the North agreed that peace should be guaranteed in the region, the South’s unification ministry said in a separate statement.

The talks had been closely watched by world leaders keen for any sign of a reduction in tension, as fears grow over the North’s missile launches and development of nuclear weapons, in defiance of United Nations Security Council resolutions.

Earlier on Tuesday, Seoul said it was prepared to lift some sanctions temporarily so North Korean officials could visit the South for the Games. The North said its delegation would comprise athletes, high-ranking officials, a cheering squad, art performers as well as reporters and spectators.

However, some South Korean officials have said they see the Olympics as a possible opportunity for easing tension.

Foreign ministry spokesman Roh Kyu-deok said Seoul would consider whether it needed to take “prior steps”, together with the U.N. Security Council and other relevant countries, to help the North Koreans visit for the Olympics.

Working talks will be held soon to work out the details of bringing the North Koreans to the Olympics, the statement said, with the exact schedule to be decided via documented exchanges.

At Tuesday’s talks, the first since December 2015, Seoul proposed inter-Korean military discussions to reduce tension on the peninsula and a reunion of family members in time for February’s Lunar New Year holiday, but the joint statement made no mention of the reunions.

The North has finished technical work to restore a military hotline with South Korea, Seoul said, with normal communications set to resume on Wednesday. It was not immediately clear what information would be transferred along the hotline.

The North cut communications in February 2016, following the South’s decision to shut down a jointly run industrial park in the North.

North Korea also responded ‘positively’ to the South’s proposal for athletes from both sides to march together at the Games’ opening ceremony and other joint activities during the Winter Olympics, Seoul said.

Athletes of the two sides have not paraded together at international sports events since the 2007 Asian Winter Games in China, after relations chilled under nearly a decade of conservative rule in the South.

The United States, which has 28,500 troops stationed in South Korea as a legacy of the 1950-1953 Korean War, initially responded coolly to the idea of inter-Korean meetings, but U.S. President Donald Trump later called them “a good thing”.

Trump has said he would like to see talks go beyond the Olympics. “At the appropriate time, we’ll get involved,” he said.

On Tuesday, China’s foreign ministry said it was happy to see talks between North and South Korea and welcomed all positive steps. Russia echoed the sentiment, with a Kremlin spokesman saying, “This is exactly the kind of dialogue that we said was necessary.”