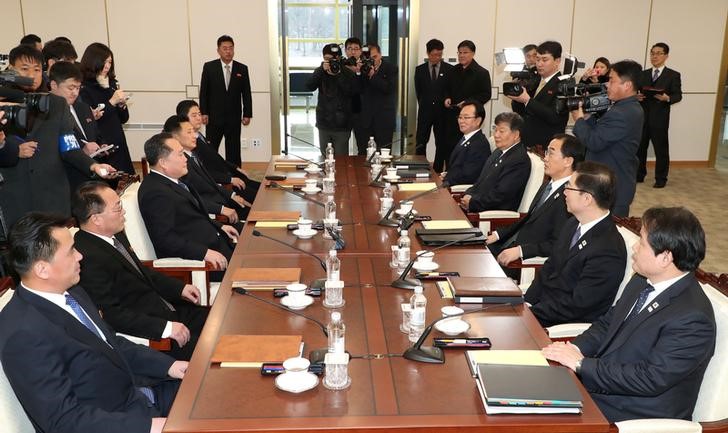 In a joint statement after the 11-hour talks, the North pledged to send a large delegation to next month’s Pyeongchang Winter Olympics in the South, but made a ‘strong complaint’ after Seoul proposed talks to denuclearize the Korean peninsula.

South Korea asked its neighbor to halt hostile acts that stoke tension on the peninsula, and in return, the North agreed that peace should be guaranteed in the region, the South’s unification ministry said in a separate statement.

The talks had been closely watched by world leaders keen for any sign of a reduction in tension, as fears grow over the North’s missile launches and development of nuclear weapons, in defiance of United Nations Security Council resolutions.

Earlier on Tuesday, Seoul said it was prepared to lift some sanctions temporarily so North Korean officials could visit the South for the Games. The North said its delegation would comprise athletes, high-ranking officials, a cheering squad, art performers as well as reporters and spectators.

However, some South Korean officials have said they see the Olympics as a possible opportunity for easing tension.

Foreign ministry spokesman Roh Kyu-deok said Seoul would consider whether it needed to take “prior steps”, together with the U.N. Security Council and other relevant countries, to help the North Koreans visit for the Olympics.

Working talks will be held soon to work out the details of bringing the North Koreans to the Olympics, the statement said, with the exact schedule to be decided via documented exchanges.

At Tuesday’s talks, the first since December 2015, Seoul proposed inter-Korean military discussions to reduce tension on the peninsula and a reunion of family members in time for February’s Lunar New Year holiday, but the joint statement made no mention of the reunions.

The North has finished technical work to restore a military hotline with South Korea, Seoul said, with normal communications set to resume on Wednesday. It was not immediately clear what information would be transferred along the hotline.

The North cut communications in February 2016, following the South’s decision to shut down a jointly run industrial park in the North.

North Korea also responded ‘positively’ to the South’s proposal for athletes from both sides to march together at the Games’ opening ceremony and other joint activities during the Winter Olympics, Seoul said.

Athletes of the two sides have not paraded together at international sports events since the 2007 Asian Winter Games in China, after relations chilled under nearly a decade of conservative rule in the South.

The United States, which has 28,500 troops stationed in South Korea as a legacy of the 1950-1953 Korean War, initially responded coolly to the idea of inter-Korean meetings, but U.S. President Donald Trump later called them “a good thing”.

Trump has said he would like to see talks go beyond the Olympics. “At the appropriate time, we’ll get involved,” he said.

On Tuesday, China’s foreign ministry said it was happy to see talks between North and South Korea and welcomed all positive steps. Russia echoed the sentiment, with a Kremlin spokesman saying, “This is exactly the kind of dialogue that we said was necessary.” 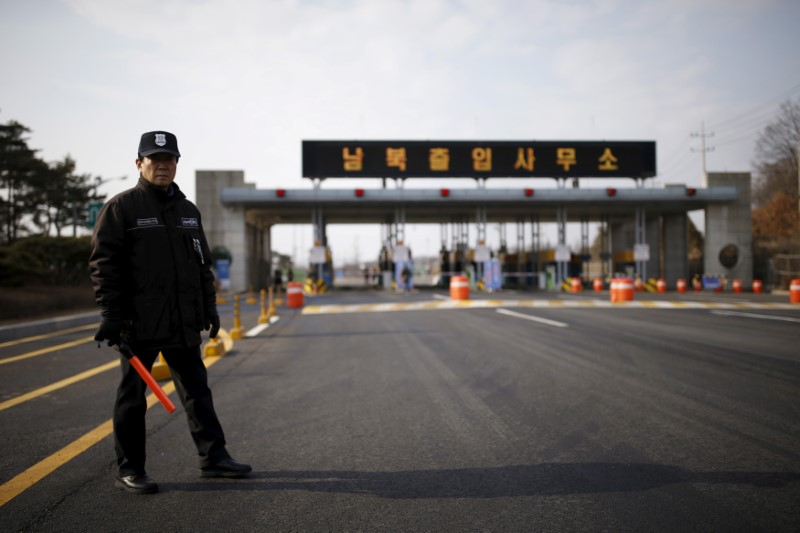 There was no immediate response by the North to the proposal for talks later this week. The two sides technically remain at war but Moon, who came to power in May, has pledged to engage the North in dialogue as well as bring pressure to impede its nuclear and missile programs.

The offer comes after the North claimed to have conducted the first test of an intercontinental ballistic missile (ICBM) earlier this month, and said it had mastered the technology to mount a nuclear warhead on the missile. South Korea and the United States, its main ally, dispute the claim.

“Talks and cooperation between the two Koreas to ease tension and bring about peace on the Korean peninsula will be instrumental for pushing forth a mutual, virtuous cycle for inter-Korea relations and North Korea’s nuclear problem,” the South’s Unification Minister Cho Myoung-gyon told a news briefing.

The South Korean defense ministry proposed talks with the North on July 21 at Tongilgak to stop all activities that fuel tension at the military demarcation line.

Tongilgak is a North Korean building at the Panmunjom truce village on the border used for previous inter-Korea talks. The last such talks were held in December 2015.

Cho also urged the restoration of military and government hotlines across the border, which had been cut by the North last year in response to the South imposing economic sanctions after a nuclear test by Pyongyang. In all, the North has conducted five nuclear tests and numerous missile tests.

The South also proposed separate talks by the rival states’ Red Cross organizations to resume a humanitarian project to reunite families separated during the 1950-53 Korean War in closely supervised events held over a few days.

The South Korean Red Cross suggested talks be held on Aug. 1, with possible reunions over the Korean thanksgiving Chuseok holiday, which falls in October this year.

The last such reunions were held in October 2015 during the government of Moon’s predecessor under a futile push for reconciliation following a sharp increase in tension over border incidents involving a landmine blast and artillery fire.

China, which has close ties to Pyongyang despite Beijing’s anger over North Korea’s missile and nuclear tests, welcomed the proposal, saying cooperation and reconciliation between the two Koreas was good for everyone and could help ease tensions.

“We hope that North and South Korea can work hard to go in a positive direction and create conditions to break the deadlock and resume dialogue and consultation,” Chinese Foreign Ministry spokesman Lu Kang told a daily news briefing.

The proposals come after Moon said at the G20 summit in Hamburg earlier this month that he was in favor of dialogue with the North despite the “nuclear provocation” of its latest missile test.

When Moon visited Washington after being elected president, he and U.S. President Donald Trump said they were open to renewed dialogue with North Korea but only under circumstances that would lead to Pyongyang giving up its weapons programs.

“The fact that we wish to take on a leading role in resolving this (North Korean) issue has already been understood at the summit with the United States and the Group of 20 summit meetings,” Cho said on Monday.

In the proposal for talks, South Korea did not elaborate on the meaning of hostile military activities, which varies between the two Koreas. South Korea usually refers to loudspeaker propaganda broadcasts by both sides, while the North wants a halt to routine joint U.S.-South Korea military drills.

Moon suggested earlier this month hostile military activities at the border be ended on July 27, the anniversary of the 1953 armistice agreement that ended the Korean War. Since no truce was agreed, the two sides remain technically at war.

When asked if South Korea was willing to “be flexible” on military drills with the United States should North Korea be open to talks, Cho said the government had not discussed the matter specifically.

Pyongyang has repeatedly said it refuses to engage in all talks with the South unless Seoul turns over 12 waitresses who defected to the South last year after leaving a restaurant run by the North in China.

North Korea says the South abducted the 12 waitresses and the restaurant manager and has demanded their return, but the South has said the group decided to defect of its own free will. Cho said this matter is not included on the talks agenda.

In an act to rein in the North, the United States is preparing new sanctions on Chinese banks and firms doing business with Pyongyang possibly within weeks, two senior U.S. officials said last week.