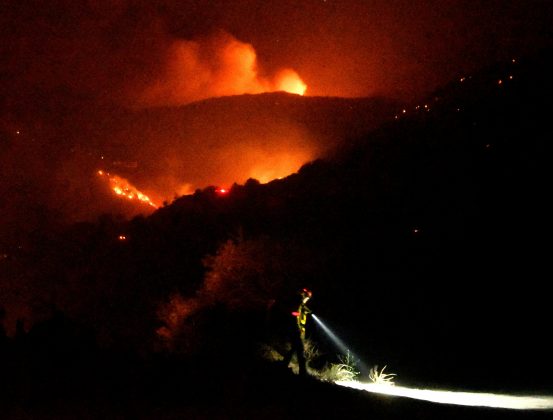 Firefighters keep watch on the Thomas wildfire in the hills and canyons outside Montecito, California, U.S., December 16, 2017. REUTERS/Gene Blevins

(Reuters) – Thousands of Southern Californians fled their homes on Monday as a powerful rain storm that could cause flash floods and trigger mudslides soaked steep slopes where a series of intense wildfires burned off vegetation last month.

Heavy downpours that could produce more than 1 inch (2.5 cm) of rain per hour were expected through Tuesday evening, forcing officials to order or advise Ventura, Santa Barbara and Los Angeles county residents who live near where wildfires burned to evacuated their homes.

“Recent burn areas will be especially vulnerable where dangerous mud and debris flows are possible,” the National Weather Service said in a statement.

Several December wildfires, included a blaze known as the Thomas Fire which was the largest in the state’s history, burned away vegetation that holds the soil in place and baked a waxy layer into the earth that prevents water from sinking deeply into the ground.

About 30,000 residents were under evacuation orders or advisories on Monday, ABC news reported.

“I’m just tired. I can’t seem to get my life kick-started,” Teri Lebow, whose Montecito, California was damaged by the wildfires, told the Los Angeles Times.

The storm system was expected to produce 4 inches to 7 inches (10 to 18 cm) in the foothills and mountains with 9 inches (23 cm) in isolated areas. Three inches (7 cm) to two feet (61 cm) of snow was also forecast for higher elevations, the National Weather Service said.

(Reporting by Brendan O’Brien in Milwaukee; Editing by Robin Pomeroy)