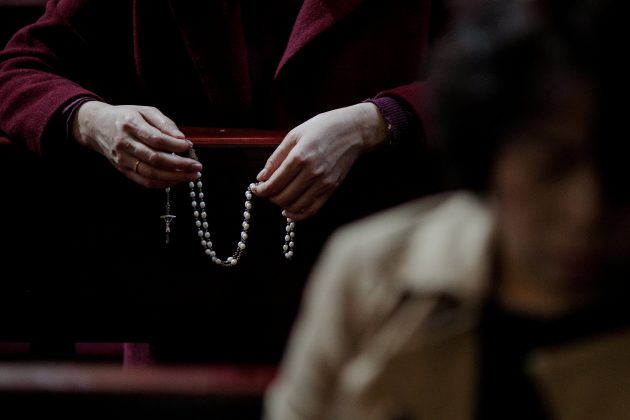 FILE PHOTO: A Catholic faithful holds a rosary during a mass on Holy Thursday at the Cathedral of the Immaculate Conception in Beijing, China March 29, 2018. REUTERS/Damir Sagolj/File Photo

YINGTAN, China (Reuters) – Like many Chinese Catholics, Lin Jinqing was shocked when news trickled through to him of an impending deal between Beijing and the Vatican that would end a long dispute over control of the Church in China.

As a member of a so-called “underground” church – one that is not sanctioned by Beijing – in the southeastern province of Jiangxi, Lin and fellow parishioners have for years been attending clandestine Bible readings and services.

In recent years, as Chinese authorities cracked down on underground services as part of broader restrictions on religious groups, he has also started attending services at state-sanctioned churches in order to avoid trouble.

“The pressure on underground church members has been quite big,” said Lin, who lives in Yingtan, a gritty city of one million people in southeastern Jiangxi province.

Now, the deal between China and the Vatican is worrying him.

“Many of us don’t know what to think,” he said. He said that the underground churchgoers wanted more freedom to worship. “But at what cost?”

A senior Vatican source told Reuters last month that a framework accord was ready and could be signed in months. The expected deal would allow China to appoint bishops, in consultation with the Vatican, and eventually could lead to the restoration of full diplomatic relations between the two sides for the first time in seven decades.

Until now, China and the Vatican have not recognized most bishops named by each other. Underground Catholics like Lin have stayed loyal to Vatican-appointed bishops – and the Pope.

News of the impending deal has split communities of Catholics across China, according to some critics like Cardinal Joseph Zen in Hong Kong.

Some fear greater suppression should the Vatican cede greater control to Beijing, but others want to see rapprochement.

“We hope for an early establishment of ties. It will definitely bring advantageous policies, and greater openness to the Church,” said Father Pan Yinbao, a priest affiliated with the official Church in Yingtan, in an interview with Reuters. “There is a need for change. There is a need for adjustment.”

Lin’s apprehensions, meanwhile, are echoed in WeChat groups used by Catholics, and the few uncensored religious news sites still viewable in China like www.tianzhujiao.life – as is cautious criticism.

“Churchgoers stay hopeful on the Vatican-China deal, but no one wants to live in a bird cage or only fighting for a larger space in the bird cage,” read one post by a blogger named Priest Shanren. “People are born to be free.”

The Chinese Communist Party has long sought to control organized groups, including religious ones, whose devotees can only worship under the auspices of state-sanctioned bodies, like the Catholic Patriotic Association.

Of the 146 bishops now in China, about a third are affiliated with the underground church.

A source close to the Vatican based in Hong Kong said that there would be a tightening of religious freedoms following a restructuring of China’s religious affairs authority this year, to bring it directly under party, rather than state control.

A Chinese government statement explaining the move said it would help China “steadfastly persevere in the direction of Sinicizing our country’s religions”.

This week, Guo Xijin, a bishop in the southeastern province of Fujian was detained by authorities for refusing to officiate Easter services with an official bishop. Guo, who is reportedly one of two Chinese bishops the Vatican has asked to retire or accept demotion to make way for a Beijing-backed one, couldn’t be reached by Reuters for comment.

Some critics and Chinese Catholics say rapprochement between Beijing and the Vatican could drive an even deeper wedge between the faithful in China, and engender some bitterness toward the Vatican.

Those divisions are evident in places like Jiangxi province, where there are factions even within the underground Church.

When the province’s then 92-year-old Vatican-appointed bishop, Thomas Zeng Jingmu, retired in 2012, one faction, led by a relative, split from another underground faction loyal to the Vatican’s appointed successor, Bishop John Peng Weizhao.

The faction loyal to Peng, which now has at least six priests leading underground Masses, is likely to remain opposed to any deal and lead to the erosion of the Vatican’s authority, according to a source with close ties to underground Catholics in Jiangxi’s three dioceses.

She said that some devout Catholics across China were prepared to cut ties with the Vatican over a deal. “If they’re abandoned by the Vatican they’ll pray to God themselves at home,” said the source who declined to be named given the sensitivity of the matter.

“The Vatican has done the calculations and they feel it doesn’t matter if they abandon the underground, because they are a relatively small group, and will sooner or later fade away.”

Peng, who was detained by authorities for six months in 2014, couldn’t be reached for comment.

Archbishop Paul Gallagher, the Vatican’s equivalent of a foreign minister, said at a conference on Chinese Catholicism in Rome, that while the faithful in China had experienced “great suffering” in the past, the country was seeking to regain a central position in the world and so efforts should be made to forge Catholicism with “Chinese forms”.

While some dioceses in coastal Fujian and in inland Hebei have large clusters of underground Catholics, Jiangxi’s are less influential. Many in the area, including 62-year-old Liu Ande, have switched to the official Church.

“We are sons and daughters of God but for our country, we must listen to the leaders here,” Liu said after a Sunday Mass at the official Catholic church in Yingtan.

The church is a shabby building in need of paint wedged into a residential courtyard with several cracked windows, where 48 mostly elderly Catholics listened to a sermon by Father Pan.

After Mass, on the steps of the church, some of the tensions of the impending deal were laid bare.

Liu asked Pan to verify if the Vatican had asked another Bishop in southern China besides Guo, to step down.

“Is it true? We’ve heard it’s true? It should be true,” said Liu. “Everyone is opposed to this.”

But Pan, the official priest, now dressed in a blue fleece jacket after mass, disputed the standoff.

“Whether it’s true or not isn’t clear,” he told Liu, who began nodding. “There’s a lot of news on the internet.”

Another worshipper dressed in a pink coat, who would only give her surname as Li, said she would be praying for a better tomorrow.

“If you’ve done bad things, you must then try to do lots of good things,” she said. “There shouldn’t be tensions,” she added. “We are all just trying to save our own souls.”