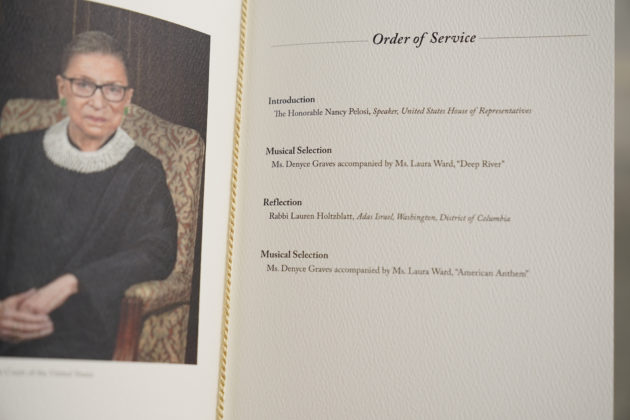 A program for the service of Justice Ruth Bader Ginsburg, is shown at the U.S. Capitol, where she will lie in state, in Washington, U.S., September 25, 2020. Alex Brandon/Pool via REUTERS

WASHINGTON (Reuters) – Supreme Court Justice Ruth Bader Ginsburg, a champion of gender equality, will make history again on Friday as the first woman and the first Jewish person to lie in state in the U.S. Capitol.

Democratic presidential nominee Joe Biden will be among those who will visit to pay their respects on Friday, when the late justice’s casket will be placed in National Statuary Hall, encircled by sculptures of prominent Americans.

Ginsburg, a stalwart liberal on the high court since 1993, died last Friday at age 87. Known simply as RBG, she was an icon to millions of Americans – including young girls – after a long legal career built on fighting for women’s rights.

Her ceremony will feature remarks by a woman rabbi, House of Representatives Speaker Nancy Pelosi said.

“We have a lot of cause for … observance of a historic time, for a historic woman who did more for the equality of women than anybody in our history,” Pelosi told her weekly news conference on Thursday.

“Her passing is like a death in so many families in our country because so many people pinned their hopes, heeded her guidance, admired her stamina, her love of the arts, bringing civility to her relationships in the court and in the country,” Pelosi said.

Civil rights pioneer Rosa Parks was also mourned at the Capitol in 2005, but as a private citizen, she lay “in honor,” not “in state.” A statue of Parks, placed in 2013, will overlook Ginsburg’s casket during the ceremony.

Biden, who presided over Ginsburg’s confirmation hearings as a senator in 1993, said the judge was a “voice for freedom and opportunity.” He has called for Republicans to honor her wishes and not consider a nominee until after the Nov. 3 presidential election. Also visiting the Capitol on Friday will be Biden’s running mate, Kamala Harris, and Biden’s wife, Jill.

Statuary Hall was prepared for the ceremony by Thursday afternoon. Thick black ribbons were affixed to the colossal marble columns around the room’s perimeter, surrounding the area where a catafalque was to hold Ginsburg’s flag-draped coffin.

Crowds of mourners have flocked to the U.S. Supreme Court, across the street from the Capitol, since Ginsburg’s death was announced, standing vigil and leaving flowers and signs.

Just down a hallway from Statuary Hall, Trump’s fellow Republicans – who narrowly control the bitterly divided Senate – have pledged to confirm his as-yet-unidentified nominee to replace Ginsburg within the next few weeks, angering Democrats who feel he should wait until after the election.

Due to the coronavirus pandemic, Ginsburg’s admirers have had to pay their respects outdoors at her coffin for two days of public viewing under the Supreme Court’s soaring portico.

The Capitol ceremony on Friday morning will be limited to invited guests because of concerns about the virus.