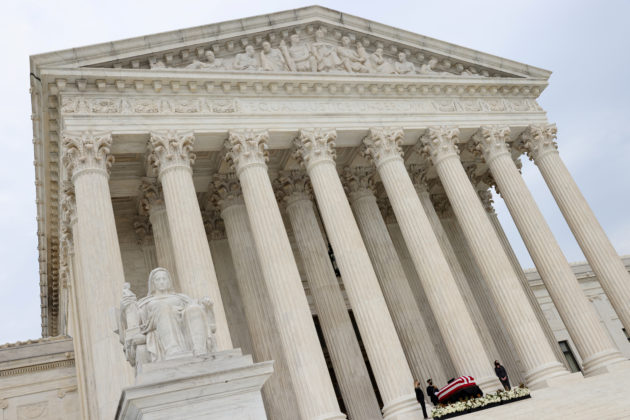 FILE PHOTO: Justice Ruth Bader Ginsburg lies in repose under the Portico at the top of the front steps of the U.S. Supreme Court building in Washington, DC, U.S., September 24, 2020. REUTERS/Jonathan Ernst

WASHINGTON (Reuters) – Amid a flurry of major rulings early this summer, the U.S. Supreme Court in an under-the-radar case handed a significant win to Native Americans by finding for the first time that almost half of Oklahoma is tribal land.

The ruling was a 5-4 decision in which conservative Justice Neil Gorsuch joined the four liberal justices, one of a handful of such surprise victories by the liberal wing of the court in recent terms.

The death of liberal Justice Ruth Bader Ginsburg and her possible replacement by a conservative appointed by President Donald Trump imperil such unlikely liberal wins in coming years.

The 5-4 conservative majority before Ginsburg’s death meant that the liberals on certain key issues only needed one conservative colleague siding with them.

Now, if Trump replaces her, they would need two, with likely implications for headline-grabbing issues on which liberals have prevailed in recent years, including abortion and gay rights, as well as lesser-known cases.

“The stars would have to line up,” said John Elwood, a Supreme Court lawyer.

The last two Supreme Court terms have defied expectations with a series of 5-4 rulings in which Chief Justice John Roberts joined the liberals in ruling against Trump’s bid to add a citizenship question to the U.S. census, blocking the president’s effort to rescind protections for young immigrants known as “Dreamers” and striking down a Louisiana abortion restriction.

But there are also several lesser-noticed 5-4 rulings that would have been unlikely with a 6-3 conservative majority.

The Oklahoma ruling was one. It is one of three 5-4 cases on Native American issues in which Gorsuch, who was appointed by Trump, joined the four liberals in the majority.

Similarly, Gorsuch two years ago was the fifth vote for the liberal wing of the court in striking down part of an immigration law that made it easier to deport people convicted of certain criminal offenses. He also cast the deciding vote that year in two 5-4 criminal cases in favor of defendants.

Last year, Justice Brett Kavanaugh, another conservative appointed by Trump, joined the four liberals in a 5-4 ruling that gave the greenlight to an antitrust lawsuit accusing Apple Inc of forcing consumers to overpay for iPhone software applications.

In an important case on evolving privacy rights in the age of the smartphone, Roberts and the four liberals prevailed in another 5-4 case in 2018 as the court imposed limits on the ability of police to obtain cellphone data pinpointing the past location of criminal suspects.

Whether the three liberals will be able to cobble together a majority in similar cases in future depends in large part on the identity of Trump’s nominee.

Trump has said he intends to announce his nomination on Saturday, with conservative appeals court judges Amy Coney Barrett and Barbara Lagoa considered the frontrunners to be named to succeed Ginsburg, who died last Friday at age 87. The Republican-controlled Senate, which has to vote on whether to approve or reject the nomination, is poised to act even ahead of Nov. 3, when Trump is seeking re-election.

Carolyn Shapiro, a professor at Chicago-Kent College of Law, said that even before Ginsburg’s death, the 5-4 cases in which liberals prevailed were contingent on the individual legal reasoning of the conservative who joined them. It might be possible to win certain cases with a 6-3 majority, she added, but it will be harder.

“Those occasions are likely to be fairly idiosyncratic and mostly unpredictable,” Shapiro said.

One area where liberal votes may still be key is on LGBT rights. In June, the court to the dismay of conservatives ruled 6-3 that federal law that outlaws sex discrimination in the workplace applies to gay, lesbian and transgender people.

In that case, both Roberts and Gorsuch were in the majority with the liberals, so even with Ginsburg’s absence, five of the votes in favor of LGBT workers remain on the court. Other cases on the definition of sex discrimination under other federal laws are likely to reach the court soon.

Shannon Minter, a lawyer with the National Center for Lesbian Rights, said he is “hopeful” that the majority remains intact but noted that every time there is a change in personnel on the court it can change the internal dynamic in unpredictable ways.

As such, he added, “Ginsburg’s absence is a significant factor.”