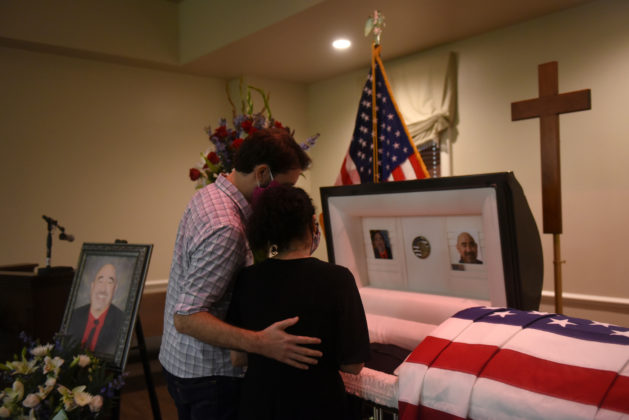 By Callaghan O’Hare and Maria Caspani

HOUSTON (Reuters) – As hundreds of thousands of people in Texas fled their homes ahead of Hurricane Laura on Wednesday, Michelle Gutierrez was in Houston burying her husband David, who died of COVID-19 on Aug. 14.

The couple would have celebrated their 10th wedding anniversary on Sept. 4, a few days after David’s 54th birthday. Michelle and David met at a mechanic’s shop in Houston in 2009, when he had stepped in as a translator to help her with a mechanic who only spoke Spanish.

He then offered to fix her computer, and the rest is history. They built a life together in Houston, where they raised five children and he worked as a software engineer.

In early July, David was hospitalized after his symptoms of COVID-19, the disease caused by the new coronavirus, worsened. His wife and two daughters had tested positive but showed no symptoms.

David would fight the virus for over a month at Houston’s St. Luke’s in The Woodlands hospital, where he eventually died of heart failure.

“It’s been a roller coaster, every day is different,” Michelle said on the day of his funeral, her voice breaking with emotion. “One day you’re fine and the next day, you walk around and memories flood your mind… You just wish this was all a dream.”

About a week after her husband was hospitalized, Michelle and her daughters gathered under his hospital window to pray for him.

“And then after that first night I was like, ‘You know what, I’m gonna come in every night, honey, I’m going to be here every night, praying for you and just being there in spirit’,” she said.

And so she did, until the Friday in August when David passed away.

Michelle said she kept trying to communicate with her husband as his condition worsened. At first, before he was put on a ventilator, they managed to text one another, she said. But once he was in a coma, she began faxing letters to the hospital, and nurses would read them aloud to him.

David is one of thousands who have succumbed to the coronavirus in Texas, where a spike in cases in June and July strained hospital systems as the virus engulfed many southern states.

At David’s wake, a bottle of hand sanitizer and social distancing signs were prominently displayed as masked mourners walked to the casket to bid their farewells.

As for the future, Michelle said she was enrolling in a college nursing program. She had already planned to do so before her husband’s passing, but feels more motivated now.

“That’s more so now than before after seeing how these nurses took care of David and they were wonderful… And I could not have done it without them.”