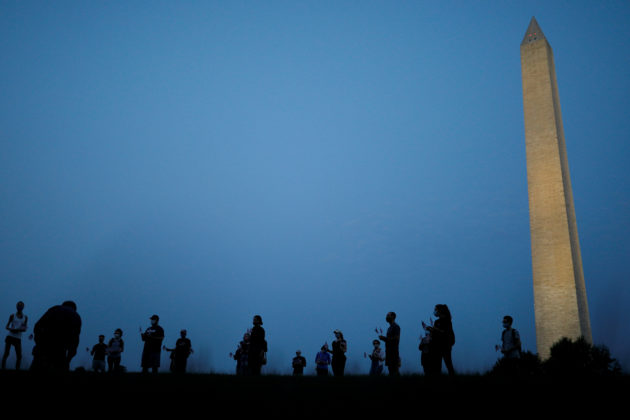 Activists stand with American flags at sunrise to memorialize victims of the coronavirus disease (COVID-19) outbreak, near the Washington Monument in Washington, U.S., August 27, 2020. REUTERS/Tom Brenner

(Reuters) – U.S. deaths from the novel coronavirus topped 180,000 on Thursday after a surge of new cases in June and July, many of them in hotspots like California, Florida, and Texas.

There were some signs of an improving outlook. Last week, deaths fell 17% from the prior week and below an average of 1,000 a day for the first time in weeks, according to a Reuters analysis.

However, while U.S. metrics on cases, deaths, hospitalizations and test positivity rates were declining, health experts warned there could be another surge as schools reopen and colder weather forces more gatherings indoors.

This week, the U.S. Centers for Disease Control and Prevention (CDC) said people exposed to COVID-19 but not symptomatic may not need to be tested. This contradicted earlier guidance from the CDC, shocking doctors and politicians and prompting accusations that it may have been based not on sound science but on political pressure from the Trump administration.

The governors of New York, New Jersey and Connecticut slammed the CDC’s move as “reckless” and “not based on science,” and said they will not change testing guidelines in their states.

“CDC and HHS have not shared their scientific rationale for this change in policy, which substitutes sound science-based public health guidance with the president’s misinformation,” they said in a joint statement. “Health experts recommend testing close contacts of individuals with COVID-19 to identify and prevent asymptomatic spread. This type of robust testing by our states has been a key factor in our success so far to flatten the curve in the tri-state area.”

On Wednesday, the top U.S. government infectious disease expert Anthony Fauci told CNN he was having surgery during discussion of the change and expressed worry about the CDC’s move.

U.S. confirmed cases are now over 5.8 million – the highest total in the world. The U.S. death toll is also the world’s highest.

U.S. consumer confidence dropped in August to its lowest in more than six years, as households worried about the labor market and incomes, casting doubts on the sustainability of the economy’s recovery from the COVID-19 recession.

The ebb in confidence followed the expiration of a $600 weekly unemployment benefit supplement on July 31.

For weeks, Republicans and Democrats have been deadlocked over the size and shape of a fifth coronavirus-response bill, on top of the approximately $3 trillion already enacted into law.