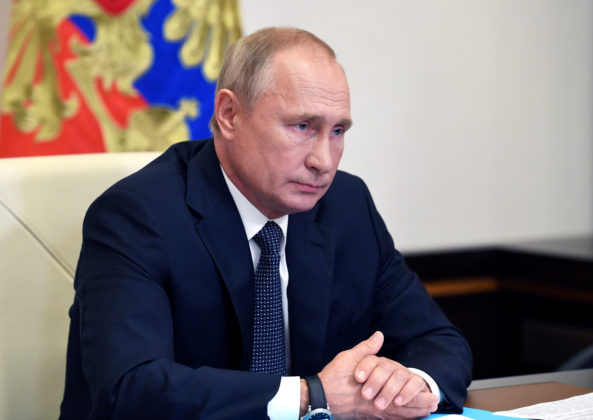 FILE PHOTO: Russian President Vladimir Putin chairs a meeting with members of the government via video link at the Novo-Ogaryovo state residence outside Moscow, Russia August 11, 2020. Sputnik/Aleksey Nikolskyi/Kremlin via REUTERS

MOSCOW (Reuters) – Russian President Vladimir Putin on Friday proposed holding a seven-way online summit of the five permanent members of the U.N. Security Council together with Germany and Iran, to outline steps aimed at avoiding a confrontation over the Iran arms embargo.

In a Kremlin statement, Putin said discussions were becoming increasingly tense over the Iranian issue at the Security Council, which began voting on Thursday on a U.S. proposal to extend an arms embargo on Iran, which is opposed by veto-wielding Russia and China.

“The situation is escalating. Unfounded accusations against Iran are being put forward,” said Putin, adding that Russia remained fully committed to the Iran nuclear deal.

The 13-year-old arms embargo is due to expire in October under a 2015 nuclear deal between Iran, Germany, Russia, China, Britain, France and the United States that prevents Tehran from developing nuclear weapons in return for sanctions relief.

Russia suggested an online video conference to avoid aggravating the situation at the U.N. Security Council.

Putin described the matter as urgent and urged the other nations to carefully consider Russia’s offer, saying the alternative was further escalation of tensions and a growing risk of conflict.