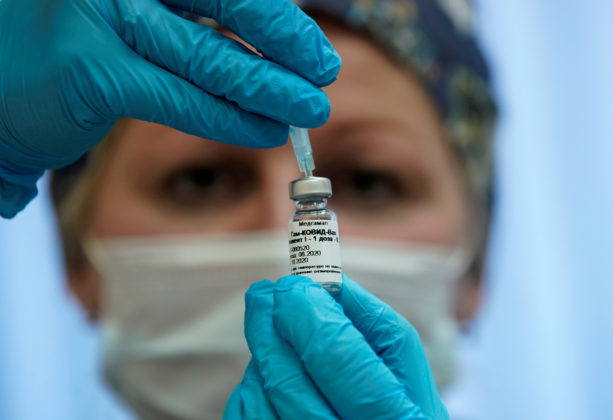 FILE PHOTO: A nurse prepares Russia's "Sputnik-V" vaccine against the coronavirus disease (COVID-19) for inoculation in a post-registration trials stage at a clinic in Moscow, Russia September 17, 2020. REUTERS/Tatyana Makeyeva

NEW YORK (Reuters) – Drugmakers and research centers around the world are working on COVID-19 vaccines, with large global trials of several of the candidates involving tens of thousands of participants well underway.

As some companies close in on unveiling their initial findings – with Canadian and European regulators already reviewing early data on some vaccines – the following is what we know about the race to deliver vaccines to help end the coronavirus pandemic that has claimed over a million lives:

Who is furthest along?

U.S. drugmaker Pfizer Inc with German partner BioNTech SE, U.S. biotech Moderna Inc and Britain-based AstraZeneca Plc in conjunction with University of Oxford researchers could provide early analyses of data from their various large trials as early as October or November. Johnson & Johnson is a bit further behind.

What happens in these trials?

The companies are testing their vaccines against a placebo – typically saline solution – in healthy volunteers to see if the rate of COVID-19 infection among those who got the vaccine is significantly lower than in those who received the dummy shot. Neither trial participants nor researchers know who has received the vaccine or placebo until the data is ready for review, or unblinded. The studies rely on subjects becoming naturally infected with COVID-19, so how long it takes to generate results largely depends on how pervasive the virus is where the trials are being conducted. In areas with large outbreaks and community spread, infections will pile up faster.

How will we know if the vaccine works?

The United States, the European Union, the United Kingdom and the World Health Organization have all set similar minimum standards for effectiveness. Vaccines must demonstrate at least 50% efficacy – meaning at least twice as many infections among volunteers who got a placebo as among those in the vaccine group. Independent panels oversee the trials to monitor for safety and effectiveness since the data is hidden from companies and researchers. These data safety monitoring boards take a peek at the interim results at pre-determined milestones, such as after a certain number of people have become infected. If the vaccine is looking significantly better than the placebo, the companies can apply for emergency use, and the study may be halted or continue to its intended conclusion. A trial can also be halted if the panel determines the vaccine to be unsafe.

Will regulators ensure a vaccine is safe before making it available to the public?

The U.S. Food and Drug Administration has said it will not approve a vaccine unless it is both effective and safe. Earlier this month, it added more stringent safety guidelines for U.S. vaccines. The FDA wants developers to follow trial subjects for at least two months after they receive their final vaccine dose to check for any side effects that may crop up. The agency will consider an emergency use authorization (EUA) once that data is collected from at least half of the trial’s participants. The UK Medicines and Healthcare products Regulatory Agency will review the vaccines for the UK and the European Medicines Agency will review vaccines for European Union use.

When will regulators decide?

Regulators will review the vaccines after the companies have enough data to submit applications seeking an EUA or formal approval. Moderna’s first look at data is more likely to come next month. AstraZeneca could provide a look at late-stage data in November. Pfizer/BioNtech said it may have data as early as October, but that it would wait for safety data it expects in the third week of November to file with U.S. regulators.

Regulators for Europe and Canada are considering data on a rolling basis, as it becomes available. The UK and the United States both expect speedy reviews of initial data for possible emergency use before more traditional lengthy reviews for formal commercial approvals.

Could these be the first approved coronavirus vaccines?

Yes, although China and Russia are on a similar timeline. China launched an emergency use program in July aimed at essential workers and others at high risk of infection that has vaccinated hundreds of thousands of people. At least four vaccines are far along including from China National Biotec Group [CHNAPF.UL] (CNBG), CanSino Biologics <6185.HK> and Sinovac. Sinovac and CNBG have said to expect early trial data as soon as November. Russia’s Gamaleya Institute has begun a 40,000-person late-stage trial and is expected to have early data at the end of October or early November. Russia has also given the vaccine to at least hundreds of “high-risk” members of the general population.

Is U.S. authorization up to President Trump?

The FDA must make sure that the benefits of a vaccine outweigh the risks before authorization since they are intended to be given to hundreds of millions of healthy people. However, the U.S. Department of Health and Human Services (HHS) has the authority to override the FDA’s recommendation. President Donald Trump has complained about the new safety guidelines, which delay any vaccine availability until after the Nov. 3 presidential election at the earliest. The Trump administration can hire and fire HHS officials, opening the possibility of political pressure to approve a vaccine.