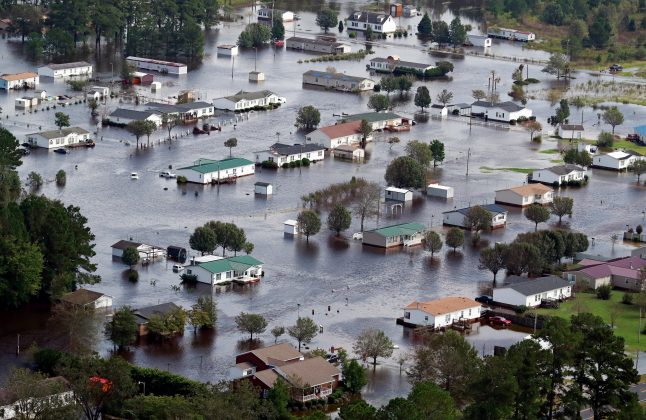 Houses sit in floodwater caused by Hurricane Florence, in this aerial picture, on the outskirts of Lumberton, North Carolina, U.S. September 17, 2018. REUTERS/Jason Miczek

WILMINGTON/FAYETTEVILLE, N.C. (Reuters) – Rising flood waters threatened communities across the Carolinas on Tuesday as storm Florence hit the U.S. Northeast with heavy rains and tornadoes after killing at least 32 people.

Widespread flooding has already reached roofs, turned highways into rivers and left thousands to be saved by rescue workers. Waterways are expected to keep rising on Tuesday in places like Fayetteville, North Carolina, a city of 200,000 in the southern part of the state, according to the National Weather Service (NWS). 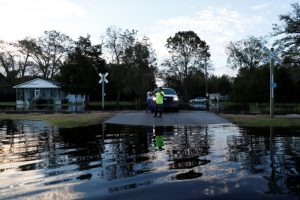 At least 32 people have been killed since Florence came ashore as a hurricane on Friday, including 25 in North Carolina and six in South Carolina. One person was killed when at least 16 tornadoes developed from Florence on Monday in Virginia, where dozens of buildings were destroyed, the NWS reported.

The dead included a 1-year-old boy swept from his mother as they tried to escape their car amid floodwaters. The woman had driven around barricades to reach a closed road, the sheriff’s office in Union County, near North Carolina’s border with South Carolina, said on Facebook.

“Flooding is still going to be a concern into the weekend and into next week,” NWS meteorologist Hal Austin said, noting there is a chance of rain for the region on Tuesday and Wednesday. “No more water, not even a drop, please.”

With 1,500 roads closed across North Carolina, fire and rescue crews were waiting to go into many areas to assist with structural damage after Florence dumped up to 36 inches (91 cm) of rain on the state since Thursday.

Forecasters warned heavy rains could cause flash flooding in the U.S. Northeast on Tuesday. As much as 6 inches (15 cm) of rain was possible in parts of the region, the NWS said. The storm was now passing through the mid-Atlantic and was about 100 miles (165 km) northwest of Philadelphia, according to the NWS.

It is expected to keep producing heavy rain over Pennsylvania into southern New England. 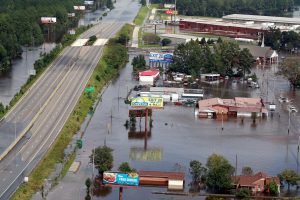 Thousands of rescues have taken place in the Carolinas and more than 650 people were taken to safety in and around Wilmington, North Carolina, said Barbi Baker, a spokeswoman for New Hanover County. The city took a direct hit when Hurricane Florence came ashore and has been largely cut off since then due to storm surges and flooding from the Cape Fear River.

More than 340,000 customers were without power on Tuesday morning, according to power companies, down from a peak of nearly 1 million outages.

North Carolina had deployed about 2,000 boats and 36 helicopters to help people stranded in floods, the state’s director of emergency management, has said.

The Coast Guard said it had 26 helicopters and 11 aircraft looking for people in trouble.

Property damage from the storm is expected to total at least $17 billion to $22 billion but that forecast could be conservative depending on further flooding, risk management firm Moody’s Analytics said.

Sewage releases in the Neuse River were reported as well as overflows at several hog “lagoons,” used to store waste from pig farms.