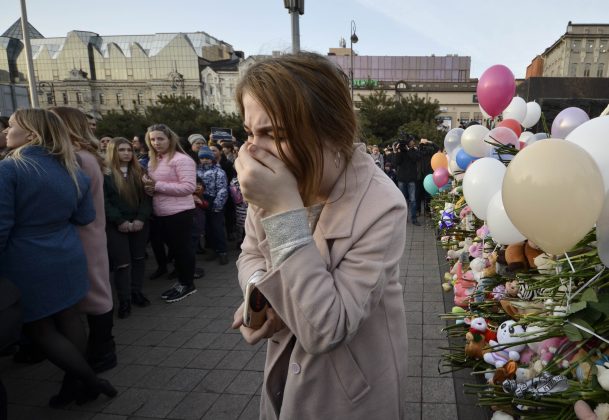 A woman reacts during a gathering to commemorate the victims of a shopping mall fire in Kemerovo on the day of national mourning in the far eastern city of Vladivostok, Russia March 28, 2018. REUTERS/Yuri Maltsev

By Polina Ivanova and Andrew Osborn

KEMEROVO/MOSCOW (Reuters) – Funerals began in Russia on Wednesday for the 64 people, most of them children, whose deaths in a fire at a Siberian shopping mall have roused public anger over official corruption and incompetence.

Flags on government buildings across Russia flew at half mast, state TV and radio stations removed light entertainment shows from their schedules, and lawmakers in Moscow observed a minute of silence.

The fire at the Winter Cherry mall in the city of Kemerovo on Sunday killed 41 children. Investigators have not confirmed the cause of the fire, but the high death toll has been blamed on reported shortcomings in the mall’s safety procedures.

At a funeral service in an Orthodox church in Kemerovo, about 3,600 km (2,200 miles) east of Moscow, women wailed as prayers were sung over three coffins, including two small caskets for children.

All three had gone to see a film at a cinema on the top floor of the shopping center and had been unable to get out of the auditorium when the fire broke out. Russian media reported the doors had been locked.

“This tragedy is made even worse by the fact that children became victims of the blaze. Great grief is upon all of us and there are no words that would express our common pain,” the priest told the mourners, who held candles and repeatedly crossed themselves.

President Vladimir Putin, visiting the disaster scene on Tuesday, promised angry residents that those responsible for what he called criminal negligence would be punished and declared Wednesday a national day of mourning.

Putin on Wednesday ordered similar shopping centers across Russia to be inspected to make sure they were well prepared in the event of a fire.

Some victims’ relatives say they believe a cover-up is under way and that the death toll is higher than 64, something Putin has denied. Investigators on Wednesday said they had opened a criminal case into a Ukrainian prankster who they said had spread disinformation about the death toll.

Investigators say their main theory is that an electrical short circuit caused the fire.

Almost all the bodies have been recovered, many of which could be identified only via DNA testing. A further 14 people remain in hospital.

Russia has rigorous fire safety rules and a system of regular inspections, but these efforts are undermined by endemic corruption which affects many aspects of life in the country of 144 million people.

Moscow reduced the number of inspections for certain businesses after complaints that inspectors were extorting bribes in exchange for turning a blind eye to violations.

But some business owners in Kemerovo said this meant that safety shortcomings were not being identified.

The governor of the region where the fire took place, Aman Tuleyev, sacked two senior officials on Wednesday, the RIA news agency reported.

Investigators have also detained and charged five people over the fire, including a security guard who they accuse of turning off the public address system and the mall’s manager who is accused of violating fire safety regulations.

At least one vigil held in memory of the dead in cities across Russia has turned into an anti-government demonstration.

Some chanted “Putin – resign!”, ten days after Putin secured a comfortable election win for another six-year term in office.