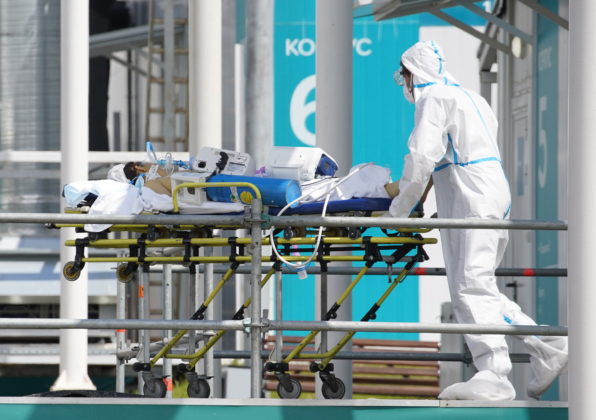 FILE PHOTO: A medical specialist wearing protective gear transports a person on a stretcher at a hospital for patients infected with the coronavirus disease (COVID-19) on the outskirts of Moscow, Russia July 2, 2021. REUTERS/Tatyana Makeyeva

MOSCOW (Reuters) – Russia on Tuesday reported a record 737 deaths from coronavirus-linked causes in the past 24 hours as the country stepped up efforts to vaccinate its population of more than 144 million people.

A new surge in COVID-19 cases in June was blamed on the new, highly infectious, Delta variant. Moscow responded with mandatory vaccination for a wide group of citizens, a model adopted by other regions, sparking wide public discontent ahead of September parliamentary elections.

Health minister Mikhail Murashko said up to 850,000 people were being vaccinated against COVID-19 in Russia every day, and that building immunity across the population was key, the TASS new agency reported.

Murashko said foreign producers of COVID-19 vaccines had applied to register in Russia, without disclosing their names.

Russia has so far offered its own vaccines against the novel coronavirus, launching a mass vaccination campaign in late 2020.

From Wednesday, Russia will change the rules for citizens returning from abroad, scrapping the obligation to undergo two PCR tests upon arrival, a decree published on Tuesday and signed by Anna Popova, head of the consumer health watchdog, showed.

From July 7, all those vaccinated or officially recovered from COVID-19 do not need to take a PCR test. Those who do not fall into these two categories when they enter Russia, will need to self-isolate before receiving results of one PCR test.

The Kremlin said it would not support the idea of closing borders between Russia’s regions to stop the virus from spreading, although some regions may take swift and harsh measures to withstand the pandemic.

The recent surge in COVID-19 cases, along with the need to raise interest rates to combat inflation, are seen challenging economic growth in Russia this year.