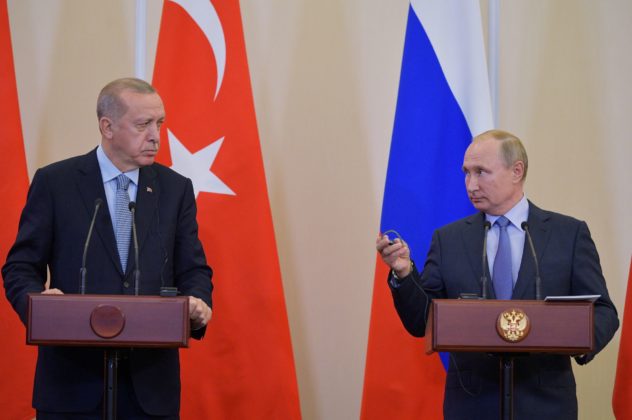 MOSCOW/ANKARA (Reuters) – Russian military police arrived in the strategic Syrian city of Kobani on Wednesday as Moscow warned Kurdish YPG forces that they face further armed conflict with Turkey if they fail to withdraw from Syria’s entire northeastern border.

Russia’s warning came a day after it struck an accord with Turkey calling for the complete pullout of the YPG fighters, which were once U.S. allies but which Ankara calls terrorists.

The police arrival in Kobani marked the start of a period when Russian and Syrian security forces will oversee the removal of YPG fighters at least 30 km (19 miles) into Syria, under the deal struck by presidents Vladimir Putin and Tayyip Erdogan.

A complete pullout of the YPG would mark a victory for Erdogan, who launched a cross-border offensive on Oct. 9 to drive the Syrian Kurdish militia from the border and create a “safe zone” for the return of Syrian refugees.

Russia’s Defence Ministry, quoted by TASS news agency, said the police would help facilitate the YPG withdrawal from Kobani, a border city to the west of Turkey’s military operations. It was vacated by U.S. troops after President Donald Trump’s abrupt decision this month to pull out.

Kobani is of special significance to the Kurdish fighters, who fought off Islamic State militants trying to seize the city in 2014-15 in one of the fiercest battles of Syria’s civil war.

Tuesday’s accord, which expands on a U.S.-brokered ceasefire deal last week, underlines Putin’s dominant influence in Syria and seals the return of his ally President Bashar al-Assad’s forces to the northeast for the first time in years.

Under the deal, Syrian border guards were to deploy there from noon (0900 GMT) on Wednesday.

Six days later, Russian and Turkish forces will jointly start to patrol a 10 km strip of land in northeast Syria where U.S. troops had long been deployed along with their former Kurdish allies.

Those changes reflect the dizzying pace of changes in Syria since Trump announced the U.S. withdrawal on Oct. 6, shaking up the military balance across a quarter of the country after more than eight years of conflict.

Kurdish militia commanders have yet to respond to the deal reached in Russia’s Black Sea resort of Sochi, and it was not immediately clear how their withdrawal could be enforced.

The joint Turkish-Russian statement issued after six hours of talks between Putin and Erdogan said they would establish a “joint monitoring and verification mechanism” to oversee implementation of the agreement.

Kremlin spokesman Dmitry Peskov was more blunt. If Kurdish forces did not retreat, Syrian border guards and Russian military police would have to fall back. “And remaining Kurdish formations would then fall under the weight of the Turkish army,” he said.

In a swipe at Washington, which has called into question how the deal will be guaranteed, Peskov said: “Now they (the Americans) prefer to leave the Kurds at the border and almost force them to fight the Turks.”

The Kurdish-led SDF were Washington’s main allies in the fight to dismantle Islamic State’s self-declared caliphate in Syria. Trump’s decision to pull troops out was criticized by U.S. lawmakers, including fellow Republicans, as a betrayal.

Trump said the ceasefire agreed between Turkey and the United States last week had held, hailing what he called a big success. “Kurds are safe and have worked very nicely with us,” Trump tweeted, adding he would say more later on Wednesday.

In a further sign of growing ties between Ankara and Moscow, which have alarmed Washington, the head of Russia’s defense sales agency was quoted by Interfax news agency as saying Moscow could deliver more S-400 missile defense systems to Turkey.

Turkey, a NATO member, has already been frozen out of a programmer’s to buy and help produce F-35 jets and faces possible U.S. sanctions for buying the S-400 systems, which Washington says are incompatible with NATO’s defenses and threaten the F-35 if operated near the stealth fighter.

Overnight, Turkey’s defense ministry said the United States had told Ankara the YPG had completed its withdrawal from the area of Turkey’s military offensive.

There was no need to initiate another operation outside the current area of operation at this stage, the ministry said, effectively ending a military offensive that began two weeks ago and drew global criticism.

Kay Bailey Hutchison, the U.S. ambassador to NATO, called on Wednesday for an inquiry into whether war crimes were committed during the offensive.

Further criticism of Turkey’s offensive came from European Parliament members who called in a draft resolution for “appropriate and targeted economic measures” against Ankara.

While Tuesday’s deal addresses Turkey’s call for the YPG to be pushed back from the border, it also means Ankara will have to deepen its security coordination with Damascus after years of hostility between Erdogan and Assad.

Foreign Minister Mevlut Cavusoglu said on Wednesday that Turkey had no direct contact with Assad’s government, but “there could be contact at the intelligence level, this is natural.”

Ankara may also have to moderate its own military ambitions in the region. Turkish security sources said Ankara was re-evaluating a plan to set up 12 observation posts in northeastern Syria in the wake of the deal.

That change reflects the fact that Turkey, which had aimed to be the dominant force in the “safe zone” area, will now have to share that territory with Assad and Putin, who have both said Turkish forces cannot remain in Syria in the long term.

“The most significant part of the Russian-Turkish agreement is the arrival of the Syrian border guard to the northeast, something both Damascus and Russia sought for a long time,” said Yury Barmin, a Middle East specialist at Moscow Policy Group.

“This also means de facto recognition of Assad by Erdogan.”