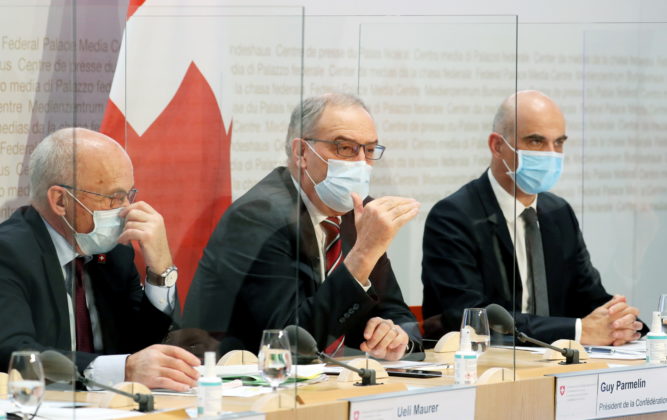 BERN (Reuters) – Switzerland on Wednesday tightened measures to tackle new variants of the COVID-19 virus spreading across the country while stopping short of the full lockdown neighboring countries have adopted to choke off the pandemic.

The wealthy Alpine country also eased rules for pandemic-hit businesses to apply for state aid, which will force the government to ask parliament to top up the latest 2.5 billion Swiss franc ($2.82 billion) pot of money for hardship cases.

Governments across Europe have announced tighter and longer coronavirus lockdowns over fears about a fast-spreading variant first detected in Britain, with vaccinations not expected to help much for another two to three months.

Switzerland, which has so far taken a lighter touch to restricting business and public life, said it will close shops selling non-essential supplies from Monday.

It ordered companies to instruct employees to work from home where possible, or require staff in workplaces with more than one person to wear masks.

It halved the limit on private gatherings to five people. Schools remain open.

Worried by mounting cases of virus mutations that spread more easily, the cabinet extended the closure of restaurants, and cultural and sport sites by five weeks to the end of February, as proposed last week.

New COVID-19 variants were 50% to 70% more infectious than earlier forms, it noted, raising prospects that case numbers could double weekly.

“The government is aware that the measures decided today will have a significant economic impact. We did not take this decision lightly,” President Guy Parmelin told reporters.

Health authorities reported more than 490,000 cases and 7,851 deaths since the pandemic broke out in February 2020.