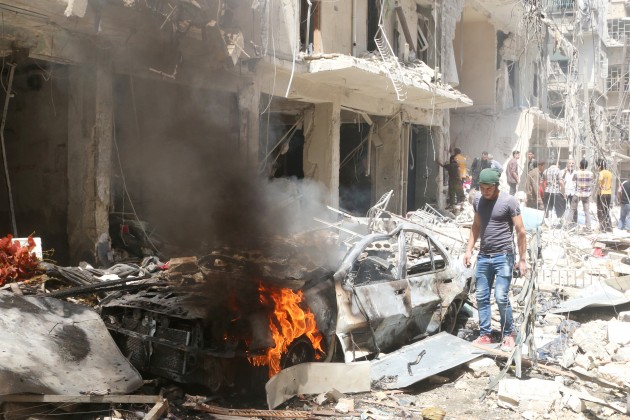 People inspect the damage at a site hit by airstrikes, in the rebel-held area of Aleppo's Bustan al-Qasr, Syria April 28, 2016. REUTERS/Abdalrhman Ismail

By Lisa Barrington and Jack Stubbs

MOSCOW/BEIRUT – (Reuters) – Syria declared brief local truces near Damascus and in one province on Friday but made no mention of halting combat on the main battlefield in Aleppo, after a surge in fighting the United Nations said showed “monstrous disregard” for civilian lives.

The new “regime of calm”, to begin from 1:00 a.m. on Saturday, would last just one day in the capital’s eastern Ghouta suburb and three days in the northern countryside of the coastal province of Latakia, the army said in a statement.

Both districts have seen intensified fighting in recent days. The statement made no mention however of the city of Aleppo, scene of the worst violence, which is divided between rebel-held and government areas. An air strike on an Aleppo hospital killed at least 27 people this week.

Russian news agencies quoted an opposition figure saying the new truce would also apply to Aleppo, but there was no separate confirmation of this.

The Syrian military statement gave no details of the meaning of the term “regime of calm”, but Russia’s Interfax news agency quoted the officer in charge of a Russian ceasefire monitoring center as saying it meant all military action would cease.

Damascus described the truces as an attempt to salvage a wider “cessation of hostilities” agreement. That ceasefire has been in place since February to allow peace talks to take place but has all but completely collapsed in recent days along with the Geneva negotiations.

The U.N. human rights chief, Zeid Ra’ad al-Hussein, said violence was “soaring back to the levels we saw prior to the cessation of hostilities”.

“There are deeply disturbing reports of military build-ups indicating preparations for a lethal escalation,” Zeid said. The reports revealed a “monstrous disregard for civilian lives by all parties to the conflict”, he added.

The United Nations has called on Moscow and Washington to help restore the ceasefire to prevent the collapse of peace talks, which broke up this week in Geneva with virtually no progress after the opposition walked out.

“I DREAD THE HORROR”

“The cessation of hostilities and the Geneva talks were the only game in town, and if they are abandoned now, I dread to think how much more horror we will see in Syria,” Zeid said.

Air strikes on rebel-held areas of Aleppo and shelling of government-held areas of the city resumed on Friday after a brief dawn lull.

At least six people died and more were injured and trapped under fallen buildings in air strikes on Friday on rebel-held areas, the Observatory said.

Bebars Mishal, a civil defense chief working in rebel-held areas of Aleppo, told Reuters there were a number of air attacks in the morning, many of them around mosques in rebel-held areas. Mishal said one hit a clinic in Aleppo’s Al-Marja district.

Syrian state television said people had been killed and wounded and a building set on fire during shelling of government-held quarters in Aleppo, which included a hit on a mosque as people were leaving Friday prayers.