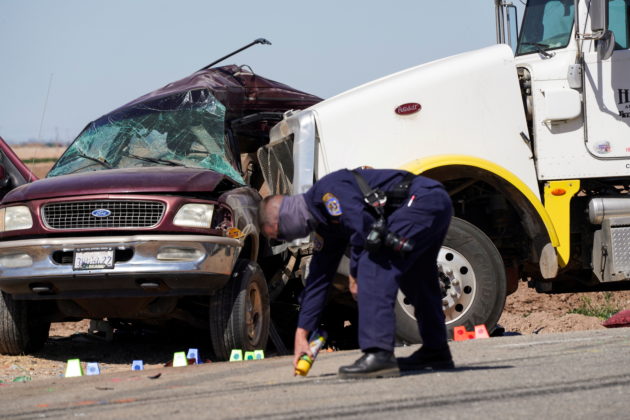 The scene of a collision between a sport utility vehicle (SUV) and a tractor-trailer truck is seen near Holtville, California, U.S., March 2, 2021. REUTERS/Bing Guan

By Sharon Bernstein and Brendan O’Brien

(Reuters) – At least 13 people were killed on Tuesday when a maroon Ford Expedition crammed with 25 adults and children was slammed by a tractor-trailer near the U.S.-Mexico border, officials said.

It was not immediately clear how fast the vehicles were going, or whether the SUV had observed a stop sign before heading into an intersection along State Route 115 near El Centro, about 10 miles (16.1 km) north of the border, the California Highway Patrol (CHP) said.

Those killed, who included the driver of the SUV, ranged in age from 20 to 55, and minors as young as 16 were injured, said Omar Watson, chief of the highway patrol’s border division.

Television images by an NBC affiliate showed the maroon SUV crunched next to a white truck cab with the name Haven and Sons written on the side.

Several of the occupants were ejected from the vehicle and died on the pavement; others died inside the SUV, Watson said.

Despite the presence of U.S. Customs and Border Protection agents and Spanish translators, Watson did not address whether the SUV’s occupants were migrant workers or others who might have crossed from Mexico in an overcrowded vehicle. Most of the survivors are Spanish-speaking, a CBP spokesperson said.

Although the number varies by trim and model year, the Ford Expedition typically is designed to hold five to eight people.

Watson said the CHP was working with the Mexican Consulate to determine who was in the vehicle and notify families of fatalities.

The CBP spokesperson, who was not authorized to publicly discuss the case, said that the agency was not in pursuit of or aware of the vehicle until the Imperial County Sheriff’s Department asked for its help at the crash site.

The agency does not know and is not investigating the immigration status of the people at this time.

The driver of the tractor-trailer, which was hauling two loads of gravel, was also hospitalized with moderate injuries, Watson said.

Several of the victims were taken to El Centro Regional Medical Center, the director of the hospital’s emergency room, Judy Cruz, said in a news briefing posted on Facebook.

Agriculture drives the economy around El Centro. Known as the Imperial Valley, the area is a big producer of fruits, vegetables, grain and cattle despite being desert due to irrigation from the Colorado River and a long growing season.

Hospital officials had previously said that 27 people were in the SUV, and that 15 had died, but Watson said that there were 25 passengers and 13 fatalities.

Three patients were flown to other hospitals from the crash, and seven others were brought to El Centro. One person died at the hospital, Cruz said.

“The patients are going through a little bit of a difficult time as you can imagine,” said Adolphe Edward, chief executive officer of El Centro Regional Medical Center.