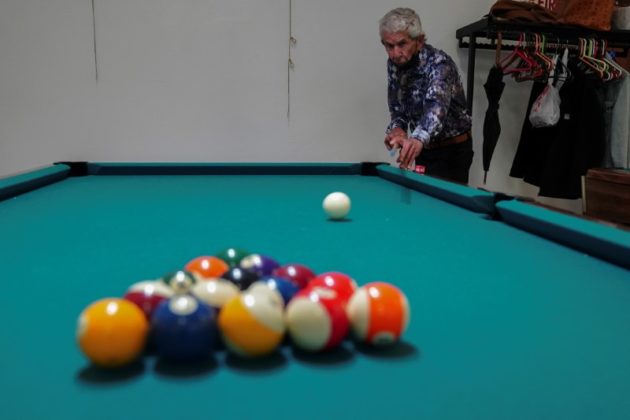 NEW YORK (Reuters) – After more than a year of pandemic-forced separation, 85-year old Justo Fleitas was back at the pool table at his neighborhood’s senior center, finally reunited with a small group of friends and his cue stick.

“It’s beautiful, no words to say how I feel,” said Fleitas, an avid pool player and a regular at the Star Senior Center in Manhattan.

On Monday this week, senior centers in New York City welcomed back the city’s elderly for indoor activities after being closed for more than a year.

Fleitas, who left Cuba for the United States in his 20’s, worked as a barber until he retired more than 20 years ago. After being confined at home with his wife during the coronavirus pandemic that ravaged New York, he said he has been eagerly waiting for the center to reopen.

He was far from alone in that pent up anticipation.

“Before we opened, seniors were already calling, asking for us to reopen,” said Maggie Hernandez, a program coordinator at Star Senior Center. “They were preparing themselves for weeks for this to happen.”

Centers such as the one in the Washington Heights neighborhood of Upper Manhattan are a lifeline for many senior citizens who rely on them for food, companionship and recreation.

When the pandemic shut them down last spring, along with most other activities, some older New Yorkers, at particularly high risk for severe COVID-19, were forced to hunker down at home, often alone.

Staff at Star Senior Center made some 35,000 wellness calls to its seniors who reported suffering from isolation, anxiety and depression, Hernandez said.

‘MISSED HERE SO MUCH’

On the first day of reopening, the center was bustling at lunch hour. Gaggles of seniors gathered around the large tables spread out around the room, filling the place with animated conversations for the first time in more than a year.

Helen Anderson started frequenting the Star Senior Center a few years ago, attracted by its diversity. When the pandemic hit, Anderson said she “tried to survive” by speaking on the phone with the center’s staff.

“Oh my goodness, I missed here so much,” said Anderson, 72, as she tucked a face covering under her glasses to keep it from sliding down.

Anderson, who lives alone, said she started seeing her daughter in person during the Christmas holidays late last year, although she did not allow her inside the apartment for fear of getting sick.

“Seniors bore the brunt of the COVID crisis, they were the most vulnerable,” the mayor said at the time of the announcement.

New Yorkers 75 and older were hospitalized for COVID-19 at rates four times higher than the rest of the population and died at seven times the rate of the rest of the residents, city health data shows https://www1.nyc.gov/site/doh/covid/covid-19-data-totals.page#summary.

About 128 of the 250 senior centers in the Department for the Aging’s (DFTA) network were reopening as of late Tuesday, according to a spokesperson for the department.

Some centers were still wrestling with the logistics of how to safely resume operations as they are open to both vaccinated and unvaccinated seniors.

Prior to the pandemic, up to 70 seniors would frequent that center daily, said LeWarn. But having a tight space with few windows was one of the hurdles to a safe reopening, despite seniors’ excitement.

Despite the rain, more than 40 members showed up to Star on Monday. About 150 seniors would frequent the center on a typical day before the pandemic, Hernandez said.

A small but determined group of elderly women stretched with the aid of chairs and moved to the beat of blaring Latin music, taking their cue from an instructor who shouted words of encouragement into a microphone.

“We’re all so thrilled to be back,” Hernandez said.