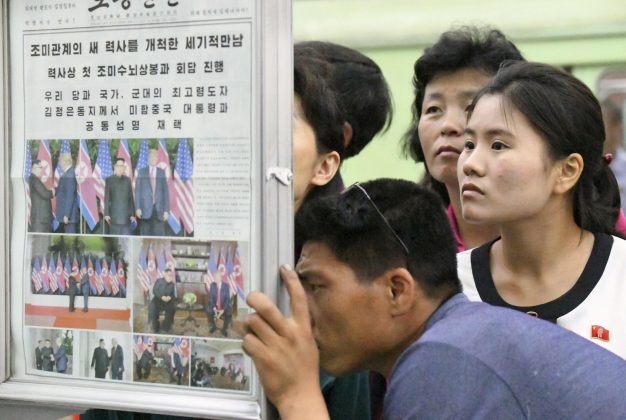 North Koreans watch the displayed local newspapers reporting the summit between the U.S. and North Korea at a subway station in Pyongyang, North Korea, in this photo taken by Kyodo June 13, 2018. Mandatory credit Kyodo/via REUTERS

SEOUL (Reuters) – North Korea no longer poses a nuclear threat, nor is it the “biggest and most dangerous problem” for the United States, President Donald Trump said on Wednesday on his return from a summit in Singapore with North Korean leader Kim Jong Un.

The summit was the first between a sitting U.S. president and a North Korean leader and followed a flurry of North Korean nuclear and missile tests and angry exchanges between Trump and Kim last year that fueled fears of war.

“Everybody can now feel much safer than the day I took office,” Trump said on Twitter. 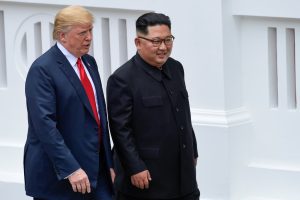 “There is no longer a nuclear threat from North Korea. Meeting with Kim Jong Un was an interesting and very positive experience. North Korea has great potential for the future!”

On Tuesday, Trump told a news conference after the summit that he would like to lift sanctions against the North but that this would not happen immediately.

North Korean state media lauded the summit as a resounding success, saying Trump expressed his intention to halt U.S.-South Korea military exercises, offer security guarantees to the North and lift sanctions against it as relations improve.

Kim and Trump invited each other to their respective countries and both leaders “gladly accepted,” the North’s Korean Central News Agency (KCNA) said.

“Kim Jong Un and Trump had the shared recognition to the effect that it is important to abide by the principle of step-by-step and simultaneous action in achieving peace, stability and denuclearization of the Korean Peninsula,” KCNA said.

“We save a fortune by not doing war games, as long as we are negotiating in good faith – which both sides are!” he said on Twitter.

“It’s not a burden onto the American taxpayer to have a forward deployed force in South Korea,” Graham told CNN.

“It brings stability. It’s a warning to China that you can’t just take over the whole region. So I reject that analysis that it costs too much, but I do accept the proposition, let’s stand down (on military exercises) and see if we can find a better way here.”

Speaking in Beijing, Chinese Foreign Ministry spokesman Geng Shuang said he hoped all parties could “grasp the moment of positive changes” on the peninsula to take constructive steps toward a political resolution and promoting denuclearization.

“At this time, everyone had seen that North Korea has halted missile and nuclear tests, and the United States and South Korea have to an extent restricted their military actions. This has de facto realized China’s dual suspension proposal,” he told a daily news briefing.

“When it comes to Trump’s statement yesterday that he would halt South Korea and the United States’ military drills, I can only say that China’s proposal is indeed practical and reasonable, is in line with all sides’ interests and can resolve all sides’ concerns.”

There was some confusion over precisely what military cooperation with South Korea Trump had promised to halt.

The U.S.-South Korean exercise calendar hits a high point every year with the Foal Eagle and Max Thunder drills, which both wrapped up last month. Another major exercise is due in August.

The United States maintains about 28,500 soldiers in South Korea, which remains in a technical state of war with the North after the 1950-53 Korean War ended in a truce not a peace treaty.

Trump’s announcement on the exercises was a surprise even to South Korea’s President Moon Jae-in, who has worked in recent months to help bring about the Trump-Kim summit.

Asked about Trump’s comments, South Korean presidential spokesman Kim Eui-kyeom told reporters there was a need to seek measures that would help improve engagement with North Korea but it was also necessary to confirm exactly what Trump had meant.

Moon will be chairing a national security meeting on Thursday to discuss the summit.

Trump’s administration had previously ruled out any concessions or lifting of sanctions without North Korea’s commitment to complete, verifiable and irreversible steps to scrap a nuclear arsenal that is advanced enough to threaten the United States.

But a joint statement issued after the summit said only that North Korea “commits to work toward the complete denuclearization of the Korean peninsula”.

U.S. Secretary of State Mike Pompeo, who is to lead the U.s. side in talks with North Korea to implement outcomes of the summit, arrived in South Korea on Wednesday, to be greeted by General Vincent Brooks, the top U.S. commander in South Korea, and U.S. Charge d’Affaires Marc Knapper.

On Tuesday, just after Trump’s surprise announcement, a spokesman for U.S. Forces Korea said they had not received any instruction to cease joint military drills.

Although the Pentagon said Defence Secretary Jim Mattis was consulted, current and former U.S. defense officials expressed concern at the possibility the United States would halt the exercises without an explicit concession from North Korea lowering the threat.

CRITICS IN THE UNITED STATES

Critics in the United States said Trump had given away too much at a meeting that gave Kim long-sought international standing.

The North Korean leader had been isolated, his country accused of widespread human rights abuses and under U.N. sanctions for its nuclear and ballistic missile programs.

“For North Korea, they got exactly what they wanted,” said Moon Seong-mook, a former South Korean military official current head of the Unification Strategy Centre in Seoul.

“They had a summit as a nuclear state with Kim on equal turf with Trump, got the United States to halt joint military exercises with South Korea. It’s a win for Kim Jong Un.”

Japan’s Minister of Defence Itsunori Onodera said that, while North Korea had pledged denuclearization, no concrete steps had been taken and Japan would not let down its guard.

“We see U.S.-South Korean joint exercises and the U.S. military presence in South Korea as vital to security in East Asia,” Onodera told reporters. “It is up to the U.S. and South Korea to decide about their joint exercises. We have no intention of changing our joint drills with the U.S.”

The Singapore summit did not get top billing in the main state news outlets in China.

The English-language China Daily said in an editorial that while it remained to be seen if the summit would be a defining moment, the fact it went smoothly was positive.

“It has ignited hopes that they will be finally able to put an end to their hostility and that the long-standing peninsula issues can finally be resolved. These hopes should not be extinguished,” it said.