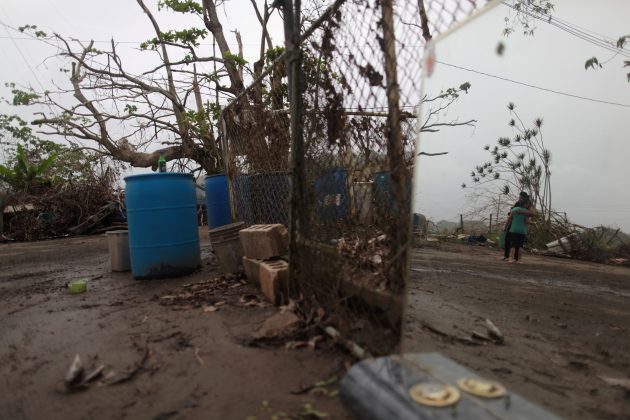 People hug as they are reflected in a mirror, after Hurricane Maria hit the island in September, in Toa Baja, Puerto Rico October 18, 2017. REUTERS/Alvin Baez

WASHINGTON (Reuters) – President Donald Trump said on Thursday he will work with the U.S. Congress to approve grants and loans to help rebuild Puerto Rico after it was devastated by Hurricane Maria a month ago.

Already mired in debt after years of recession, the U.S. territory faces storm-related damages that some estimates have pegged as high as $95 billion, and has asked the federal government to make exceptions to rules that typically require states and local governments to shoulder part of the cost of recovery.

Trump did not give any specifics about how much money the government may give or loan to the cash-strapped territory, home to 3.4 million U.S. citizens.

“I have given my blessing to Congress, and Congress is working with you and your representatives on coming up with a plan and a payment plan and how it’s all going to be funded. Because you are talking about some substantial numbers,” Trump said to Puerto Rico Governor Ricardo Rossello at the beginning of an Oval Office meeting.

Trump and some of his top aides suggested last week that there would be limits to how much help Puerto Rico could expect from Washington. But on Thursday, the president’s remarks were broadly supportive.

The hurricane laid waste to the island’s power grid, destroying homes, roads and other vital infrastructure. The bankrupt territory is still struggling to provide basic services like running water. An oversight board charged with resolving Puerto Rico’s debt crisis has said the island’s government would run out of money by the end of the month without help.

Trump emphasized that repayment of federal loans and other storm-related debt owed by Puerto Rico would come before repayment of the island’s existing $72 billion in debt.

“Any money that’s put in by people – whether it’s public or private – they’re going to want to come in first position,” Trump said.

“We’re going to coming before – far before – any existing debt that’s on the island,” he said.

Trump declined to opine on whether the process would be easier if Puerto Rico were a state rather than a territory – a hot-button political issue on the island.

“You’ll get me into trouble with that question,” he told a reporter.

While in Washington, Rossello also met with Senate leaders. The Senate is expected to vote in coming days on an aid package that includes $18.7 billion for the Federal Emergency Management Agency, which has been helping Texas, Florida, Puerto Rico, and the U.S. Virgin Islands recover from three massive hurricanes.

Some senators would like to see more funds added to that package, Senator John Thune, a member of the Republican leadership, told reporters.

Senator Marco Rubio, a Republican from Florida who has been deeply involved in discussions over the aid, said earlier on Thursday that he wants to tweak the bill so the island could more quickly access funds.

Congress is expected to consider another aid package by the end of December, but that could be too late for the island, which currently has no tax revenue, Rubio said.

“I know from experience the further away we get from these hurricanes, the less of a sense of urgency there is,” Rubio said.

Rossello has asked the federal government for approval to use disaster aid to cover a broad range of costs. He has also asked the White House and Congress for at least $4.6 billion in block grants and other types of funding.

“The reality is that we still need to do a lot more for the people of Puerto Rico and that’s why we’re meeting,” Rossello said.

“This is not over, not over by a long shot.”