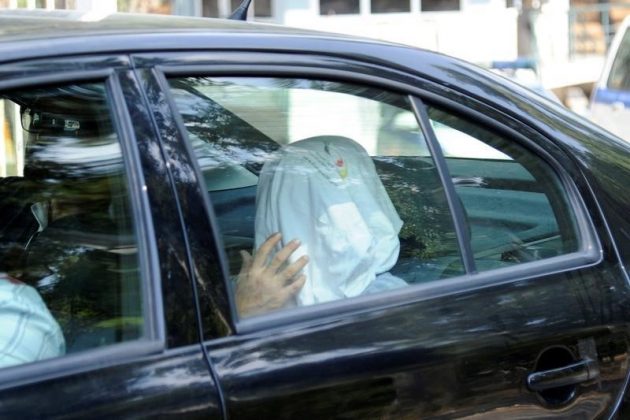 One of the eight Turkish soldiers, who fled to Greece in a helicopter and requested political asylum after a failed military coup against the government, is seen in a police car with his face covered, after his interview for asylum request at the Asylum Service in Athens, Greece, August 22, 2016. REUTERS/Michalis Karagiannis

About 80,000 people in the police, military, judiciary and civil service have been sacked or suspended since the failed July 15 coup, when a group of rogue soldiers attempted to topple the government. Turkey says followers of U.S.-based cleric Fethullah Gulen were behind the attempt.

Gulen, who has lived in self-imposed exile in rural Pennsylvania since 1999, denies the charge and has condemned the coup.

Separately, photos published by state-run Anadolu Agency showed lorries draped with Turkish flags hauling armored vehicles, covered in tarpaulin, out of barracks in Istanbul and Ankara, to be taken to locations outside the cities.

Under a decision taken after last month’s coup, all military barracks within the two cities are to be moved elsewhere by Sept. 11.

Istanbul and Ankara are to be transferred outside the cities by Sept. 11. Anadolu said armored vehicles from the 66th mechanized infantry brigade were transported out of the Bastabya barracks in Istanbul. It said the transfer of military vehicles would continue.

Coup plotters had commandeered vehicles from the Bastabya barracks on the night of the coup, sending them to Istanbul’s Ataturk Airport and the police headquarters.

Turkey’s Supreme Military Council, which normally meets just twice a year, was to convene for the second time in a month on Tuesday as part of the government’s plan to overhaul the armed forces and bring it fully under civilian control.

Prime Minister Binali Yildirim was to chair the council meeting, starting at 10 a.m. (0700 GMT) on Tuesday, sources from his office said. No statement has yet been issued on the agenda of Tuesday’s meeting.