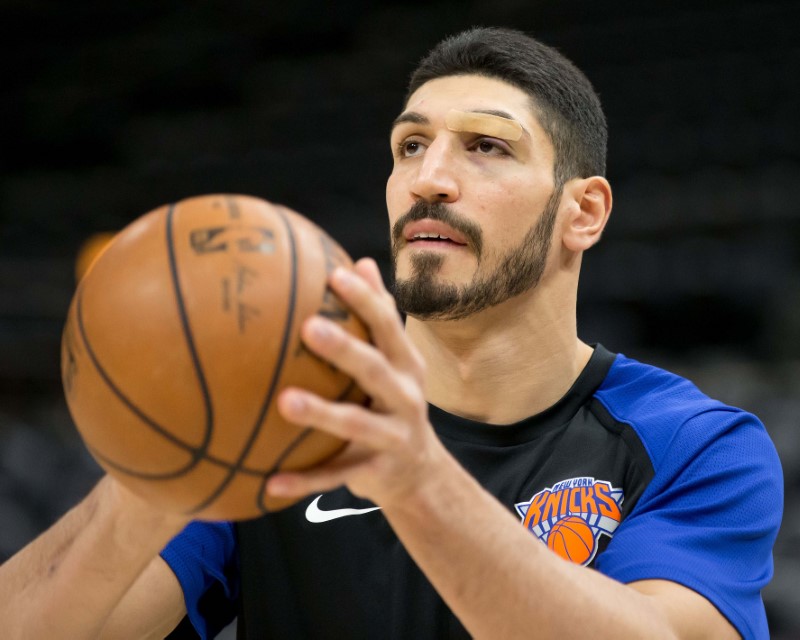 Kanter, a vocal critic of President Tayyip Erdogan, was indicted by a Turkish court last year over alleged membership of an “armed terrorist group” after being contacted repeatedly by people close to Islamic preacher Fethullah Gulen.

The Istanbul prosecutors’ office was not immediately available to comment on the report on Wednesday.

Anadolu said on Tuesday prosecutors had sought the issue of a “red notice” for Kanter, an Interpol request to locate and provisionally arrest an individual pending extradition.

It said the extradition request includes social media comments made about Gulen by Kanter, who has often declared his support for the cleric.

“The Turkish Government can NOT present any single piece of evidence of my wrongdoing,” he said. “I don’t even have a parking ticket in the U.S. (True)

“I have always been a law-abiding resident.”

He later added: “The only thing I terrorize is the rim.”

Turkey previously revoked Kanter’s passport and declared him a fugitive for his support of Gulen, whom Ankara accuses of being behind the attempted putsch of July 2016 – an accusation Gulen denies.

In May 2017, Kanter was refused entry into Romania because of the cancellation of his Turkish passport.

Earlier this month, Kanter said he would not go to London for a game with his NBA team because he fears he could be assassinated for criticizing Erdogan.

“If it’s for his own safety I don’t want to see a guy get harmed,” Washington Wizards Sam Dekker, who will be up against the Knicks in London, told Reuters.

“Hopefully it will get worked out with him but it’s a tough situation. It’s never a good thing to see a guy not playing for personal reasons.”

Since the putsch attempt, some 77,000 people have been jailed pending trial and 150,000 state employees including teachers, judges and soldiers have been suspended or dismissed in a crackdown on alleged supporters of Gulen.

Kanter holds a U.S. green card that allows him to live and work in the country on a permanent basis. 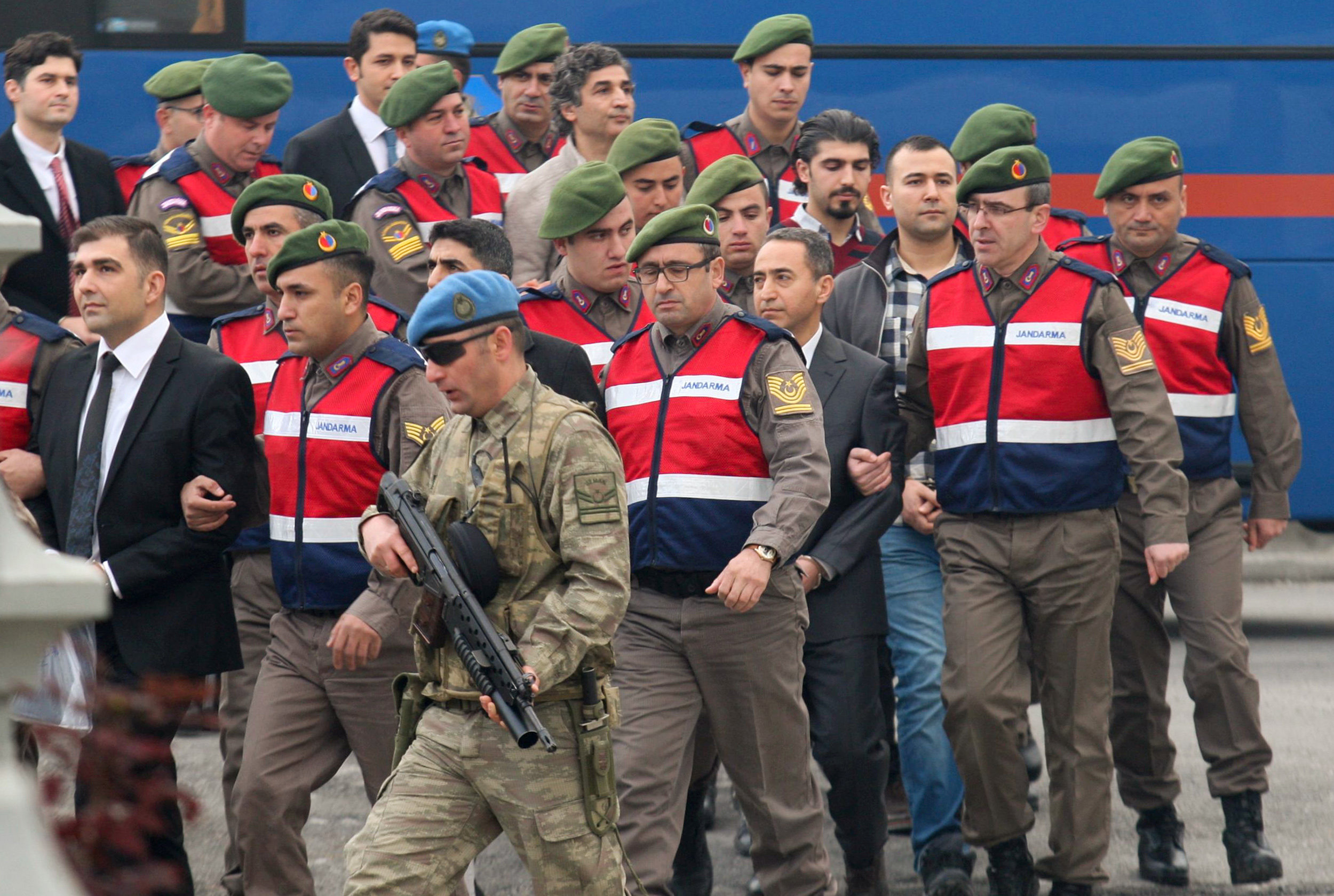 MUGLA, Turkey (Reuters) – Prosecutors called for life sentences for more than 40 Turkish soldiers on Monday at the start of their trial for attempting to assassinate President Tayyip Erdogan during last year’s failed coup, according to the indictment obtained by Reuters.

Under tight security, the defendants were bussed in to a courthouse in the southwestern city of Mugla, not far from the luxury resort where Erdogan and his family narrowly escaped the soldiers, fleeing in a helicopter shortly before their hotel was attacked.

More than 240 people were killed during the July 15 failed coup, when a group of rogue soldiers commandeered tanks, warplanes and helicopters, attacking parliament and attempting to overthrow the government.

On Monday, prosecutors in Mugla charged 47 suspects, almost all of them soldiers, with charges including attempting to assassinate the president, breaching the constitution and membership of an armed terrorist organization.

It was not immediately clear how all the suspects would plead. One of the first defendants to testify admitted to accepting a mission to seize, but not kill, Erdogan.

“My mission was to take the president and bring him to Akinci air base safe and sound,” Gokhan Sonmezates told the court, referring to a base outside Ankara that briefly functioned as a command center for the coup plotters.

Turkey says the coup was orchestrated by a U.S.-based Muslim cleric, Fethullah Gulen. The cleric, who has lived in self-imposed exile in Pennsylvania since 1999, has denied the charges and condemned the coup.

Since the failed coup, more than 40,000 people have been arrested and more than 100,000 have been sacked or suspended from the military, civil service and private sector.

Turkey launched its first criminal trial related to the coup in December and more trials are expected.

Sonmezates, a former brigadier general, was described in the indictment as a leader of the mission, something he denied in court. He also denied charges that he was a member of Gulen’s network.

“It was for the country, for the nation, to stop the decay domestically, to put an end to the bribery, to protect my country from the PKK,” he told the court, referring to the militant Kurdistan Workers Party (PKK).

The suspects, who include Erdogan’s former aide-de-camp, were wearing suits when they were brought from prison to the courthouse. They were met by a crowd of some 200 people waving flags and calling for their execution.

“We want the death penalty. Let the hand that tried to harm our chief be broken,” said one of the protesters, 61-year-old Zuhal Ayhan, referring to Erdogan. “I’d give my life for him.”

Turkey formally abolished the death penalty as part of its 2002 European Union accession talks. Since the coup, crowds have repeatedly called for it to be restored, a move that would likely spell the end of Turkey’s bid to join the EU.

The area around the courthouse was cordoned off and patrolled by dozens of security force members, including police and special forces. Snipers stood on nearby rooftops.

Forty-four defendants were brought in, while three remain at large and are being tried in absentia. The courthouse in Mugla was too small to handle the number of defendants and authorities said the trial was being heard at the conference room of the chamber of commerce next door.

According to the indictment, some 37 soldiers were charged with a having a direct role in the storming of the luxury Grand Yazici Club Turban, others are those who provided assistance to the operation.

The soldiers in helicopters descended on the hotel in Marmaris, on ropes, shooting, just after Erdogan had left.

In an interview with Reuters after the coup, Erdogan said his faith as a Muslim helped him and his family escape unscathed. 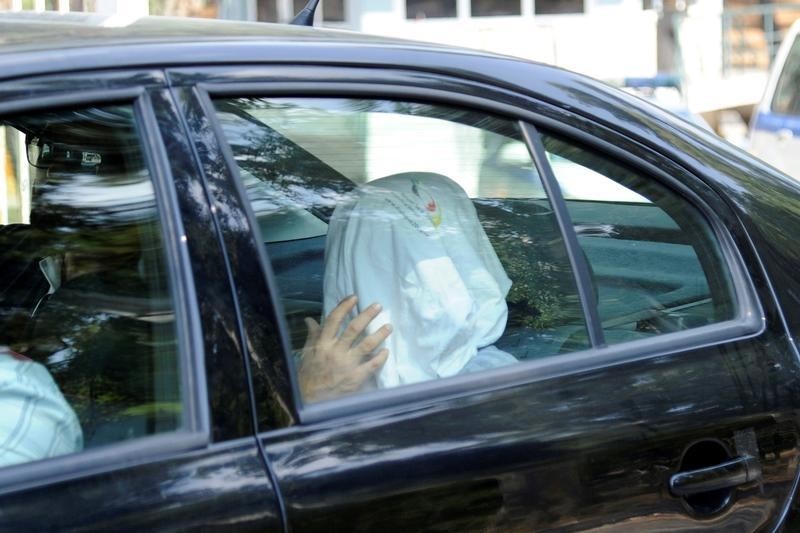 About 80,000 people in the police, military, judiciary and civil service have been sacked or suspended since the failed July 15 coup, when a group of rogue soldiers attempted to topple the government. Turkey says followers of U.S.-based cleric Fethullah Gulen were behind the attempt.

Gulen, who has lived in self-imposed exile in rural Pennsylvania since 1999, denies the charge and has condemned the coup.

Separately, photos published by state-run Anadolu Agency showed lorries draped with Turkish flags hauling armored vehicles, covered in tarpaulin, out of barracks in Istanbul and Ankara, to be taken to locations outside the cities.

Under a decision taken after last month’s coup, all military barracks within the two cities are to be moved elsewhere by Sept. 11.

Istanbul and Ankara are to be transferred outside the cities by Sept. 11. Anadolu said armored vehicles from the 66th mechanized infantry brigade were transported out of the Bastabya barracks in Istanbul. It said the transfer of military vehicles would continue.

Coup plotters had commandeered vehicles from the Bastabya barracks on the night of the coup, sending them to Istanbul’s Ataturk Airport and the police headquarters.

Turkey’s Supreme Military Council, which normally meets just twice a year, was to convene for the second time in a month on Tuesday as part of the government’s plan to overhaul the armed forces and bring it fully under civilian control.

Prime Minister Binali Yildirim was to chair the council meeting, starting at 10 a.m. (0700 GMT) on Tuesday, sources from his office said. No statement has yet been issued on the agenda of Tuesday’s meeting.