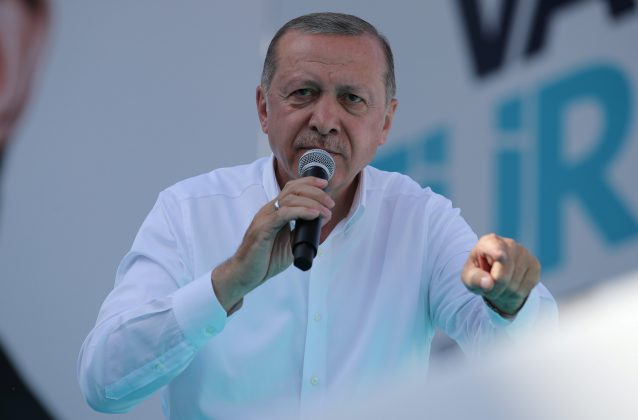 Turkey’s army has ramped up operations in northern Iraq, with the aim of destroying Kurdistan Workers Party (PKK) bases in the Qandil mountains, where high-ranking members of the militant group are thought to be located. At the weekend the military said it destroyed 14 PKK targets in air strikes.

“We have started our operations on Qandil,” Erdogan said during an election rally in the central province of Nigde.

“Qandil will not be a threat, a source of terror for our people any more. We will drain the terror swamp in Qandil as we did in Afrin, Jarablus, Azaz, al-Bab.”

He was referring to areas in northern Syria where the Turkish army and its Syrian rebel allies have fought against Islamic State militants and a Kurdish militia. Ankara is particularly worried about the presence of the U.S.-backed Syrian Kurdish YPG militia near its southern border.

Ankara considers the militia to be an extension of the outlawed PKK, which has carried out a three-decade insurgency in Turkey’s largely Kurdish southeast. The PKK is considered a terrorist group by Europe, the United States and Turkey.

Iraqi Prime Minister Haider al-Abadi said last week that Baghdad was ready to cooperate with Ankara to prevent attacks from Iraq into Turkey. He also called on Turkey to “respect Iraqi sovereignty” and accused Turkish politicians of raising tensions for domestic purposes ahead of June 24 elections.

Erdogan has also vowed to extend military operations in Syria if need be, a stance that has caused friction with NATO ally the United States, which has backed the YPG in the fight against Islamic State.