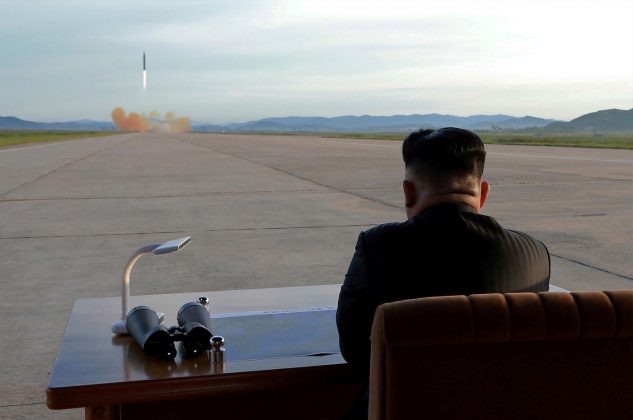 SEOUL (Reuters) – When Donald Trump meets North Korean leader Kim Jong Un on Tuesday for perhaps the most significant nuclear talks since the Cold War, the American president will have his link to the U.S. nuclear arsenal nearby at all times.

As the leader of a newly minted nuclear state, much less is known about how Kim maintains control of his nuclear arsenal while he travels.

Kim began the year by declaring to the world that “a nuclear button is always on the desk of my office,” which was widely interpreted as an allusion to his personal control over North Korea’s nuclear arsenal.

Trump fired back in a tweet, saying “I too have a Nuclear Button, but it is a much bigger and more powerful one than his, and my Button works!”

When the two meet in Singapore for high-stakes nuclear negotiations, Trump will be accompanied, as always, by a staffer carrying his “button” in the form of the “nuclear football” containing equipment used to authorize a strike.

North Korea is one of the most insular states in the world and command and control of its nuclear facilities is kept within a tight, impenetrable circle.

Additionally, Kim – who came to power in 2011 – has only just begun making trips outside North Korea. He has been to Beijing twice and has briefly crossed the frontier at the Demilitarized Zone with South Korea to meet its president. Singapore will be the furthest he is known to have traveled since taking over.

But analysts who closely watch North Korea believe it is unlikely Kim would have come to Singapore without being confident of the arsenal’s security – and the ability to order its use.

“We don’t know how developed North Korea’s secure communications capabilities are, so whether Kim Jong Un will be within easy reach of his National Command Authority during his stay in Singapore is an open question,” said Andrew O’Neil, a North Korea nuclear policy expert at Griffith University in Queensland, Australia.

“That said, given that most assume… North Korea’s nuclear command, control, communications and intelligence is configured to promote a high degree of centralization in Kim’s decision-making, it beggars belief that Kim would not be within secure reach to authorize a possible launch if required,” O’Neil added.

Kim likely delegated authority to watch over the arsenal to one of a number of trusted North Korean officials who stayed in Pyongyang, including Choe Ryong Hae, one of several senior leaders who saw Kim off at the airport as he departed for Singapore, said Michael Madden, a leadership expert with the 38 North website, which monitors North Korea.

“Kim can authorize or approve a missile strike while he is away,” Madden said. “There’s a protocol for launches.”

Trusted officials would maintain control of fixed telecommunications hotlines in the country, and there is likely a code system to activate the systems involved in launching North Korea’s ballistic missiles.

“There are only certain designated facilities where these communications can be activated,” Madden said

Many questions remain unanswered, however, including whether the North Koreans have robust enough communication systems to make sure no one panics and launches an attack, said Vipin Narang, an associate professor at the Massachusetts Institute of Technology’s Security Studies Program.

“Its command and control structure while Kim is traveling is unlikely to be robust enough for him to be able to reliably issue or stop launch sequences,” he said.

He said that was because North Korea was likely to have configured its nuclear forces to permit rapid authorization to launch in order to offset the risk of a first strike from the United States.