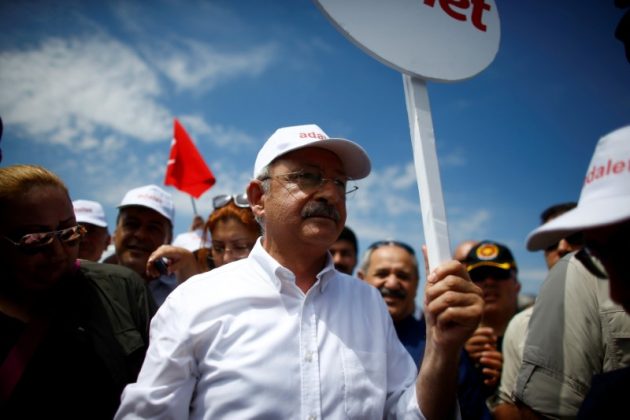 CAMLIDERE, Turkey (Reuters) – Turkey’s main opposition leader accused President Tayyip Erdogan on Tuesday of meddling in the judiciary and called him a “dictator”, as he extended his cross-country protest march against the jailing of a parliamentary ally into a sixth day.

Kemal Kilicdaroglu, 68, head of the secularist Republican People’s Party (CHP), set out last week from the capital Ankara on a 425-km (265-mile) march to Istanbul after fellow party member Enis Berberoglu was jailed for 25 years on spying charges.

Berberoglu was the first CHP lawmaker to be imprisoned in a government crackdown that followed the abortive military coup in July 2016. More than 50,000 people have been jailed and more than 150,000 sacked or suspended from their jobs.

“I will always be on the side of justice. If someone tells me my rights are a favor, I will speak of his dictatorship. I say you (Erdogan) are a dictator,” Kilicdaroglu said in a speech after stopping at a national park near Camlidere, a rural area about 100 km outside of Ankara.

His comments were an apparent response to criticism from Erdogan over the weekend in which the president said justice should be sought in parliament and the CHP was only being allowed to march as a favor from the government.

Erdogan has likened the protesters who came out in support of Kilicdaroglu in Ankara and Istanbul to those who carried out the attempted coup, and said, “You should not be surprised if you receive an invitation from the judiciary.”

Kilicdaroglu responded on Tuesday by accusing the president of attempting to influence the judiciary. “If I prove that your government sends notices to the courts and gives them orders, will you resign your post like an honorable man?” he said.

Rights groups and government critics, including members of Kilicdaroglu’s CHP, say Turkey has been sliding toward authoritarianism since the coup bid. The government says its crackdown is necessary given vast security threats it is facing.

“I have been participating in the march since the beginning,” said one woman, 59, who declined to give her name. “We want justice for our children. This is the only reason we are marching.”

The slight, bespectacled Kilicdaroglu has so far clocked up a little more than 100 km, trudging along a highway westwards from Ankara and at times carrying a sign that says “Justice”.

CHP officials said he was eating only soup in the morning and over the course of the day the same food given to the roughly 1,000 other supporters marching with him.

He alternates between two pairs of trainers and at night massages his feet with salt to soothe the swelling. He sleeps overnight in a caravan specially prepared for him.

Kilicdaroglu, who aims to march to the jail where Berberoglu is being held, on Tuesday condemned the government’s purges, naming academics he said had been stripped of their posts for no reason and asking why journalists were being jailed.

Some 160 journalists are imprisoned in Turkey, according to the journalists union, and authorities have shut down 130 media outlets since the failed coup.

“Shoulder-to-shoulder against fascism,” and “justice, justice” chanted the crowd of around 1,000 on a hillside who listened to his speech. Some carried a banner that said: “You’ll never walk alone”.

The march is expected to last around 25 days, with participants walking some 16-20 km daily.